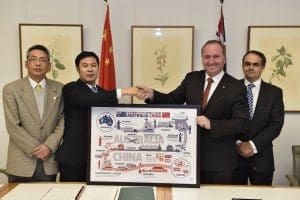 Years in the making, the much-anticipated and long-awaited opening of a live export trade for feeder and slaughter cattle from Australia to China has just been confirmed by Minister for Agriculture, Barnaby Joyce, this afternoon.

Minister Joyce said the Australian and Chinese veterinary authorities were in the process of formalising agreement on animal health certification requirements, which would allow industry to begin to prepare the commercial and ESCAS arrangements for trade to commence.

“I was very pleased today to sign the agreement of health conditions for trade of Australian feeder and slaughter cattle to China—now it’s over to my counterpart, Minister Zhi Shuping, to sign on the dotted line and finalise the agreement between our two nations,” Minister Joyce said.

“Over the past five years we’ve had a significant trade in breeder cattle with China, primarily for dairy heifers. Now, I’m pleased to announce we are a step closer to the commencement in trade in live slaughter and feeder cattle to China.

“Getting the groundwork right for any new market can take time, and now the industry can prepare to begin this trade.

“This will be the seventh livestock slaughter cattle export market that I’ve opened since becoming Minister— adding to Lebanon, Bahrain, Egypt, Iran, Cambodia and Thailand.

“Market access is a major priority for the Australian Government—we have sent a clear message—Australia is open for business. 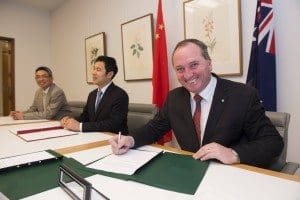 “And it’s not just our cattle producers who are experiencing greater market access opportunities, with the announcement earlier this year of agreed health protocols for breeder deer to Malaysia, and breeder sheep and goats to the Philippines.

“The Australian Government has worked hard to make sure our livestock producers and exporters have every opportunity to trade with other nations.

“Once the agreement is formalised, exporters will be able to begin working with importers in China to implement the Exporter Supply Chain Assurance System (ESCAS) and establish supply chains that meet those requirements.

“This industry is a real Australian success story. We are known world-wide for our high-quality and reliable livestock trade, and now industry has another opportunity for trade to increase,” Minister Joyce said.

Stay tuned to Beef Central for more details on the landmark new trade agreement and what it will mean to Australia’s cattle industry on Tuesday.