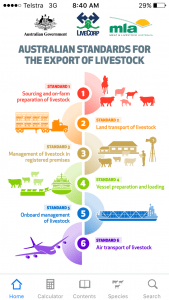 A new app makes it easier for anyone along the livestock export supply chain, from producers to on-board stock handlers, to access important regulatory information when exporting livestock.

The new app puts the full details of the Australian Standards for the Export of Livestock (ASEL) at people’s finger tips.

“It is a great resource for the whole industry, from the producer understanding their selection and preparation requirements on-farm right through to the head stockperson managing livestock on-board or in the air,”Australian Livestock Exporters’ Council CEO Alison Penfold said.

“The app means you can have handy access to check the standards anywhere and anytime as you don’t need wi-fi to access it once downloaded.”

Frontier International Live Export Officer – South East Asia, Cameron Jenkins, who uses ASEL on a daily basis, said it is valuable to have the standards so readily available in the form of an app.

Previously, Mr Jenkins said he carried around the ASEL book, or took photographs of important stocking density and fodder requirement calculations on his phone so they were at hand.

“The calculators are a really good reference point for when you’re on the run and it makes it easier to make decisions rather than running the risk of an error from pen and paper calculations,” Mr Jenkins said.

“For someone like me who uses ASEL daily, we do know it fairly well, but it is handy to be able to have ASEL in my back pocket to refer to if I need to check something or if somebody has a question.” 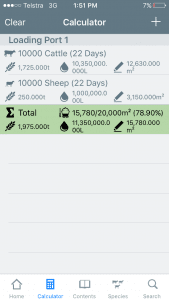 A screenshot of the new app.

The app has been developed jointly by LiveCorp and Meat & Livestock Australia under the Livestock Export Program and includes feed, fodder, water and stocking density calculators and covers cattle, sheep, goats, buffalo, deer and camelids (camels, llama, alpacas and vicunas).

“This project forms part of our extensive $2.9 million suite of research initiatives across a wide range of issues in the trade with animal welfare improvements to core focus of the RD&E program,” LiveCorp Chief Executive Officer Sam Brown said.

“The development of the app demonstrates technological innovation from industry and complements the work we did in developing the Veterinary Handbook app,” Mr Brown said.

“Already the LEP is considering improvements to the ASEL app to create further efficiencies for industry and is looking at ways to adopt improvements to standards over and above ASEL,” he said.

The launch of the app comes as the livestock export industry prepares for its industry conference, LIVEXchange, in Darwin next week. The app is available for download through the Apple and Google Play stores for free.