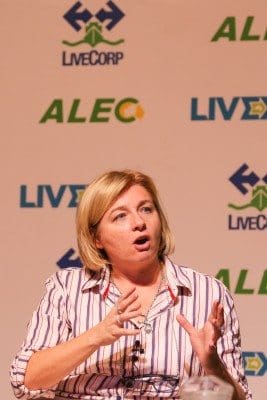 Australian Livestock Exporters’ Council chief executive Alison Penfold said ALEC was scoping out such a body, based on ‘shared values’ as a ‘good global citizen’.

At a Victorian Farmers Federation dinner and policy Forum in Hamilton last night Ms Penfold said other countries have not avoided the animal welfare scrutiny that Australia’s live export industry has been under.

She said the animal activism “wave” hasn’t hit other countries, though it is significantly greater in Australia.

“It is going to hit those countries… they have got this coming like a steam train and they aren’t prepared for it,” she said.

“In the face of competitive disadvantage, how do we try to change the scenario?

“We try to find companies that are susceptible to that welfare wave and help them into a better welfare system.”

Ms Penfold said ALEC had developed the Livestock Global Assurance Program — “the ESCAS you get when you spend more than six weeks in a crisis situation trying to design live export regulation.”

LGAP is intended to be a quality assurance system managed by an independent program owner to be able to supply assurance of compliance with ESCAS to the government, she said.

“What this system is, will be global.

“Any facility anywhere will be able to be certified under the program and that is a game-changer in animal welfare internationally, because there is no system like it.”

Could welfare advances have occurred without regulation?

Ms Penfold gave a careful answer when asked if the animal welfare achievements of the industry since the 2011 Indonesian live cattle trade ban could have been achieved without regulation.

“Could we have got ESCAS without a ban? I think if we were in a situation today, I think the answer is yes.

“I’m not sure if we reflect on the circumstances of 2011, without industry implementing some of the approaches taken today, I suspect no,” she said.

“I suspect we got what we got because that was the time and the place, the thinking and the attitude at the time.”

Ms Penfold said she knows how far the industry has come in terms of understanding the concept of social licence.

“If we had the knowledge we had today, the government could have probably taken a different decision.”

On the five-year anniversary of the former Federal Labor Government’s ban on live cattle exports to Indonesia, Ms Penfold said the live export industry had since made significant improvements in animal welfare.

“But there is more work to do to satisfy ourselves and our critics as we build a sustainable and profitable industry that continues to contribute to jobs and national economic growth,” she said.

Ms Penfold said that 2011 and the events of the time were a massive wake-up call for all industry participants and will always be a marker of our past and future performance.

“Livestock exporters were put on notice five years ago to fix and improve the treatment, handling and slaughter of exported Australian livestock.

“While the ban was a crude and abrupt approach to implement increased control over the trade in the absence of industry accountability and transparency, the outcome has placed the Australian livestock export trade on a more sustainable and responsible pathway – one that we are not complacent about,” she said.

“Every day since 2011 exporters have worked hard to implement their far reaching responsibilities for animal welfare along the supply chain to the point of slaughter.

“While ESCAS has been the regulatory platform for action, it is the work of exporters, customers and their staff and Australian and locally based animal welfare trainers that has had the most impact.”

Ms Penfold said more than 9000 people have been trained in handling and slaughter practices in 23 markets. Millions of dollars had been spent by exporters and Australia’s overseas customers in new infrastructure and equipment including stunners, restraining boxes, and yards, removal of old unsuitable equipment like Mark 1 boxes, she said. Animal welfare officers and supply chain managers are now in facilities to oversee the day to day wellbeing and welfare of livestock in market.

“Despite this, we acknowledge that over the past five years our implementation of ESCAS has at times been found wanting and where animals have suffered in this process we are truly sorry.

“As individuals and as an industry we are genuinely committed to the care, wellbeing and welfare of all exported livestock at all times and genuinely working to improve what we do and how we do it. There are significant challenges to implementing change on the revolutionary scale of ESCAS particularly where there are cultural and business differences, Ms Penfold said.

“We know our critics want us to do more and move more quickly than has been possible because of the scope of the change required and the nature of it.

“They view our failure to do so as a failure of any genuine commitment to change and improve animal welfare.”

“This is certainly not the case as one of the most fundamental changes that we can report after five years is that getting our animal welfare issues right is increasingly at the core of our business and it’s widely recognised it’s ‘good business’ to get it right.

“Continual improvement in our practices means investing in activities that look to ways of improving animal welfare and supporting regulatory reform – such as supporting changes to modernise the Australian Standards for the Export of Livestock and utilising new more modern vessels to transport livestock,” Ms Penfold said.

“The industry’s research and development program of over 30 projects is critical to us achieving our welfare ambitions with areas of focus on the causes of mortality on board vessels, the development of animal welfare indicators to enable better monitoring and responsiveness to problem welfare areas and the development of a new and improved ESCAS called the Livestock Global Assurance Program.

“As one of Australia’s top ten agricultural exports worth over $1.8 billion to Australia’s GDP, employing over 13,000 people across the country and contributing to global welfare improvement, we are working to balance our obligations to the welfare of livestock in our care and our contribution to rural and regional, indeed national jobs, growth and prosperity.

“We have learned from the past and we are working hard to build a sustainable future.”