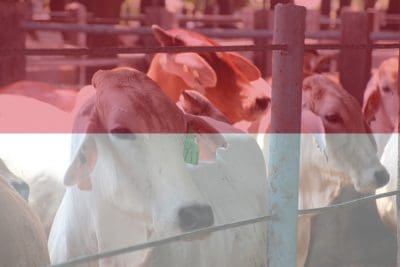 Behind the decrease were cyclically high Australian cattle prices, a stronger Australian dollar, tight supplies of export cattle due to herd rebuilding and in-market challenges in the two big markets of Indonesian and Vietnam – most notably the increased volumes of competing frozen Indian buffalo meat now available in Indonesia.

Breeder exports to Indonesia down year-on-year

The 2017 export stats show declines in volumes to all export markets Australia supplies, with the exception of year-on-year growth recorded in the niche Wagyu export trade to Japan.

The figures also provide an update on the number of breeding cattle exported from Australia to Indonesia last year.

This is significant because 2017 was the first year Indonesia introduced its contentious 1:5 breeder to feeder import policy, the latest in a long-running series of unsuccessful attempts by various Indonesian Government ministers and department heads to force Indonesia to achieve self-sufficiency in beef production.

The policy requires importers to commit to buying and importing one breeding animal for every five feeder cattle they inport between January 2017 and December 2018.

Indonesian importers will be audited on their total import numbers for the two year period on December 31 this year to see if they have imported the correct ratio of breeding cattle to feeding cattle during that time.

Indonesia’s Minister of Agriculture recently issued a statement saying the penalty for importers who do not comply will be the suspension of their import license for one year.

Most importers will not be able to comply with the policy – or at least will not be able to without financially breaking their operations. The policy requires them to buy and then feed thousands of expensive breeding heifers from which they cannot hope to generate a return until those heifers breed and produce saleable progeny at least two to three years away. Many smaller importers do not have the capital or infrastucture needed to fully comply with the obligations of the policy.

2017 trade export statistics confirm that most importers have not come close to complying with the policy at this point.

Most importers are clearly hoping the Indonesian Government will understand that enforcing this policy to the letter of the law at the end of the year would force many importers out of business and put at risk Indonesia’s beef supplies and food security next year.

Indonesia imported 498,000 feeder cattle from Australia in 2017, highlighting how important Australian cattle imports remain to beef supply in Indonesia, even with the introduction of Indian Buffalo Meat.

Suspending the licenses of most Indonesian importers would potentially risk that important supply of beef for Indonesian consumers and cause further rises in the price of beef for consumers.

Stability of food prices is always an important political issue in Indonesia, and 2018 is a big political year, with regional Government elections being held, as well as the lead up to the country’s next presidential elections in April 2019 presidential elections. There are major social, economics and political implications if widescale license suspensions lead to a shortfall of beef and even higher beef prices in the country.  Importers are making efforts to educate and share with the related government officials and departments the impact the policy would have on feedlot businesses and the supply of beef they provide.

Some of the larger importers may be able to comply with the breeder import policy by the December 31 deadline. If they do and if the Indonesian Government enforces license suspensions for the many that will not be able to comply, those that do will potentially have the entire import cattle trade to themselves.

It is impossible to tell if the Indonesia will follow through with the policy. But at this stage it appears it is sticking to its guns, with the director general of Agriculture releasing a statement on January 10 saying the audit will be conducted on December 31 and licenses for those who don’t comply will be lost for one year.

Technically there is still the rest of this year for importers to catch up on their outstanding obligations under the policy by December 31, 2018, but that would obviously require a massive financial outlay beyond the capacity of most businesses.

Export stats show 498,000 feeder cattle were exported from Australia to Indonesia in 2017.

To comply with their obligations under the 1:5 policy, Indonesian importers should collectively have imported 99,600 breeding cattle in 2017.

In total Indonesian importers would have to import some 180,000 breeding heifers between now and December for all importers to comply with the policy.

Even if all importers had the ability to pay for these cattle in one year, it’s unlikely the supply of suitable breeding heifers would be available in the volumes required, given the current focus on herd rebuilding in northern Australia.

For now, as ever, all the trade can do is import breeding stock as they can afford to, and wait and see what the Indonesian Government does next.

“Only time will tell,” one importer told Beef Central. “Fingers crossed and working towards a win-win situation here while waiting for Australian cattle prices and herd recovery to bring relieve to the trade.”