Wellard Ltd has reported a net loss after tax of $2.1 million for the six months to 31 December 2019. 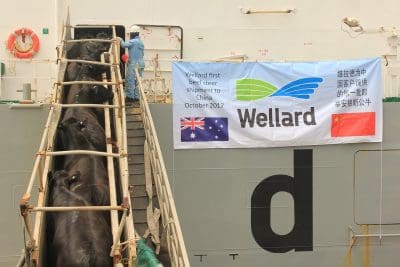 In a statement to the ASX, Wellard has reported that revenue declined from $188.2m to $49.1m during the period reflecting its shift from livestock exporting to focusing on chartering its livestock ships.

Wellard said it gross profit margin increased by 90.1 percent with the transition from exporter/trader to charter business.

EBITDA fell by 53 percent to $10.8 million, however, operating profit margin increased from 12.2pc a year earlier to 22, indicating that a greater portion of revenue is now translating into operating income, the company said.

Wellard’s ‘Cost out’ program delivered savings of $6.8 million with operational expenses reduced to $4.1 million, which compares to $10.4 million in the previous corresponding period.

Administration expenses reduced to $3.4 million from $3.9 million, largely due to savings on labour expenses.

Wellard Executive Chairman John Klepec said Wellard’s EBITDA of $10.8m was a significant improvement on the negative EBITDA of $11.0m for 2H FY19 and was due to improved utilisation of its largest vessels, though the MV Ocean Shearer did not complete a voyage in July or August, which weighed on the Company’s results.

“Importantly, the back to back chartering of all of Wellard’s vessels throughout Q2 looks likely to continue in Q3, albeit with the MV Ocean Swagman undertaking its periodical dry dock for about six weeks, providing the Company with a good operational and financial start to the second half of the financial year,” Mr Klepec said.

“The US$53.0m sale of the MV Ocean Shearer, scheduled to close before the end of March 2020, will complete our balance sheet restructure and, combined with the earlier sale of the MV Ocean Swagman, will see our monthly interest payments reduce from US$0.5m in July 2019 to an expected US$0.1m from April 2020.”

“This will provide an improved translation of earnings to profit in the future.”

Wellard continued with asset sales in H1 FY20 as part of its balance sheet repair task, finalising the sale and leaseback of the MV Ocean Swagman and negotiating the March 2020 sale of the MV Ocean Shearer for US$53.0 million.

At 31 December 2019 total ship debt represented 57.9pc of the book value of the Group’s shipping assets.

Contributing to the change in net debt, a total of $15.4 million (or US$10.8 million) of notes were redeemed in cash during the first six months of FY20.

An additional $0.6 million (or US$0.4 million) of notes were also redeemed at the date of this announcement.

The residual amount of US$4.3 million will be repaid to the noteholders in the next two months with the last instalment due by the end of April 2020.

The funds to be received from the sale of the MV Ocean Shearer would enable the discharge and retirement of the vessel finance debt owed to Intesa Sanpaolo bank (“Intesa”).

Following the full payout of the Company’s noteholders and Intesa, Wellard said it anticipates being in full compliance with the covenants on all remaining financing arrangements.

As with previous reporting periods the ongoing breach of covenants with the above financiers at 31 December 2019 resulted in the reclassification of $14.6 million of debt from non-current to current.

“It is important to note that the Group made all payments due under its working capital facility and ship financing facilities during the reporting period, and reached a standstill and revised repayment agreement with noteholders which has been fully complied with,” the Wellard statement said.

“Despite the breach of financial covenants, the Group continues to maintain a good working relationship with all financiers”.

Wellard says the current outlook for Q3 FY2020 is very good with all available tonnage chartered, in comparison with the poor ship utilisation rates in Q3 of the previous two years.

There was less clarity with respect to Q4 FY2020.

“Although recent rains across the top end of Australia are certainly welcome, and will assist in the long term with greater numbers of cattle being bred and therefore sold, any further increases in cattle prices for our exporter customers will place considerable pressure on exporter margins and therefore their ability to win new orders and charter vessels to Indonesia and Vietnam,” the company said.

“If Turkey starts to release more import permits as expected in the quarter, the MV Ocean Drover could be deployed to that trade.”

Wellard also hit out at a November 2019 decision by then Agriculture Minister Bridget McKenzie to grant exemptions to double-tiered vessels from improved livestock vessel regulations as  “a retrograde step”.

“Should such exemptions continue to be granted, the improved demand for the MV Ocean Drover from sheep exporters to the Middle East that was previously expected will be unlikely to occur in the short term.”

Wellard said Chinese demand for dairy and breeding cattle remains strong and the company will continue to charter its vessels to service that market.

“Although the Novel Coronavirus (now renamed COVID19) is beginning to have a significant impact on international trade, and in particular the movement of goods and people into and out of China, there has been no impact on bookings of Wellard vessels to date.

“The situation does however, remain fluid, and Wellard is unable to predict the full impact, if any, on its business, or the business of its charter customers.

“The Company has several customers who have regularly booked Wellard ships that have continued to deliver Australian breeding cattle to various Chinese ports.”