SELECTION for muscling in cattle is a process that can directly lead to increased returns for producers.

Over many years NSW DPI has proven through a selection project that it is possible to increase, or decrease, the level of muscling within a breeding herd based on the visual selection of bulls and of replacement females post-weaning.

At the same time analysis of the markets reported through the National Livestock Reporting Service shows a consistent trend to pay more for cattle that display higher levels of muscling.  This trend is displayed across weight categories, livestock class and fat scores.

Muscling in cattle is described as volume, and a muscle score using a 15-point scale ranging from A+ to E- is used.  Cattle are assessed visually on the depth, length and width. An accurate muscle score takes into account the entire animal and can be applied to cattle of any age or class. It is important to remember that muscle score should be applied to animals without consideration of fatness.

While muscling has been highlighted as a relatively easy trait to select for, as well as one that has a positive impact on profitability of herds, there are many producers who are yet to incorporate the trait into their selection decisions.

There is a clear financial reward for cattle with increased muscling. Looking at some recent NLRS reports, the difference for same weight and fat steers across the muscle scores is dramatic. The example below from Wagga sales between August 2019 and July 2020, shows the difference on yearling steers muscle scores C and D was 48.6c/kg, and that isn’t including breed or anything other than muscle. 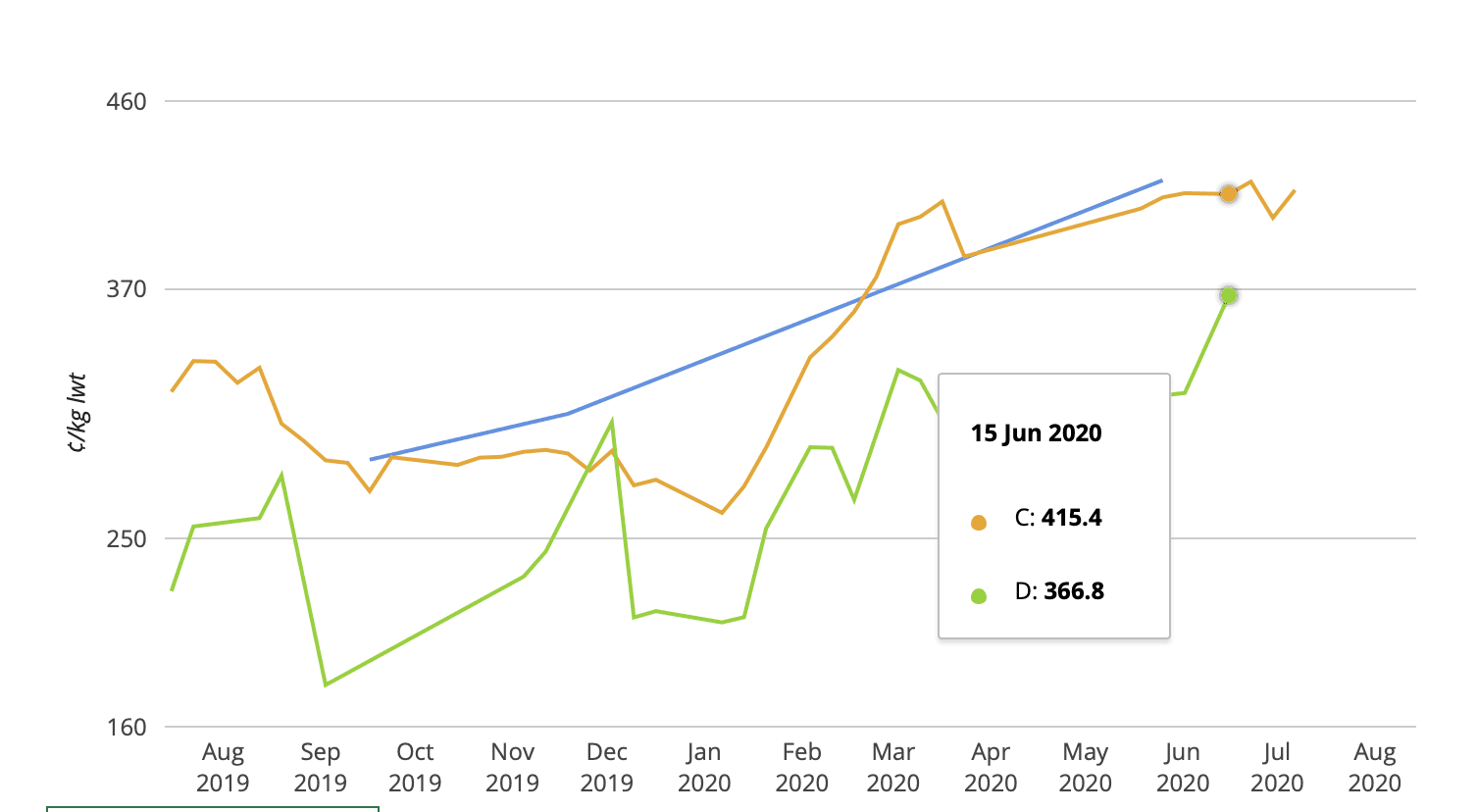 There are many reasons offered for this relatively slow level of adoption. These include the perception that increased muscling may have a negative effect on cow performance traits such as calving rate, calving ease, calf survival, cow milk production, cow longevity and progeny growth rate.

There are also many producers concerned that selecting for muscling will result in reducing the ability to finish progeny to meet fatness specifications or to reduce compliance with MSA eating standards.

The NSW DPI research was conducted over 20 years in various locations across the state, including Glen Innes, Grafton, Trangie and Menangle.  As a research project it was one of the longer-standing projects, which has allowed many of these perceptions to be addressed and dismissed. Two divergent lines were involved – a high muscle group which was joined to high muscled bulls and a low muscle line which was joined to low muscled bulls.

All bulls within the project were purchased from seedstock breeders in NSW at auction, with selection based on muscle score, structural soundness and temperament as key selection traits.  The project assessed maternal performance as well as performance of steers through to slaughter.

The implications of the trial demonstrated that fears held by many producers of the risk of selecting for increased muscling are generally unfounded. There was no difference between Low and High muscled heifers in calving ease or any of the other female productivity traits measured. 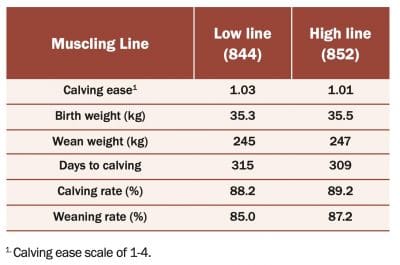 Source:  CRC for Beef Genetic Technologies Reproductive performance of cows selected for High or Low muscling, giving birth to their second or subsequent calf from 1998 to 2009

In general, the cows in both groups were similar in weight, however the higher-muscled cows were slightly smaller in frame score and had less subcutaneous fat than cows in the low muscling line.  Regardless of these slight differences, there was no real difference between either line in calving ease, gestation length, birth or weaning rates. And importantly there was no real difference in weaning weight between high and low muscled calves.

Some producers have expressed concern that selection for muscling will eventually result in a cow herd that are all double-muscled. Double muscling is the result of a genetic syndrome caused by a mutation of the myostatin gene. While a double muscled line was identified in the NSW DPI work, this line was kept separate to the High and Low groups that were the key focus of study.

What became obvious after a number of years was that the divergence in muscling between high and low muscle groups became more stable. In effect muscle was increased to around a muscle score B and remained there for the high group. Any increases would have required the use of specific extreme muscling genes or crossing with extremely muscled breeds.

This demonstrated that selection using muscle score was an effective and viable method to increase muscle within a breeding herd and that this practice wouldn’t result in creating a herd of double-muscled females.

In terms of growth and feedlot performance, there were no significant differences between the steers from either high or low muscle lines. Growth rate, feed intake and MSA grades were similar across the project. A closer analysis of data collected over 11 years of the project was used with Breedplan analysis to identify some useful messages for producers.

These messages include visual selection for high muscling was associated with:

The analysis demonstrated that there was no apparent relationship between visual selection for muscularity and weight EBVs. In effect this proves that that growth and muscling are independent traits and need to be considered that way as part of any selection process.

Given this long standing process of selection for muscling and the direct financial reward that is on offer across the country, it is probably time producers had another look at their selection decisions on both future bulls and replacement females.

The simple message for producers is to look for those animals that meet their requirements for genetic improvement within the herd, and from this group select the more muscled cattle as the basis of long-term improvement on a financially rewarding trait.