AS THE Australian beef industry starts to rebuild numbers following years of significant drought, the role of heifer management on successful rebuilding is more crucial than ever.

The rebuild will depend on the retention of more heifers in breeding herds, as well as maintaining a solid cow base and striving for high levels of both conception and weaning rates.  Retaining and joining more heifers in 2020 was a clearly-signaled intention in the approach many producers took in purchasing bulls.

Looking back on the 2020 sales, the competition for bulls with high accuracies around low birth weight and high calving ease, drove individual prices and sale averages to new levels. Although the high prices and clearances of 2020 were not solely due to the need to improve these traits, many seedstock breeders commented on the demand for bulls to join to heifers as their clients looked to rebuild.

Now that many of those heifers have been successfully joined in 2020, it is important to focus on the critical area of management of this female group. Of all the classes within a breeding herd, the first-calf heifer is the one that requires the most attention and is often the most problematic for producers striving to maintain fertility levels in their herds.

Professor Wayne Pitchford of Adelaide University highlighted this theme in his presentation as part of MLA’s MeatUp event I attended in South Australia last week.  His presentation focused on the impact heifer conception, and second-calf conception has on both the overall profitability of southern enterprises, and on the availability of producers to select suitable replacement females to make genetic progress within a herd.

In the first instance, the pregnancy rate of heifers using current prices was presented. Prof Pitchford noted that the value of pregnant females is not only in their potential for use within herd as replacements.  There is also clear value on surplus PTIC heifers as commercial producers seek to acquire females for their own rebuilding phase. 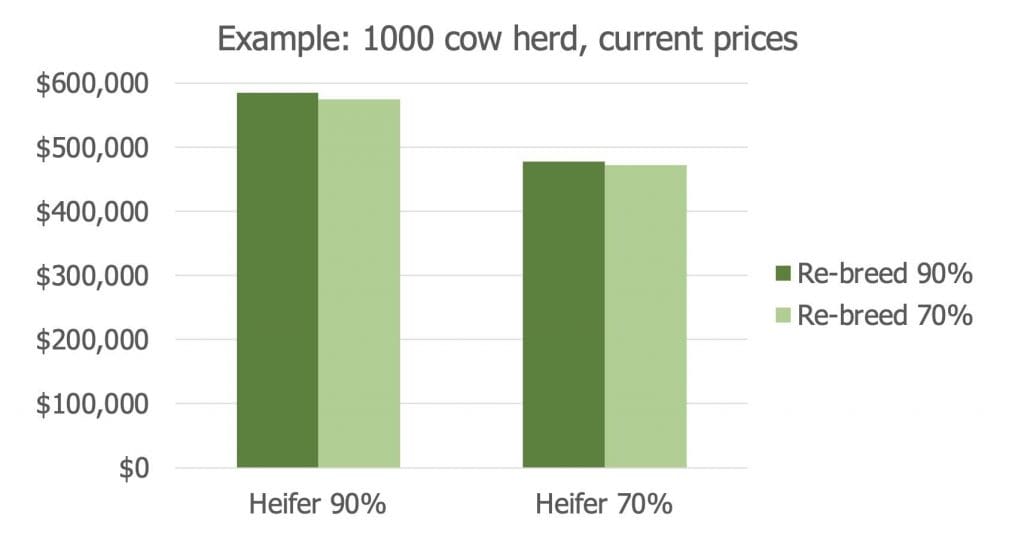 Using current market values, this chart demonstrates the difference in Earnings Before Interest & Tax (EBIT) from herds with high pregnancy rates for both the initial calf and the second calf.

The important point to note is not only the significant loss of income from low rates (70pc), but to consider the impact of a 70pc conception rate on the initial joining and a 70pc rate for the first calf heifers.  In that situation, the calving rate over the two joinings averages at 49pc.  In any language this is a low number for southern programs seeking to rebuild and reliant on using younger females to manage the process.

The challenge with successful rebuilding relies on both nutrition and fatness. While genetics is essential in the longer-term approach of adjusting fatness traits within the herd, in the short term, producers will have to focus on how they manage Body Condition Score and nutrition to maximise their rejoining success.

Prof Pitchford used data to highlight that this is a more critical set of considerations for first-calf heifers than it is for mature cows.  Beef CRC research highlights the impact that low Body Condition Score, combined with lower levels of nutrition has on heifer pregnancy rates.

This impact is more pronounced than it is with mature cows – which is not to suggest that body condition and nutrition can be neglected in the older group. Rather, that more attention and management be directed to the first calf group.

The importance of body condition and weight for a successful first conception, as well as maintaining a heifer through lactation and into a successful second joining should not be overlooked.  While many heifers have been joined, producers should now be thinking about how to best manage and maintain the heifer to avoid significant condition or weight loss through lactation.

Data collected on heifers joined over six weeks highlights the impact rejoining weight and fatness has on pregnancy rates. 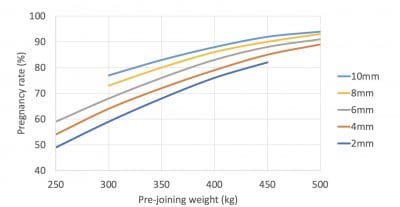 While this data focusses on successful conceptions for heifers, maintaining nutrition and BCS through lactation and into the second joining is fundamental to a successful rebreeding rate.  Low pregnancy rates among first-calf heifers, combined with lighter and leaner heifers being rejoined will result in a disappointing result and a slow down for producers anxious to rebuild.