FOR many producers, the development of breed indexes was a significant step forward in the provision of genetic information.

As the number of EBVs increased with developments in performance recording, combined with new ways to capture genetic information, the complexity of making a purchase decision on a bull also became more challenging.

Breed Indexes offered an effective approach to considering the impact of genetic potential a bull possessed to influence the profitability of his progeny across the industry production chain. For many, this allowed a more focussed decision on bulls without having to individually assess each trait and attempt to consider how that would impact finishing traits of steers, or fertility traits in replacement heifers.

Although the Index was a strong guide, it allowed the opportunity for producers to create a short-list of potential bulls that could then be individually selected if required, based on personal preferences on specific genetic traits.

The development of Breed Indexes comes through world leading technology developed in Australia by AGBU – the Australian Genetics Breeding Unit based in Armidale. BreedObject continues to refine and account for new genetic technologies and data, and with the release of Version 6, this has opened the possibility for breeds to reconsider the driving focus behind their breed indexes.

The first of the breed societies to reassess their indexes has been Herefords Australia. 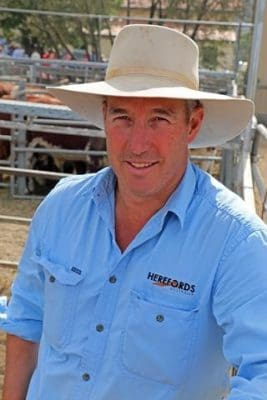 Andrew Donoghue, the general manager of the Society, explained that the opportunity to provide Indexes that focussed on the production systems that Herefords were used within was an exciting outcome of the new BreedObject software.

“We have been looking and talking with our members and across industry about where we as a breed want to head. Logically we know that the expectations for Herefords in Northern systems are very different to those in southern regions,” Mr Donoghue said.

“In the past the focus of the indexes was on finishing systems.  However when we talk about finishing systems, the outcome is more about compliance with a specification –effectively, hitting requirements for fatness, carcase weight and marbling.”

“So while some people choose to use grass finishing as their focus and others grain finishing, we are still effectively heading in the same direction.”

As Mr Donoghue explained, the significant difference between production systems in the north and the south revolves largely around the cost of feed during annual feed gaps.

“The cost of feed in those periods is significant depending where the cattle are located,” he said, “and this has a major impact on a production system’s profitability.”

“Choosing bulls that can have a genetic influence on a herd’s feed efficiency, as well as growth and mature weights will help producers adjust their programs to better meet their environmental constraints in a profitable way,” he said. 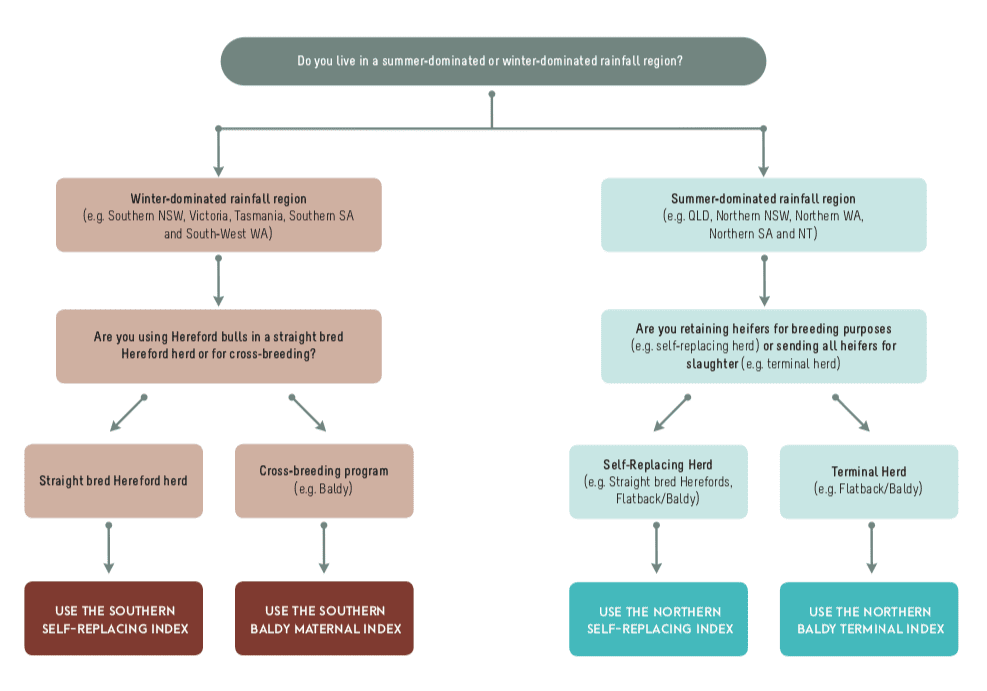 Move away from finishing systems

For producers, the change in Indexes will be to step away from looking at a finishing system, and ranking bulls according to their value.

Instead, the first step will be to consider their location as either a southern or northern producer. From there, the progression is to select a production system that reflects their operation, before then choosing the most suitable bulls for that program.

The Hereford Indexes to be released this month have all been developed with a focus on maintaining and improving eating quality outcomes. Within the model that creates the ranking, premiums to reflect marbling were included, as well as placing pressure on early growth in order to maintain low levels of ossification.

Once producers have chosen their location and production system, there are four indexes that can be considered. For those in southern production regions these will be:

Andrew Donoghue highlighted the major difference between the Northern and Southern Self-Replacing Index as being a significant difference in feed cost.

While the Index still targets the production of cattle for the domestic market, he said it was envisaged that producers would use this in either straightbred Hereford herds or where Hereford bulls are going into crossbred herds, say over a Bos indicus composite based cow herd.

“Finishing weights are slightly higher in the northern systems and the indexes also pick this up in the calculations,” he said.

In discussing the new Indexes, Mr Donoghue highlighted the attention focussed on creating a system that more realistically reflects production, and environmental pressures experienced by breeders across the country.

“We have really spent a lot of time consulting with our members and across industry ensuring that the new indexes align with the key production and market systems for Hereford cattle,” he said.