Aimed at offering commercial breeders advice on capitalising on the genetic and financial opportunities yearling bulls offer, the use of yearling bulls was described at the time as a ‘growing trend.’

While the use of yearling bulls has been widely practiced across many parts of Australia, it is hard to argue that the number of yearling bulls sold to commercial producers is a dominant number in the sale results.

And while there are often yearling bulls on offer to producers as part of auction listings or for private paddock sales, producers may often overlook these bulls as sires for their programs.

As the 2021 bull selling season gathers pace, it is perhaps an opportune time for producers to re-evaluate the potential of yearling bulls for commercial and seedstock programs.

Tom & Olivia Lawson of Paringa Livestock near Yea, Victoria sees the role of yearling bulls as one that offers exciting possibilities for producers.

“It is exciting when you consider a few things,” Mr Lawson said.

“Firstly, there is obviously the additional longevity that yearling bulls have,” he said.

“Extending working life is so important with the level of breakdown as bulls get older.  However, for us, the value of faster genetic gain is so tremendous.”

I think about the fact that while there are two-year-old bulls being sold this year, already there are calves on the ground from the yearling bulls we have sold to clients last year

“I think about the fact that while there are two-year-old bulls being sold this year, already there are calves on the ground from the yearling bulls we have sold to clients last year.” Tom and Olivia Lawson at Paringa, near Yea

For many breeders, faster genetic gain is often overlooked, or its potential to increase productivity within a program is less well understood.

In simplest terms, genetic gain is best described as the expected or actual change in average breeding value of a population over at least one cycle of selection for a particular trait or index of traits.

In practical terms, using younger animals within a program increases the cycle of selection and allows producers to make decisions on the suitability of animals for a program earlier.

Tom Lawson commented that “we have clients who have made amazing changes and improvements in a 10-year time period, by using yearling bulls. Their programs are smoking along now,” he said.

The value of genetic gain across the industry can, and is often measured. Data released by Angus Australia at the end of the 2020 bull selling season highlighted the general value of that increase in genetic merit between 2016 and 2020.

This showed that across all bulls offered by the breed in 2020, there was an increase of $14 per female mated. This in turn, represented an average improvement in the genetic merit of Angus bulls of $3.44 per female mated per year across the previous five years of analysis. 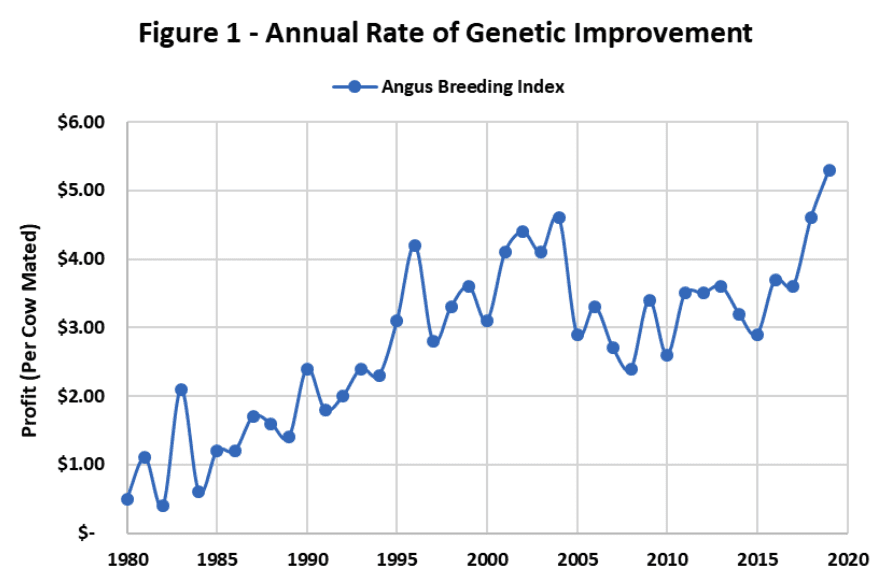 As highlighted by Tom Lawson, producers “who are focussed on their breeding objectives can really benefit from the rate of genetic change that yearling bulls add to their program.”

Producers keen to increase their rate of genetic improvement have in the past been dissuaded from buying yearling bulls due to limited availability of genetic potential, particularly with EBVs that had no data or low accuracies.

However, the inclusion of genomic testing in breeds including Angus, Hereford, Brahman and Santa Gertrudis, this is a factor that has changed dramatically.

Many yearling bulls that are well-linked with the broader reference population are now offered for sale with EBVs and in many cases, Index values.

The solidity of the data to make more informed decisions, along with the increasing rate of gain should certainly be considered as producers seek to find the next team of sires for the 2021 joining season.

Erica Halliday of Ben Nevis Angus has long advocated the use of yearling bulls for breeding programs.

“We’ve been selling yearling bulls for over 20 years, and often producers do underestimate the value that yearlings can offer over the enterprise,” she said.

Ms Halliday described the role of genomic testing as “a massive step forward.”

“It has really been revolutionary for us. We can now provide EBVs with accuracy on these yearling bulls and offer our clients that opportunity to make more informed decisions on bulls.”

Equally important is the opportunity to acquire bulls that can become acclimatised to a new environment.

The period of adjustment can often be significant on older bulls. Although many producers do take care with the introduction of new sires to their property, it is often difficult for bulls to adjust.

Changes in feed types, unfamiliarity with the location, temperature changes as well as the stress of finding a place on the social hierarchy often lead to bulls losing weight and condition in the critical lead up to joining.

For older bulls, unless this is carefully managed, the impact of these factors combined can reflect in semen quality and general libido levels.

Much of the advice around yearling bulls focuses on the potential of the younger, fitter bulls to start work.

However, an additional benefit highlighted by Erica Halliday is the differences in behaviour between yearling and older bulls that have gone to clients’ programs.

“We find these younger bulls have really just gone to work. They don’t seem to learn to fight with each other, so they are easier to manage and seem less sexually-frustrated and less inclined to bully each other instead of working. Clients seem to find this behaviour very different and a real benefit in management over their mating groups,” she said.

For producers who this year are seeking to acquire genetics to move their program forward within a budget that is manageable, the yearling bull offers greater opportunities than many would appreciate.

Perhaps one of the most important suggestions to remember when looking at yearlings is to remember that size is not always the best indicator of future performance.

The EBVs are critical to ensure that traits such as Calving Ease, Birth Weight and Mature Cow size stay within the overall parameters of the breeding objectives.