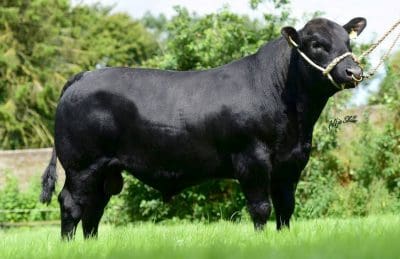 US Angus bull carrying one copy of the double-muscle gene. Source: Progressive Genetics

Selection for increased muscling in beef herds is a topic that always generates some discussion, particularly around fertility and calving difficulty. Last week’s article on selection for muscling created several conversations online and elsewhere as producers responded to their own experiences of muscling in herds.

Perhaps one of the areas of concern for many producers, is when does muscling actually start to create issues for a herd? As the NSW DPI research discussed last week provided, heavily focussed selection for muscling using Muscle Scores does eventually see a herd level at around a Muscle Score C.  However, many producers have questioned the impact of double-muscling and how this trait should be considered in their herds.

Double muscling is a genetic syndrome and is caused by the mutation of the myostatin gene.  The result of this mutation is that it causes the negative regulator of muscle growth to fail to function. This failure allows muscle to be expressed in an extreme manner. As a genetic syndrome, double muscling has been studied for several decades, and this research has shown there are at least five different variations of the myostatin mutation which result in double muscled cattle.

No doubt many producers are aware that European breeds, particularly Belgian Blue and Piedmontese frequently display double muscling.  However double muscling can be expressed in many breeds, including British Breeds such as Angus and South Devon.

Much of the research conducted into double muscling has looked at the impact of double muscling on fertility traits such as calving ease. The research highlights the increased risk of calving difficulty when animals have two copies of the mutated myostatin gene.

The review summarised these projects with some useful messages to consider. In general, double muscled animals (those with two copies of the mutated myostatin gene) have higher levels of calving dystocia when compared to animals of the same breed which had only one copy of the gene or no copies.

It appears that animals with only one copy of the gene are not significantly more at risk of difficult calvings, when compared to normal animals.

Part of the challenge of double muscled cattle at calving appears to be a result of their physical conformation as a result of their extreme muscularity.  Double muscled cattle tend to have a modified growth pattern where in some studies it was found that these had a higher birth weight, but a lower mature weight when compared to animals in the breed that did not carry two copies of the gene.

Part of the ABRI review highlighted some useful research which showed double muscled animals have a smaller skeleton, greater angularity of the hip bone and a narrower pelvic opening. While this alone would cause concern for many producers, a double muscled calf tends to have heavier birth weights and greater width of thighs and hip bones. The combination of these traits dramatically reduces calving ease in double muscled cattle.

As a genetic condition it is possible to test for the presence of the myostatin gene. As a genetic trait, many breed societies offer the opportunity for producers and breeders to test for the condition within their herd. The value of this is to empower producers to make more strategic choices when selecting bulls to avoid increasing the risk of animals possessing two copies of the gene, as a result of mating a carrier bull with a carrier cow.

It’s important to remember that having cattle in the breeding herd that may possess one copy of the gene (a carrier) doesn’t mean that these issues may be completely detrimental for the herd. The research conducted across many studies highlighted the impact heterozygous (carrier animals) had increased rib eye area, increased retail meat yield and lower levels of subcutaneous fatness.

Within the NSW DPI muscling research, a line of cattle with one copy of the myostatin gene was identified, and their performance was compared against the cattle selected for high muscle and low muscle scores. The key findings from this work showed that steers with one copy of the myostatin gene had similar growth rates, and improved feed efficiency and meat yield to the high muscle score steers, with no significant differences in meat quality.

Within the cow herd, the cows with one copy of the myostatin gene had the same calving rates and maternal performance as High cows on moderate to good nutrition.  However, as nutrition become restricted, their performance appeared to be reduced after 18 months.

In practical terms, there are a few factors producers should consider, particularly if there is a desire to increase muscling across their herd. The key issues are that double muscling as a condition is possibly less desirable to have within a commercially focussed herd. The increased risk of calving difficulty outweighs the potential financial rewards associated with increased muscling.

It is more practical to select cattle for heavy muscle and avoid using animals that possess two copies of the gene.

For producers who may have carrier animals within their herd, this is a manageable phase.  However, it does require more care to be taken in selecting bulls in order to avoid using a carrier animal.

Bull breeders should consider gene testing in order to provide their clients with as much information as possible to assist in making these decisions for their herd.

Finally, the NSW DPI research highlighted the concerns that maintaining a herd of myostatin cows can have in times if nutritional stress. These cows appeared to be less productive when compared to cows selected for their visual muscle score over the research project.

It may be worth considering if myostatin animals as the basis for a herd are suitable for more challenging nutritional environments.