WITH the final stages of the 2021 bull selling season now in sight, reflections and discussions on the year that has been are commencing among many bull breeders and industry observers.

Much of the attention has fallen on the spectacular prices and clearance rates for sales across the country. While this is easily the most common theme of conversation, there are also some interesting discussions emerging as producers and breeders move to dig deeper into the seedstock trends of 2021.

One of these  focusses on the uptake and application of Estimated Breeding Values within various breeds. While this may not necessarily be a new topic, what has been interesting is the feeling among some seedstock breeders that producer understanding of EBVs and what they mean for progress for a breed is actually lower than may be appreciated in the broader industry.

In a recent conversation with a prominent bull breeder (who asked not to be identified) the subject of both the accuracy of EBVs and producer expectations for EBVs came to the fore.

This is a point that has been recognised for several years. Catriona Millen and Boyd Gudex of Southern Breeding Technology Services presented the John Vercoe Memorial Lecture to the 2017 AAAGB conference. Within their paper they noted that “While the BreedPlan analysis needs data to analyse, breeders see limited value in recording a trait for which they don’t receive an EBV.”

It is important to note that EBVs are dependent on producers being willing to record performance data. For breeds seeking to attract the attention of commercial cattlemen and women, or for breeders to stand out within a breed, this individual participation is critical.

There are several reasons why bull breeders may not be actively recording production data and submitting this on for analysis and inclusion in EBVs.

An MLA review published in 2017 suggested some potential causes of resistance to recording and submitting data for BreedPlan or EBVs.

These included many producers, both seedstock and commercial, who do not believe the system works. This could be due to poor experiences with BreedPlan and more commonly due to a lack of understanding of how the system works.

Other factors included an acceptance that BreedPlan can identify genetics differences in animals, but that most of the genetic gain comes from environmental influence.

One interesting factor was identified among producers who are “concerned that bulls from bloodlines that are currently attracting a premium in markets will be assigned EBVs that do not justify that premium, thus devaluing their stock.”

For a few breeds seeking to grow populations and build market acceptance, the impact of both a lack of understanding on how EBVs are developed, combined with producers’ desire to protect their investment in the reputation of sires, that poses the biggest impediment to improved recording and accuracy of EBVs across the suit of production traits.

A comment by one NSW bull breeder who also declined to be named summarised the issue some breeds now face.

“While ever we have lazy breeders who don’t record and won’t submit raw data to BreedPlan, yet are quick to run the system down, it will be difficult to encourage increased uptake of BreedPlan – which I believe is critical to the breed’s future success.”

Fundamentally, one of the challenges to changing attitudes lies within increased producer understanding of objective measurement and genetic improvement generally.

The 2017 MLA report identified the sources of advice for both seedstock and commercial producers. Among seedstock producers (Fig 1) informal networks among fellow producers was the most highly-used source of information. 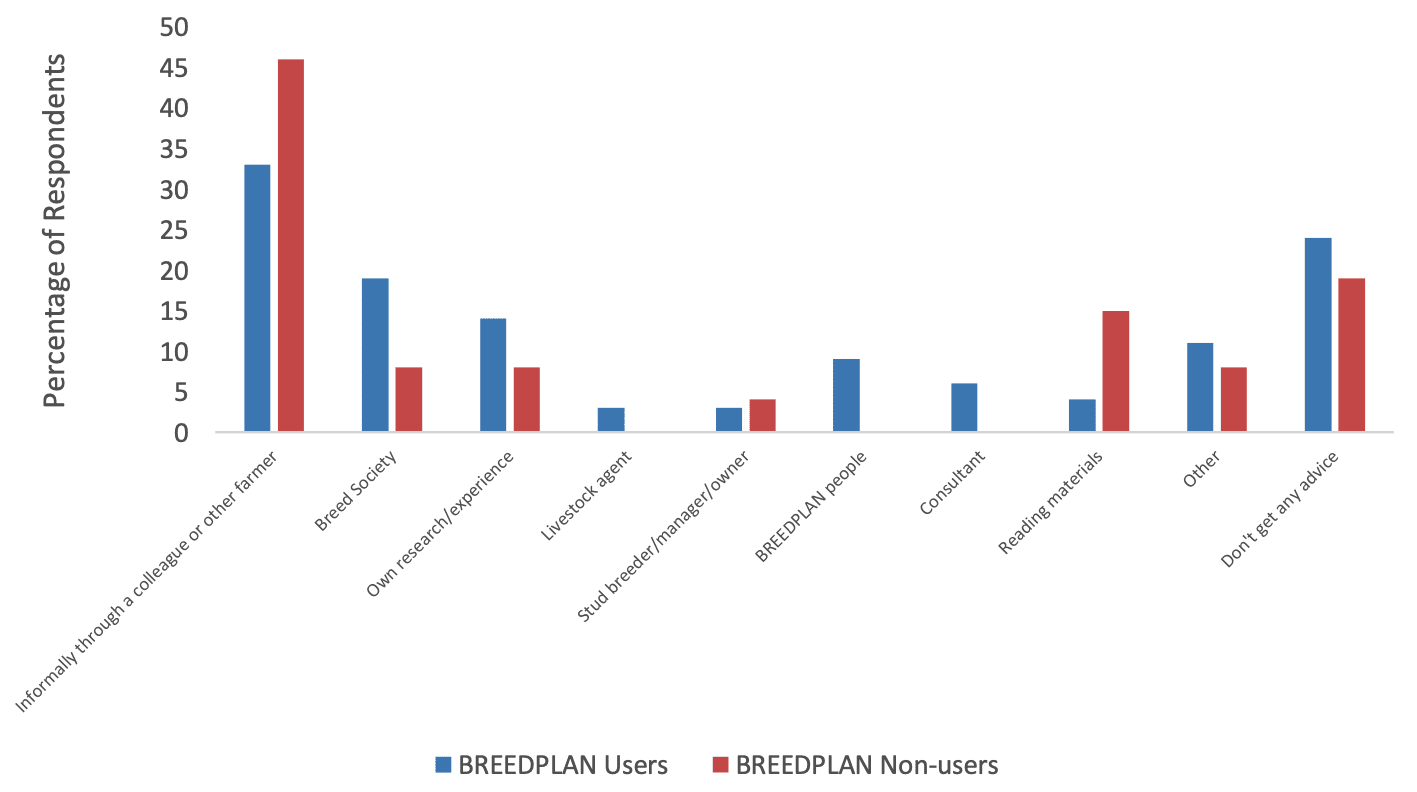 Figure 1 – Most common source of Advice on Genetics – Seedstock Producers

This compares to sources of genetic advice used by commercial cattle producers (Figure 2) highlighting that seedstock producers, other producers and agents are the most common sources of advice. Significantly, among non-Breedplan users (red column), the single largest response was ‘Don’t get any advice.’ 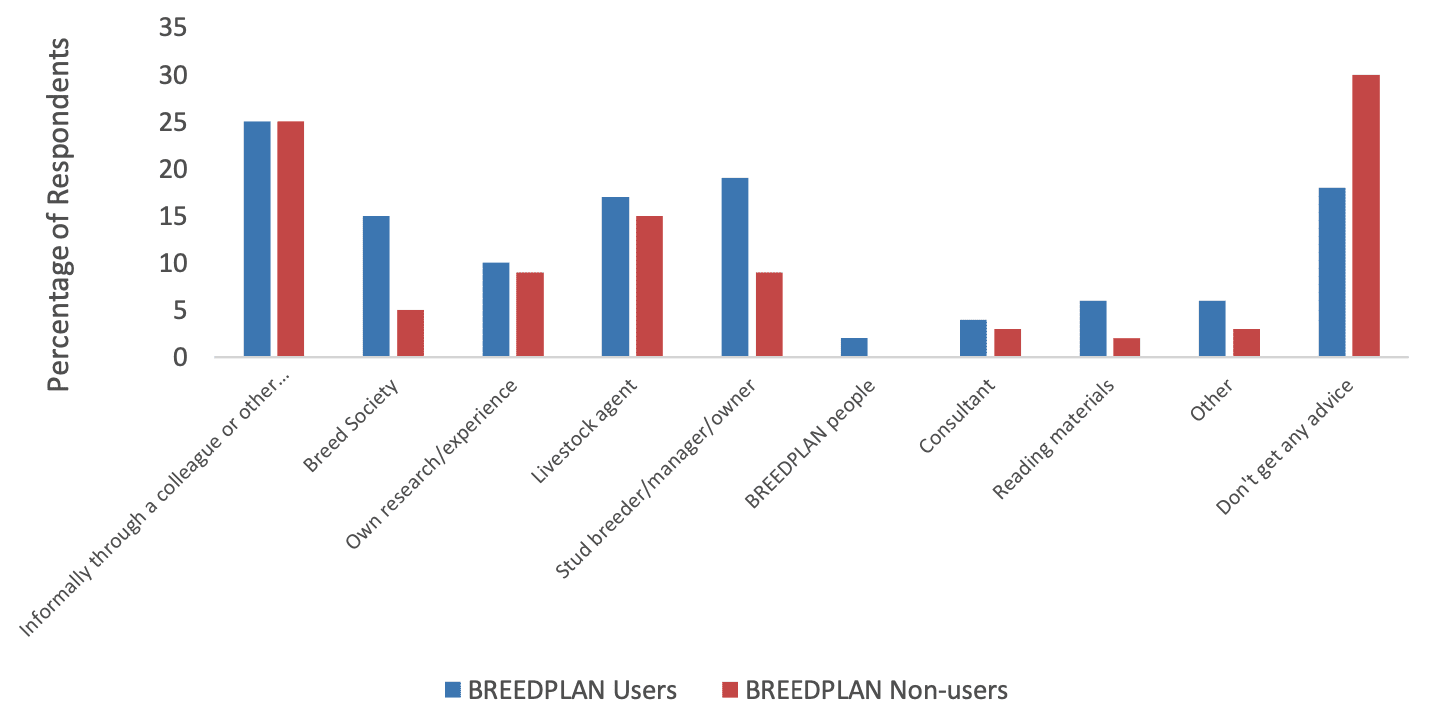 For breeders and breed societies who are focussed on making improvements to the accuracy and range of EBVs on offer, there are some clear messages from this data.

The first is the need to focus on improving understanding of EBVs and how they are developed. This will go a long way to helping explain not just the “how to record data” but also “why data needs to be recorded.”

In developing an understanding of why data should be recorded and submitted, the focus can then aim at increasing the accuracy and overall usefulness of EBVs to producers making selection decisions.

It is important that breed societies take an active role in increasing the awareness of why data should be recorded and help their members and potential clients find the cattle they want to use in breeding programs over the coming decade.

Without this focal point, it’s likely producers’ expectations about BreedPlan – particularly for accuracy and relevance – will be unmet in many situations.

Without the constant submission of data, not only will accuracies suffer, but some breeds and breeders will slip from the attention span of commercial breeders who possess clear breeding objectives and are seeking genetics that will offer them actual production gains.