HERD fertility in beef cattle is the result of a combination of on-farm factors, combined with the genetic characteristics of individual breeding females.

Successfully manipulating these factors to achieve high levels of fertility does require a degree of focus and attention by producers.

As described in last week’s genetics review (click here to access), genetics within a herd will impact on fertility levels. Producers seeking to change their genetic profile, selecting for higher levels of fertility, can use the Days to Calving EBV.

However consideration of the EBV is only one part of the selection process. Other genetic factors including mature cow size, fatness and other fertility traits such as birth weight and calving ease also need to be included as part of a potential sires evaluation.

Across the country there are varying levels of focus placed on the Days to Calving EBV. In general, southern-based herds with closer management of cattle, and more defined joining and calving periods, place lower emphasis on the trait compared to other fertility measures.

Beef Central spoke with a number of bull breeders across the country to gauge their approach to the Days to Calving trait, and the traits they apply in managing fertility.

Ian Vivers of Eaglehawk Angus at Glen Innes, in NSW descries the trait as useful, but less relevant to his selection decisions than some others.

“We tend to look more closely at Calving Ease and Birth Weight in selection,” he said, with the focus then on “managing cow fertility and culling cows based on pregnancy testing and their ability to rear a calf to weaning.”

Mr Vivers describes the approach in his environment as one that focuses on “on-farm function.” Ian and Sally Vivers and children Annie, Maggie and Harry at Eaglehawk, near Glen Innes

Further to the east at Gloucester in NSW, Ted Laurie of Knowla Livestock describes fertility as a key driver of his herd’s productivity.

While he does consider the Days to Calving EBV, it is generally in combination with other fertility traits. He does feel that as a trait, it tends to be overlooked in many southern herds, where fertility is often more easily managed with nutrition and more direct supervision.

“It’s a very useful trait, however it might also get overlooked when people start using the Indexes more frequently. So while they are genetically lifting their herd, it might not be a primary focus,” Ted said. 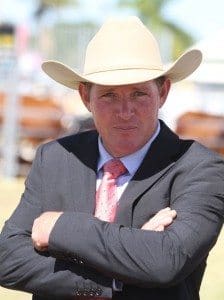 As with Ted Laurie and Ian Vivers, he sees many southern breeders focusing more on direct fertility traits.

“A lot of people look at their fertility levels on-farm with preg-testing and culling non performing cattle. And so they are looking for bulls that can help improve calving ease and birth weights.”

While that may be generally true for southern focused systems, Jason’s more northern and western clients place greater attention on the Days to Calving trait.

“They definitely focus on the trait and look for a more negative number,” he said.

Further north, producers place increasing emphasis on the Days to Calving EBV in their approach to selection.  Brahman breeders Tom and Marie Copley are located at Salty, on the headwaters of the Brisbane river, north east of Toowoomba.

Their selection focus includes moderate growth, structural soundness and quiet temperament.  The Copleys particularly focus on fertility and Days to Calving is a trait that underpins their focus on achieving and maintaining a high level of productivity.

“If you focus on productivity, Days to Calving is a huge contributor to a system and to business profit,” Tom said.  “When you look at the Brahman Index for Jap Ox, you’ll see that Cow Weaning Rate contributes 47pc of the Index.”

The Copelys are very supportive of recording data, and providing their clients with accuracy in order to make better selection decisions.

“Without doubt, management structures have to support the genetic selection. You still have to cull non-pregnant females, use supplement strategically if the environment requires that, as well as weaning early. But there is no doubt some big gains can be made in profitability in our herds with the genetics available,” Tom said.

Santa Gertrudis breeder David Greenup, from Rosevale near Jandowae on Queensland’s Darling Downs, says there is an increasing focus from bull buyers on Days to Calving EBVs.

“Particularly since two-year-old bulls have had Days to Calving EBVs reported, buyers are looking for bulls with this data,” he said. David describes the buyers who are focused on improving their fertility as the ones who are “very conscious of their financials.”

“They know that productivity can be improved with better fertility and that the selection of superior genetics is one way to achieve this. Culling the empties following preg-testing gets rid of the free-loaders, but positive genetic change in a herd, irrespective of nutrition and management practices, can only be made by introducing bulls that will leave behind daughters with higher fertility than their dams,” he said.

“Selecting bulls that have superior Days to Calving EBVs with high accuracies will do this.”

David emphasises the importance of a long-term approach to genetic improvement.

“It’s important to remember that it will take up to 15 years for the total effect of improvement to be felt across a herd. So you can’t expect a herd to change in one or two years. Embedding fertility into a herd is something that can be done, but you have to remain focused,” he said.

Genetics Central editor Alastair Rayner is the Principal of RaynerAg, an agricultural advisory service based in NSW.  He regularly attends bull sales to support client purchases and undertakes pre-sale selections and classifications.  He can be contacted here or through his website www.raynerag.com.au