WITH autumn bull selling season ramping up, it is an opportune time to consider what attributes should be considered to maintain successful autumn calving programs.

Autumn calving is a widespread and common practice in many southern beef herds. It is also common among herds in more central and northern parts of NSW, as producers search for ways to maintain market versatility and even-out cash flow and continuity of supply into brand programs during the year. 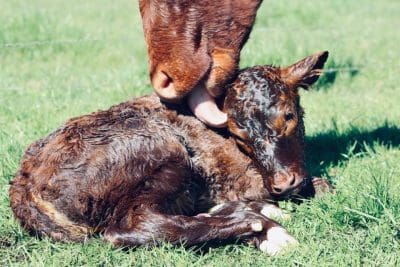 Traditionally, autumn calving herds looked to capitalise on the later summer growth of pastures to maintain cow condition ahead of calving, and to balance cow condition with supplementary feed to bring calves through winter before exploiting the spring growth to bring weaners up to weight for the autumn sales.

While the practice is still a common one across southern regions of Australia, there is an increasing shift towards spring calving for many reasons.

Reg & Rebecca Woddiwiss from Royston Shorthorns near Davenport in Tasmania calve around one third of their herd in autumn. “In general, our autumn-calving cows do a better job on their calves and work harder, in that their calves tend to be a bit older at weaning,” Mr Woddiwiss said.

However, the pressure of maintaining lactating cows through winter is a major consideration.

“Managing autumn-calving cows in our cold winters is tough, which is why we only calve a small portion then. The cows need little to maintain over summer prior to calving, and once they calve there is some green feed, and then we use silage to fill the winter feed gap,” he said.

Maintaining cows through winter is one challenge many autumn-calving herds have faced, however the trend towards change is also a reflection by many people on the seasonal availability of feed at other times of the year.

Ian Locke of Wirruna Herefords describes the move towards spring calving in the south as a longer-term shift.

“There has been a significant shift to spring-calving from autumn-calving in the south over the last two decades. I think producers are better matching their seasonal grass production to the nutritional requirements of the breeding cow throughout the year,” he said.

Mr Locke also suggests that changes in market options has been a major driver for many producers to alter their traditional calving times.

“There are now greater opportunities for feeder steers or for grass finished animals as opposed to reliance only on weaner production systems,” he said.

The economic drivers are also a major trend noted by Marc Greening of Injemira Herefords, who said many of his clients were now looking to “push back autumn calving into the cooler months and bring forward the spring calving programs into winter.”

“Much of these decisions are a result not just from recent seasons, but the due to the advent of the premium grassfed markets. You can see the rewards for grassfed cattle that fit the specifications as early as possible. You can see grass finishers preferring to buy a calf as old as possible in order to achieve a turnoff in July and August. The recent prices highlight a willingness to pay for that article, so I think the trend will continue,” Mr Greening said.

While there are emerging economic advantages for many producers in moving towards a spring-calving program, autumn-calving continues to provide opportunities for focussed operations.

James and Ted Laurie, of Knowla Angus at Gloucester NSW, incorporate an autumn joining into their program to maintain market flexibility and to maximise the use of their better-performing sires.

James Laurie described the systems as giving greater flexibility. “We can use a top sire in the stud and then move him into our commercial herd. It also provides some cash flow advantages with different selling times. Our autumn calves make ideal feeder cattle at 16 months of age, which is perfect for an August feedlot entry and its often then we can capture a premium,” he said.

As an emerging trend, breeders commonly cited the need to focus on their season and feed supply. Calving should ideally correspond with seasonal increases in feed to avoid significant weight loss among cows and to minimise the risk of lower conception rates.

Genetic selection is also a crucial area as producers consider bulls for this season. Traits such as Days to Calving, Positive Fatness and Mature Cow EBVs can be extremely useful to assist in identifying sires which can produce progeny that in the longer-term are more suited towards  herds that choose to maintain autumn calvings.

CRC for Beef Cattle & Meat Quality research conducted at Vasse in Western Australia over three years identified little difference in carcase traits such as yield or marbling between autumn and spring-born calves slaughtered at the same age. The trial did however underpin the importance of using high accuracy EBVs to select sires regardless of calving time.

While autumn calving can offer some flexibility to programs seeking to balance out cash flow, the extra income needs to be compared to the potential costs associated with feeding cattle if there are significant seasonal gaps in the production environment. The attractiveness of grass finished programs or feedlots seeking older cattle needs to be considered against the overall suitability and type of cattle that are being bred.

However, the ongoing development of new markets, combined with increased accuracy of genetic information is more than likely going to see producers make more shifts away from traditional breeding patterns.

So, if the message for commercial producers is to consider options in light of seasonal feed supply and market opportunities, the message for seedstock producers appears to strongly focus on ensuring genetic information is as available and as accurate as possible to support those decisions.

Have we listed your autumn 2020 bull sale details?

Beef Central has launched its 2020 autumn bull sales directory, featuring sales fixtures nationwide across all major beef breeds being held between now and June. Data is being compiled from breed society records and numerous other sources, but it might pay for studmasters and sale administrators to check our current directory page to make sure their sale is included, and accurately described. Note that the spring 2020 sales directory will be compiled from mid-year. If details for your autumn 2020 sale do not show up using the page’s search function (click here to access) please use this advice panel to send us information to update our records and add to the directory. We will remind readers about this free bull sales promotional service again in coming weeks.