Banjo Paterson’s hilarious ‘The Man from Ironbark’, first published in The Bulletin in 1892, concluded ‘…flowing beards are all the go way up in Ironbark’.

Just over three decades after the iconic poem was penned, the Spencer family in 1925 started breeding Ironbark Herefords and ‘….horns (became) all the go way up in Ironbark’. 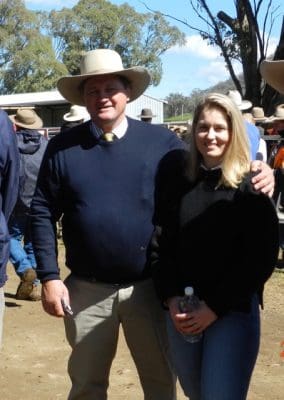 Ironbark established a Hereford stud in 1933 and on August 25 this year, will conduct its 44th annual bull sale at Barraba, NSW, offering 203 Hereford bulls – including 11 Poll Herefords.

Yes, Poll Herefords have been produced at one of the last ‘fortresses’ of the horned Hereford breed, and these polls will be offered for the first time at Australia’s largest whiteface sale – single-vendor or multi-vendor – and one of the few sales of any breed with a catalogue of 200 bulls.

Third generation studmaster Adrian Spencer admits it’s a major change of policy – not to mention a break in tradition – but with a herd of 1100 registered Breedplan recorded breeders, there are plenty of opportunities to experiment.

The infusion of poll genetics have come through two US sires, MSU TCF Revolution 4R and Churchill Stud 3134A, specially selected to provide positive genetic infusions in addition to the poll factor. Both are homozygous polls (PcPc) and both have high accuracy Breedplan figures in the top 1pc of the breed in growth traits and Index Values. Their poll progeny are lots 53 to 63 in the 148-page phone-book sized sale catalogue.

The whiteface breeds used to operate with two significant independent and competitive societies – one for horned and one for polls. They eventually amalgamated under the Herefords Australia banner with the one herd book and the one Breedplan run. The polls are clearly identified in their pedigrees.

“If there’s a good poll bull about, we’ll use it”, Mr Spencer said.

“We’re not moving heavily into polls as some studs have done, but we have identified a niche market. Ironbark is a commercial operation – not a hobby – and if we see a commercial opportunity, we will grab it,” said Mr Spencer, who now has a fourth-generation son, Hugh, back home after gaining experience in big cattle stations up north.

Mr Spencer is adamant Ironbark is not altering where it is going, which is supplying the needs of the commercial cattle producer. One of the motivations to put a toe in the ‘poll pond’ is that new potential clients have requested it.

“They obviously want the traits our horned Herefords have provided for generations, and want to access these through the horned-poll cross,” Mr Spencer said.

Leading Montana, US Herefords studs Holden and Cooper are major genetic resources at Ironbark. These ‘Line One’ herds have been calf weight recording for 40 years and provide calving ease, an absolute necessity in the Ironbark program.

US Line One provides heterosis

‘Line One’ is perhaps best described as an American-developed line-bred Hereford type selected with an emphasis on moderate birth weights, while adding performance, milk, thickness, carcase strength and predictability, phenotype, EPDs (the US equivalent of EBVs), pigment, soundness and fertility.

The Holden herd is claimed to have a breeding co-efficient of 25pc, generating uniformity and predictability. It is also claimed that breeding Line One Herefords to non-related Herefords produces heterosis of 10 to 15pc, equal to that achieved in some crossbreeding programs.

Adrian Spencer refers to ‘crossing‘ when he uses the poll sires in the 84-year-old herd of horned Herefords, and he could well have a point.

“We will be offering 36 heifer bulls at our sale this year and all lots carry birthweight EBVs,” he said.

Mr Spencer believes breeding programs are useless if they need to utilise ‘other’ breeds to safely calve heifers.

“Three things are important in a breeding program; birth weight, udder and milk. If a calf can’t suck it will die, and if there’s no milk, it won’t grow,” he said.

With Ironbark’s large herd of registered breeders, any sires that don’t work can be identified and progeny culled from the system. “Smaller herds don’t have this luxury, they have to sell the undesirables,” according to Mr Spencer.

Most stud stock sale vendors appoint perhaps one or two agents to conduct their sales. Ironbark runs with five, plus a guest auctioneer, Paul Dooley. The agents are Landmark and Elders to provide the broad national coverage, George & Furhmann who bring in buyers from the northern rivers of New South Wales, Hart Rural which is strong in the local Barraba area, and Ray White Rural has personnel who have worked well for Ironbark in the past.

Another unusual point is that in addition, online bidding can be made through two platforms – Elite Livestock Auctions and AuctionsPlus.  This is the second year the two online providers have been used simultaneously. No other stud we’re aware of uses both at once.

On a positive note for the Hereford breed, Mr Spencer, himself a former Herefords Australia director, believes the society problems are now behind it, with ‘good management and several good directors in place to take the breed forward.”

And in case you don’t know or can’t remember Banjo Paterson’s famous ‘The Man from Ironbark’ first published in 1892, here it is:

It was the man from Ironbark who struck the Sydney town,

He wandered over street and park, he wandered up and down.

He loitered here, he loitered there, till he was like to drop,

Until at last in sheer despair he sought a barber’s shop.

`’Ere! shave my beard and whiskers off, I’ll be a man of mark,

I’ll go and do the Sydney toff up home in Ironbark.’

The barber man was small and flash, as barbers mostly are,

He wore a strike-your-fancy sash, he smoked a huge cigar:

He was a humorist of note and keen at repartee,

He laid the odds and kept a `tote’, whatever that may be,

And when he saw our friend arrive, he whispered `Here’s a lark!

Just watch me catch him all alive, this man from Ironbark.’

There were some gilded youths that sat along the barber’s wall,

Their eyes were dull, their heads were flat, they had no brains at all;

To them the barber passed the wink, his dexter eyelid shut,

And as he soaped and rubbed it in he made a rude remark:

`I s’pose the flats is pretty green up there in Ironbark.’

A grunt was all reply he got; he shaved the bushman’s chin,

Then made the water boiling hot and dipped the razor in.

He raised his hand, his brow grew black, he paused awhile to gloat,

Then slashed the red-hot razor-back across his victim’s throat;

Upon the newly shaven skin it made a livid mark —

No doubt it fairly took him in — the man from Ironbark.

He fetched a wild up-country yell might wake the dead to hear,

And though his throat, he knew full well, was cut from ear to ear,

He struggled gamely to his feet, and faced the murd’rous foe:

I only wish I had a knife, you blessed murdering shark!

But you’ll remember all your life, the man from Ironbark.’

He lifted up his hairy paw, with one tremendous clout

He landed on the barber’s jaw, and knocked the barber out.

He set to work with tooth and nail, he made the place a wreck;

He grabbed the nearest gilded youth, and tried to break his neck.

And all the while his throat he held to save his vital spark,

And `Murder! Bloody Murder!’ yelled the man from Ironbark.

A peeler man who heard the din came in to see the show;

He tried to run the bushman in, but he refused to go.

And when at last the barber spoke, and said, `’Twas all in fun —

I’d like to catch that murdering swine some night in Ironbark.’

And now while round the shearing floor the list’ning shearers gape,

He tells the story o’er and o’er, and brags of his escape.

Them barber chaps what keeps a tote, By George, I’ve had enough,

One tried to cut my bloomin’ throat, but thank the Lord it’s tough.’

And whether he’s believed or no, there’s one thing to remark,

That flowing beards are all the go way up in Ironbark.