THERE can be little doubt that producers making selection decisions on future sires have access to a broad and comprehensive range of data.

Much of the information producers require, including pedigree and performance information has long been available through BreedPlan EBVs.

The inclusion of genetic data has enhanced the value of EBVs as well as providing greater certainty regarding genetic diseases that are an issue in many breeds.

Although data such as EBVs has been around for some time, there are still some common misconceptions held by producers that can influence their selection decisions.

One of the more common misconceptions relates to the Accuracy of an EBV.

The easiest way to consider what accuracy refers to, is to focus on what an EBV actually is. EBV stands for Estimated Breeding Value. Estimates change over time as more becomes known about an animals breeding progeny. Over time the accumulation of data brings the EBV closer to the True Breeding Value of an animal.

Accuracy is the measurement that explains the amount we know about an animal. Higher levels of accuracy mean that much is known. This information includes performance data, progeny data, carcase feedback, genetic information and pedigree. High accuracy numbers mean that an EBV is unlikely to change in value.

The accuracy figures that are provided on these bulls are derived from pedigrees, performance of parents, as well as from relationships with other traits. Increasingly the input of genetics through Single Step analysis also increases accuracy.

The key message for producers to consider is that low accuracy EBV values for individual bulls are likely to change over time. Breedplan offers a useful guide to accuracy and its potential for change in the following ways:

When confronted with a sale catalogue, producers should consider a few key points.

The first is to consider only the bulls that have traits that are important to a breeding objective. The next is to focus on bulls that are above average for breed average in those traits.

These are the animals that are more likely to have a bigger influence within your herd.  Within this selection of animals, there may be bulls that have greater accuracies and these should be the referred bulls to consider for further evaluation at a sale.

Finding above average, high accuracy sires can be a challenge that is unrealistic for many producers. In these cases, the compromise is to seek bulls that are at least above breed average for the traits that are of focus.

A second key point to remember is the direction of most herds is not dependent on a single sire alone. Often it is the influence of a team of bulls that will determine breed directions. In some cases individual bulls within the team may have ‘low’ EBV accuracy, overall the team’s accuracy for that EBV will be much higher. 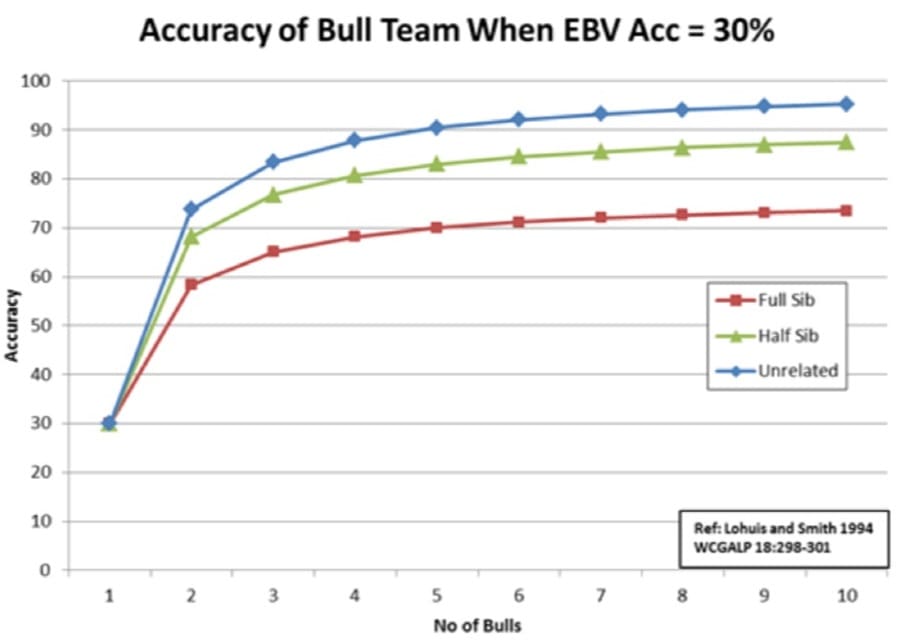 The more bulls within a breeding team, the greater the increase in overall accuracy for the team.

Ultimately, for producers choosing sires, the accuracy of an EBV will help them have greater confidence in the bulls’ potential to move a herd closer to breeding objectives.

If a desired bull isn’t as high accuracy as expected, it’s important to select sires that are better than breed average. Over time, this combined with the role a team of bulls plays within a herd should help producers see positive changes within their breeding herd.