Seedstock producers urged to focus on ‘breeding for a brand’

SEEDSTOCK cattle producers need to focus more on breeding animals to fit a brand program or value-chain, rather than breeding for a ‘market’ or a ‘breed type’, a leading animal and meat scientist told last week’s MLA genetics forum in Brisbane. 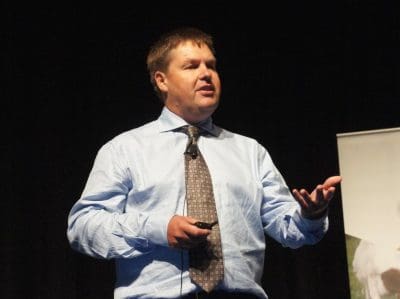 Genetics consultant Dr Alex Ball, said ‘breeding for a brand’ was a totally different dynamic for the Australian beef and sheep industries.

“There’s a lot happening currently within the red meat industry,” he said.

“It’s becoming a lot more sophisticated, based on a set of highly-integrated value-chains, and producers will need to learn to operate within those value chains.”

“That’s the key cultural change that producers will need to get used to. We’re not just producing one particular product at one particular point in the supply chain – we’re producing a product that goes all the way across that sophisticated value chain.”

And what decisions seedstock and commercial producers made in areas like genetics, and who they mad those decisions for, were going to be important in contributing to the success of that value chain.

Displaying a range of successful large scale beef brands in his presentation, Dr Ball said in future, successful producers would manage and utilise information that would help them deliver genetics and cattle that better fitted each brand’s requirements.

“That will involve embracing technology changes, and challenge some really fundamental beliefs behind today’s livestock production,” he said.

“That’s the basis of value-chain competition, and the basis for how we are going to have to move forward.”

“No longer do we expect breed to have some of the connotations it has had earlier, because it is possible to put a particular breed across all of the northern beef herd, and suddenly the (negative) quality issue that was there for the past 30 or 40 years is going to be removed, in one generation,” he said.

“How does that change southern production? Southern producers up to now have had the luxury in their production system of having an eating quality differential. But with the change that’s happening in the north, they will in future have to compete on a cost of production basis.”

Much greater information flow would be another trend, Dr Ball said.

“We’ve wasted so much time thinking about how we control data, and how we protect data and stop someone else from using it. But in reality we will only get benefit from data if somebody else is using it,” he said.

“There’s some big changes coming. Value chains are placing demand on a whole range of different sectors. In future, if you’re going to get paid as part of your chosen value chain, you’re going to have to be delivering an article that adds value to the system.”

As a result, the beef sires of the future were going to become much more focused on genetics; on what individual animals can potentially carry; and on compliance with the value-chain’s specifications.

It was the lack of compliance, rather than any advances at the ‘top end’, where the big gains in profitability could be made.

“Dropping off the bottom ten percent can change the distribution and value across the whole chain by at least $30 or $40 a head. Getting rid of that non-compliance is far more valuable than anything that can be done at the top end – that’s a real quantum shift,” Dr Ball said.

Sires best suited for particular brands would have to come into that.

During his presentation Dr Ball offered an alternative formula for measuring rate of genetic gain. The traditional formula was selection intensity x selection accuracy, divided by the generation interval.

“That’s exactly what’s happening in our industry at the moment.”

He illustrated his point with examples of differences between ‘perceptive’ bull breeding (common phrases like ‘loose skin and good sirey head’, ‘has a great top-line and walks true’), and brand-focussed breeding.

“How do we actually change the culture of shifting from perceptive to brand focussed breeding?” Dr Ball asked.

“Looking from the consumer backwards through the chain, their perception of value is driven by meat quality, cut size and appearance. The commercial brand owner’s perception of value may include weight, yield, quality and cut size, and back further at the producer level, the list gets even longer. It includes breed type, fertility, survival, growth rate, efficiency, carcase, disease resistance and a host of other factors.

“So the consumer is only interested in about three or four things in that value chain, while the breeder is worried about perhaps 30 or 40 different attributes to make a profit.

“There’s a total disconnect between market signals, and what starts to emerge is what I call value-chain ‘orphans.’ The cow/calf producer at the moment is one of these value chain orphans – they’re selecting cattle on dozens of traits, but because they sell all of their weaners in the marketplace, most of them get no signals about quality.

“Look at the list of criteria they select for, and there is virtually no connection between what a cow/calf producer and the consumer list as priorities.

“In the current system where the information flow is not going back to the cow/calf producer, they sit as a value-chain orphan, with no idea what they are producing, and how well it fits customer requirements.”

Dr Ball said this was a key dilemma faced by the industry at the moment.

Industry language was another area of disconnect in the supply chain.

“In the seedstock industry, bulls are often scanned for Intramuscular Fat (IMF), adjusted for carcase weight. There’s limited progeny testing, but we are going to start to see some change in genomics. At the same time that a producer buys a bull withy IMF figures on BreedPlan, when he sells that animal, whether it be grass or grain, he may get back an AusMeat marbling score.

“How does he relate that back to the IMF score for the bull? It’s pretty hard to do,” Dr Ball said.

“Then you go to the processor. They are looking at traits for AusMeat and MSA criteria; measuring marbling in only one muscle, so the correlation is not one between the two traits, and they are not really sure about how that IMF number in the bulls their clients are using relates to them.”

The process got ‘really interesting’ when it reached the brand owner, he said.

“Most value the great MSA system, but the key thing is most brand programs still sell on marbling, again, recorded in only one cut. The really interesting thing is that the industry is using an AusMeat marbling score, but using an MSA marbling score in the MSA index. Already we are getting a disconnect there.”

“At the final consumer level, the customer visually sees a bit of marbling, some know tenderness is associated with IMF, and the process goes in a circle.”

Dr Ball said he fielded the question all the time: “If that bull has a scanned IMF of +2, does that mean he will produce progeny of marbling score +2. The answer is, sometimes – that’s the reality of the situation.”

He provided an example using a well-known British breed to illustrate the dollar impact from selecting bulls for value-chain requirements.

The top 5pc of the breed’s sires, if measured within a value-chain, would average 117 on the breed index, while the overall average of sires selected within the breed was 79.

“That means there’s a whole heap of bull breeders out there making their own selection decisions, and that’s the reality. The differential was $38 in value per bull. Multiply that across the number of commercial bulls produced from those sires; and the number of commercial steers from those bulls, both direct and from daughters, and the impact of that that decision in operating as a value chain versus a group of informed stud breeders somewhere across that value-chain, is costing the industry $5.46 million each year.”

“And who in the supply chain is actually paying for that five million dollar loss?”

Dr Ball said a situation was rapidly emerging where producers and value chains would get access to enormous amounts of commercial performance data – from DEXA, from eating quality and other sources.

Dr Ball said it ‘just made sense’ for the broader industry to draw together all the data sets that were emerging about cattle performance. A red meat virtual data hub was going to be ‘completely essential’ for the industry to move forward, and for efficiencies to be returned across the whole industry.

“How it’s operated, what rules it operates under, who put data in and pulls it out, I don’t really care, so long as there is a will to do it. Without that will, we’re all going to be disadvantaged, because some other country or industry will do exactly the same. If we don’t do it, and a country like Ireland does, maybe in four or five years’ time, we are trying to catch up, paying for semen out of Ireland, because their rate of genetic change is so much better than ours.”

Unless the industry got the cultural change in addressing market signals right, the entire industry would lose, in the current environment it faced, Dr Ball said.