This season’s highest priced Angus bull so far, Millah Murrah Loch Up, sold this week for $85,000.

JUST when we thought we’d seen everything in this spring’s bull sales calendar, along came the Millah Murrah Angus sale at Bathurst, NSW last Thursday with a $16,349 average for 109 bulls.

That’s the highest average ever for a bull sale in the nation.

While statistics are not easy to find, it would seem the previous best average for a bull sale with 100 or more entries was in 2006 when 120 Charolais bulls averaged $11,400 at Palgrove.

Millah Murrah’s modest stud principal, Ross Thompson, said he was stunned by the level of confidence shown by buyers.

“We are witnessing a new economy in the cattle business at present,” he said.

“The fantastic increase in returns for the commercial cattleman is spilling over into the seedstock sector now. Bull sale averages are up across the board this season, but never in my wildest dreams did I think we could upstage the 2015 result,” he said.

“Commercial cattlemen are cashed up, and they are looking for quality. At all the sales I have attended this season, every time a bull steps into the ring with that little bit of extra quality, the bidding really heats up,” Mr Thompson said.

Millah Murrah is no overnight success. Founded in 1969 by Wyatt and Winsome Thompson, their first on property sale was in 1988. In 2003 as part of a succession plan, all registered females over 12 months were sold with son Ross and wife Dimity retaining 75 heifers to continue the Millah Murrah business. Today Millah Murrah is a fully registered herd running 400 breeders and recipients.

When Genetics Central asked Ross Thompson what was needed to sell 109 bulls at an average of $16,349 there was a long pause.

What about Breedplan figures? Millah Murrah uses Breedplan as a guide but does not chase the top 1pc level. They are an aid to selection.

“In the past six years we have not used a bull I have not seen,” Mr Thompson said. He is off to the US later this month searching for genetics to continue the journey of herd advancement.

Topping the sale at $85,000, and the highest selling Angus bull for 2016 so far was Millah Murrah Loch Up L133. Aged 17 months, Loch Up tipped the scales at 788kg with a 44cm scrotal measurement. He is by US sire, Thomas Up River, from a Te Mania Emperor female, Brenda H49.

And he had the Breedplan figures to match, floating in the top 1pc level for 200, 400 and 600 day weight EBVs as well as in three index figures. No wonder he was jumped on by veteran semen jockey Bill Cornell of ABS Australia along with regular Millah Murrah client Ascot Angus, from Warwick Qld.

Speaking after the sale, Mr Cornell said Loch Up was just what ABS had been looking for over the past 12 months.

“He covers all bases, displaying outstanding phenotype, with terrific fleshing and structure. He’s got an attractive pedigree for many of the mainstream modern Angus bloodlines, comes with a high quality maternal background and has a brilliant balanced EBV set. This bull has widespread appeal commercially and for the seed stock sector. He’s a pretty rare combination that represents a broad spectrum joining option for the industry.”

The next highest selling bull of the sale – and for the Angus breed in 2016 – was another Thomas Up River son, Millah Murrah Lakeside L69. His dam is high-end donor cow, Millah Murrah Prue H113, sired by Lawsons Henry VIII, a bull behind several high profile Angus AI sires.

“I like L69’s presence, his softness and his doing ability,” Robert Gill said. “He is a high quality, all-purpose Angus bull.”

“Millah Murrah has never chased fads,” he said. “They have stuck to their guns and what you see is what you get.”

Having set new saleyards records at Roma in July, with their Millah Murrah blood weaners, Jeff and Jeremy Shaw selected five bulls for their 1500 breeder operation. The Shaws’ added to their reputation as one of the nation’s leading commercial Angus herds. They paid to a top of $22,000, averaging $20,800 for their bull draft, several times outbidding stud breeders to secure the bulls they were after.

Speaking after the sale, Jeremy Shaw said he knew the cattle would be in hot demand, but he was prepared to go all the way to get what he was after.

Returning to purchase four bulls were the Crossing family from Angullong near Orange and Barrington Park Pastoral, Spring Ridge, who were buying at Millah Murrah for the first time.

The sale was conducted by Elders Bathurst’s Andrew Bickford and his team, with auctioneer Paul Dooley of Paul Dooley Pty Ltd in the rostrum.

Not so long ago a $9000 bull average was viewed with awe, but no longer, with that figure turning up regularly during the 2016 spring selling season.

Another feature this year is the new base price established for bulls of $4000. The message from the auctioneers is loud and clear – if you don’t have $4000 to buy a bull don’t bother raising your hand. 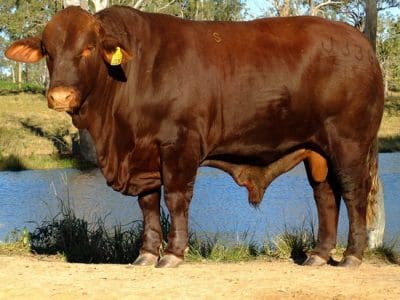 Another comment during the week was the interest being shown in heifer bulls. “Herd rebuilding means retaining more heifers, so no one wants calving problems,” was one comment.

The preference for polls was also noticeable again this week.

While Yulgilbar Santas in northern NSW sold 66 bulls at an average $7113 (including a run of unregistered herd bulls), the polls in the offering averaged $1700 more than their horned brothers.

The intense interest in bull sales this year can be gauged by the fact that more than 500 people attended the Yulgilbar sale on Friday.  Buyers flocked to the fixture from South to Kempsey, west to Inverell and north to Clermont in Central Qld.

Other highlights of the past week week included: