A common misconception in cattle breeding is that traits with low heritability are not worth pursuing. This article examines how significant genetic progress in low heritability traits can still be achieved.

Heritability not the only determinant of the speed of genetic progress

There are multiple components that determine the rate of genetic progress for any given trait. Some are determined by the breeder and include selection intensity (how hard a breeder selects for/or culls on the trait) and generation interval (average age of parents – determines the rate at which younger and superior genetics enter the herd).

These genetic parameters vary between traits, and also between breeds.

Typically, faster genetic progress occurs when genetics explains a greater proportion of the observed variation in the trait (higher heritability).

However for some lowly heritable traits, high levels of genetic variation can compensate for this and allow reasonable genetic progress to be made.

Table 1: Indication of the Genetic Parameters that influence the potential selection response. The indication of the genetic variation of the two traits was sourced from Angus Australia Sire Benchmarking Program (average across cohorts 1-3 and 5-7).

The figures in the following graphs depict the genetic trends for Days to Calving and Gestation Length that have been achieved in example Bos indicus and Bos taurus breeds in Australia.

While the generation interval will be equal for both traits, each of the other components that determine genetic progress (selection intensity, heritability, and genetic variation) will vary between the traits.

The comparison of the genetic trends of the two traits in Figure 1 reveals that the low heritability of Days to Calving is not inhibiting the genetic progress that is Progress is Possible in Less Heritable Traits possible in the trait when compared with a higher heritability trait like Gestation Length.

The differences in selection intensity and recording levels between the cattle industries in Northern (Bos indicus) and Southern Australia (Bos taurus) are evident in the genetic responses displayed in Figure 1.

While both example breeds have favourable responses in both Days to Calving and Gestation Length, the Days to Calving response is much larger in the Bos indicus breed. This likely reflects the greater emphasis placed on fertility in Northern Australia.

In addition to the greater selection intensity, the subsequent higher recording of days to calving data in Northern Australia allows the true spread of the trait to be more accurately quantified, which leads to greater observed variation in the trait.

Unfortunately due to the complexities and cost of recording, the collection of age at puberty and lactation anoestrous interval has been mainly limited to research herds.

This means that their removal will take considerable time and selection emphasis that could be better applied to other traits in the herd’s breeding objective. Many non-BreedPlan traits fall into this category.

Although the heritability of a trait is one of the key determinants of the rate of genetic progress, it should not determine whether a trait is included in a herd’s breeding objective. Instead, breeding objectives should include all traits that are important to the breeder and/or their clients’ production systems.

Some of the most important traits in cattle production (e.g. fertility) are lowly heritable. However, as demonstrated above with Days to Calving, significant gains can still be made in lowly heritable traits. 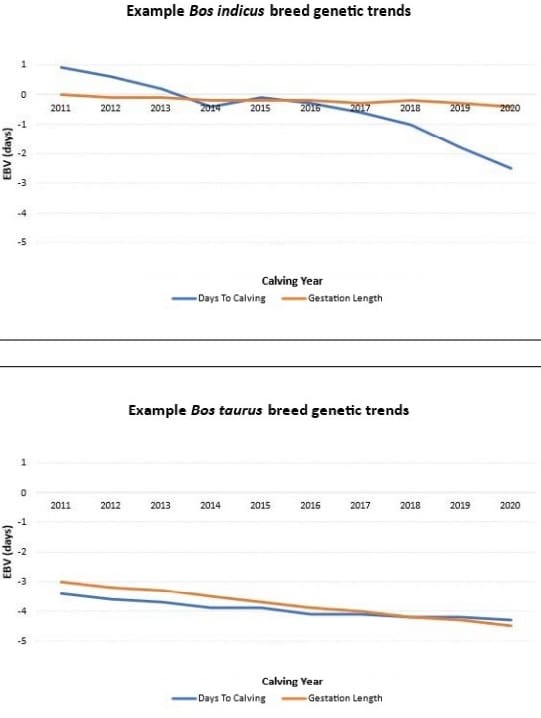 Figure 1: Genetic trends of Days to Calving and Gestation Length over the last ten years in examples of Australian Bos indicus and Bos taurus cattle breeds.