A NEW Zealand buyer has paid $25,000 for a semen share in an exciting young Australian Angus sire that has spent the past two years producing commercial calves in a beef herd near Canberra. 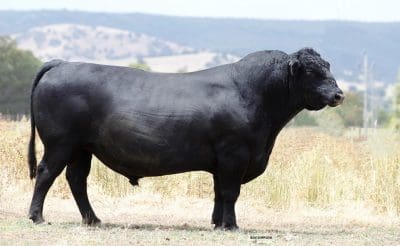 Reiland Hilary – click on image for a larger view

The bull was originally sold to Mr Carey at the 2014 Reiland sale for $13,000, with Reiland later buying back a half share.

The Te Mania Berkley B1 son is ranked in the top one percent on Group BreedPlan for all indexes, and boasts a grainfed index of +188 kg.

Mr Lane said he had has scoured the world at leading Angus sires before selecting Hilary H874 to multiply soundness, type and performance.

A director of Angus New Zealand and Angus Pure, Mr Lane is building his stud and commercial herd from 650 to 850 females.

“We liked the perfect set of EBVs on Hilary, from calving ease, good maternal, growth and carcase weight. He will help us lift our IMF (intramuscular fat) performance,’’ Mr Lane said.

Hilary will be used in an autumn artificial insemination program over Mr Lane’s first and second-calf heifers.

“We are excited to use Hilary, as he is our first Australian bull and a total outcross for us,” he said.

“Our aim is to turn progeny off grass at 18 months of age at 300kg carcase weight and 60pc yield.”

Reiland principal Mark Lucas described the bull as a ‘game changer’ for the Australian and NZ beef industries, for breeders seeking carcase expression.

It is the first time Reiland has sold genetics to New Zealand, however the stud has imported live animals and frozen embryos from the nation in the past.

“Initially the bull was sold into Mr Carey’s big commercial herd, where he was joined twice a year for two years,’’ Mr Lucas said. “He never suffered a breakdown or injury and just got on with the job.”

“We re-inspected him and bought a half share privately before using him over registered females in spring 2015 and autumn 2016. We now have calves on the ground and they are high merit carcase cattle with a lot of Angus character and high growth.”

Mr Lucas said his outstanding carcase traits were combined with positive rib and rump fat to maintain fertility in the cow herd.

“I could see the bull had great potential to grow out and carried a balance of traits,’’ he said.

“I retained 23 out of 27 of his heifer progeny – they were a class above everything else, showing great weight for age. I was not surprised in the international interest,’’ he said.