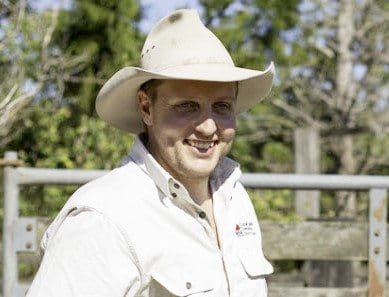 THERE are many ways to improve beef herd productivity and profitability, and one of the most obvious is to select better bulls.

Mr Jennings said the four areas to consider when buying bulls were:

“Other people may change the order of importance of these factors, but this is the order I like to consider them in,” he said.

The bull has to be reproductively sound so he can produce an adequate quantity of good quality semen and also have the willingness to serve cows.

A good way to ensure this is through a Bull Breeding Soundness Evaluation (BBSE). This is not a genetic evaluation, but is a physical assessment of the bull’s reproductive performance. A lot of sale catalogues present their bulls as ‘vet checked’. Clarify what ‘vet checked’ means, i.e. does it just mean their health status is okay, or does it mean both their health status and reproductive fitness have been assessed?

The bull has to be of good temperament and structurally sound. Temperament is a no-brainer – if a bull is of poor temperament, he will be a problem on-farm and it’s likely his progeny will follow in his footsteps.

A bull must be structurally sound because, as he gets older, he needs to remain fit enough to walk and trot across distances and not become sore, which may prevent him from wanting to serve cows.

As most producers know, the most important structural areas to be aware of are around the hind legs. Look out for post legs, or straight legs, as that exposes a bull to hock problems and arthritis in the hip and stifle joints as he gets older. A sickle hock bull also tends to be a little clumsy when mounting or dismounting from a cow, especially as they get older and heavier. Swollen hocks indicate leg problems. Excessive grain feeding or injuries from fighting can be a cause of swollen hocks.

Producers also need to be mindful of any extremes in shoulder thickness, which may lead to calving difficulties. In Bos indicus bulls the length of the sheath is important – bulls with extremely long sheaths have a higher chance of injury to the prepuce, which can result in them being unable to serve cows.

A bull should be well-muscled, which helps ensure their progeny will have adequate muscling as well. Better-muscled cattle have heavier carcase weights and tend to have higher dressing percentages, meat yield will often be higher and there tends to be a more even fat distribution over the carcase.

Obviously, muscling needs to be balanced with a farm’s environmental conditions; however, Beef CRC research showed that in British-bred cattle, increasing the muscle score of a cow from D to C had no adverse effects on her reproductive performance, even in times of nutritional stress.

Any new bulls you’re looking to buy should have superior genetics to bulls you’ve purchased in the past. EBVs are the best tool available to help provide that genetic benchmark and, therefore, genetic improvement.

Many experienced cattle producers feel they are capable of visually selecting a good quality bull but – when it comes down to choosing between two bulls with similar age, weight, muscle and fat scores, and both have passed their BBSE – EBVs can show which bull is more suitable for your enterprise. They also provide information on things that can’t be seen, such as marble score or the fertility of his daughters. EBVs allow you to determine how much bulls are genetically different for particular traits.

Genetics are cumulative and permanent. I like to use the example of a bull in a self-replacing herd. Imagine you’re going to buy a new bull in 2017 and the bull goes out and joins the current cow herd this year. You select the best of his heifers born in 2018 to become replacement breeders. For these heifers’ calves, 50% of their genetics come from the bull and 50% from their mothers. In 10 years’ time, when those heifer calves are mature breeders in your herd, 25% of the genetics of their calves will still be influenced by that original bull you bought back in 2017. When you consider that a bull in a self-replacing herd will influence the genetics of the herd for a long time to come, isn’t it better to have that extra information when making your choice?

Of course, I’m not saying bulls should be bought entirely on their genetics or EBVs, but it’s a very good tool to help increase confidence around visual selection decisions and to keep a measure of the genetics coming into the herd.

Finally, when using EBVs for genetic improvement, there are three criteria that need to be applied: