THERE’S no shortage of jokes around the term, ‘size matters,’ but when it comes to mature cow size, how big or how small a herd’s average cow is can have a significant impact on profitability.

During the past 25 years, cow size in southern Australia has been slowly increasing to now average between 550-600kg for British breeds measured at body condition score 3, according to the University of Melbourne’s Dr John Webb-Ware.

A senior consultant with the University of Melbourne’s Mackinnon Project and a specialist in farm management and analysis, Dr Webb-Ware will be presenting on issues surrounding cow size at the Border Beef Conference later this month.

Using Angus as an example, he said the good news was that this had occurred with very little increase in birth weights, but with significant improvements in growth Estimated Breeding Values – particularly 400 and 600 day EBVs.

Bigger can come at a cost

But bigger can come at a cost.

The news to be mindful of, is that cows at the larger end of the spectrum cost more to feed and will be no more profitable at high stocking rates with potentially higher risk, more variability in profit and potential consequences on herd fertility if the herd is later maturing and leaner. 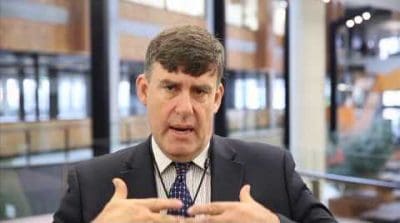 So what cow size will place producers in a position to optimise profit while minimising risk?

According to Dr Webb-Ware’s research, using CSIRO decision making tool GrassGro™ and based on a self-replacing Angus herd on phalaris and sub clover-based pastures using historic climate data, the answer very much depends on stocking rate and pasture utilisation.

Dr Webb-Ware said a 75pc increase in cow size from 400 to 700kg increased its maintenance requirement by 59pc – from about 51 Megajoules of energy/day to 81MJ/day for dry cows.

The DSE rating for dry cows also increased, from 6 to 9.5DSE/head with cow size increasing from 400 to 700kg, he said.

Size is not the only consideration

Despite impacts of cow size on fertility and reproduction not being factored into his study, he highlighted potential risks.

“Herds with larger frame size, especially when leaner, can be later maturing,” he said.

Dr Webb-Ware said any increase of frame size of the herd should not be considered alone, but with other traits such as birth weight, calving ease, fat cover and days to calving.

Read further information on cow size in this recent More Beef from Pastures  article including a video.

The Border Beef Conference, supported by More Beef from Pastures and the BetterBeef Network, is on Wednesday 20 July, from 8.45am at the Albury Entertainment Centre, 525 Swift St.

Tickets can be accessed here.