Droughtmaster breeders pause to reflect on 60 years of progress DROUGHTMASTER cattle breeders from across Australia will pause to reflect on six decades of progress and achievement this week.

It was during a low-key meeting convened during Townsville show in July 1962 that 14 foundation Droughtmaster breeders came together under a gum tree to form a new breed organisation, later to grow into one of the two most significant beef breeds in northern Australia.

Breed stakeholders will meet during the 2022 Ekka in Brisbane this week to mark the breed’s 60-year milestone. A sold-out half-day conference will be staged on Friday morning next to the showgrounds, followed by an anniversary dinner that night, after judging is completed on Thursday.

Having spent ten years in Townsville as a young livestock reporter in the 1980s, this correspondent got plenty of exposure to some of the Droughtmaster breed’s early pioneers, including founder, the late Robert Lamont (Monty) Atkinson, as well as Bob Rea of Kirknie near Home Hill and others.

The single lasting impression those men left on this reporter was that the Droughtmaster breed was moulded by a group of very astute, practical, instinctive and highly observant cattlemen.

I have a clear recollection of an interview with the late Bob Rea during a Townsville show in the early 1980s. Like many bushmen of his vintage, Bob was as deaf as a post, but we had a highly animated conversation based on his observations of his early Bos Indicus-infused cattle, made from horseback.

He was convinced that there was vast differences in efficiency between animals in the same paddock – often hostile conditions on native speargrass country with a bit of couch. Some bullocks remained shiny-fat, while others deteriorated in condition as the seasons ran out of puff – as they inevitably do across north Queensland each year.

The term, net feed conversion efficiency was not even invented then, but Bob was convinced that big variations in ‘doing ability’ existed in otherwise similar cattle, and indeed would one day be selected-for.

The industry just needed the tools to achieve it – something he encouraged the (then) AMLC to spend money on exploring. How incredibly perceptive, given the modern era of high feed costs, high production costs, the drive to minimise methane production, and the emphasis on efficient beef production.

Bob Rea would have leapt for joy if he had seen a modern-day Vytelle automated feed efficiency testing station in action.

My interactions with Droughtmaster breed founder Monty Atkinson before he passed away around 1986 were not as frequent, but it was clear that he was tarred with the same brush as Bob Rea.

To be fair, a number of North Queensland cattle producers, including Monty Atkinson, Bob Rea and others, were on a similar path, using the newly arrived Indicus genetics used over their British Devon and Shorthorn breeders.

Along with Herefords and Shorthorns, red-coated Devon cattle were surprisingly strongly represented in the North Queensland beef herd in the early half of the 20th century. In fact, the legendary Ted Cunningham from Strathmore, near Collinsville, was at one point regarded as having the world’s largest herd of pure Devon cattle.

Today’s stabilised Droughtmaster is a combination of Brahman, Shorthorn and Devon genetics.

Like all good stories, the genesis of the Droughtmaster breed in Australia includes elements of doggedness, perseverance, disappointment and occasional sheer good luck.

One of Monty Atkinson’s grandsons, Robert (Jr), recalls that ‘it all started’ for the Droughtmaster breed at his family’s original property, Glen Ruth, in the basalt country near Mt Garnet, west of Cairns. Monty later added the coastal property Mungalla near Ingham (now under Indigenous ownership) in 1943 – itself later running one of the breed’s 14 foundation herds.

Well prior to the emergence of ‘Droughtmasters’, at Monty’s urging, in 1952 a group of mostly North and Central Queensland cattlemen who were experimenting with Bos Indicus genetics (mostly half-blood bulls used over their British-base female herds) formed the Australian Zebu Cross Beef Cattle Breeds Association. Monty was the foundation president. 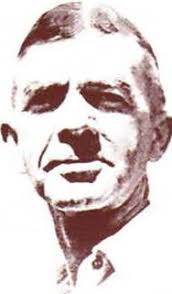 By the early 1960s, they were to disperse that group into a series of separate breed affiliations, depending on the originals of their British-breed cow herds. Among them were Brangus (using Angus cows), established in 1961, followed a year later by Brafords and what was to become the Droughtmaster Society, described above.

Even the name ‘Droughtmaster’ has an interesting history.

Monty Atkinson’s original thoughts were to call the emerging red-coated type ‘Beefmasters’ – but that name was already in use in the United States for a line of not dissimilar tropically-adapted cattle developed by Lassiter.

The original name, ‘Droughtmaster Reds’ was chosen at a meeting in Townsville in 1956.

The Droughtmasters’ first official showing as a breed took place in Townsville (also believed to be 1962), but being considered ‘exotic’ animals, they were forced to camp across the road from the showgrounds in the nearby trotting horse stables, rather than mix with the ‘real cattle.’

The first arrival of cattle tick and buffalo fly in Australia in the 1870s (imported into Darwin via a small shipment of Indonesian Bantang cattle and water buffalo) was a key event that led to the foundation of Droughtmasters and other tropically adapted breeds.

Both parasites spread into Queensland in 1886, via drovers’ mobs heading east. The results were devastating.

However he wrote that his father’s original beef herd in the Upper Herbert region behind Ingham that had regularly branded around 400 calves each year, branded just four calves the year after tick fever (carried by ticks) arrived.

Many cattlemen lost nearly all their breeders, and it quickly became evident that something had to change, or the North Queensland cattle industry would simply go broke.

“During the initial wave of the tick plague, fortunes were won and lost as stations changed hands for a song, as some owners went insolvent and walked off their properties,” Monty wrote.

“It was left to the few who could buy them out and had faith that things would right themselves, or that some means would be discovered to beat the ticks.”

The start came in 1926, when Monty set out on a three-day cross-country ride from his property, Glen Ruth, to Bluff Downs on the Burdekin to buy a Thoroughbred racehorse.

On the way, he passed through country on Christmas Creek and Blue Range stations, where he observed some ‘brindle cattle in among the Shorthorns’ that were shiny and fat, in what was a bad drought year – and most importantly, tick-free. He also noted that they would “browse on anything – not just the grass, but bushes and windfall from gum trees.”

Christmas Creek manager Bob McDowall had bought two zebu bulls that had previously been exhibits at Melbourne Zoo, in 1910. The descendants of these cattle had spread through the British-base herds on Christmas Creek and Blue Range. These were the cattle that Monty stumbled upon, per-chance, during his epic three-day ride.

In 1933, CSIRO imported a further 19 head of Bos Indicus cattle that were distributed to a syndicate of four Queensland producers.

By 1934, Monty and others including his brother Henry started using some of the half-blood red progeny bred by Ken Atkinson over their British-base Shorthorn and Devon herds. They had seen early black and white photos of Santa Gertrudis cattle in the US, and wanted to try to produce a similar breed in Australia.

They deliberately selected the red calves, avoiding the predominant brindles, laying the foundations for today’s customary Droughtmaster red coat. By 1936, the family had ‘quite a few’ of these quarter-bred and three-eighth Red Brahmans on Glen Ruth. The emphasis later expanded to five-eighths zebu content.

Early scientific advice had suggested Zebu bulls would not breed with traditional cattle breeds, Monty recounted in his book.

The 14 cattle breeders who became foundation stud breeders for the Droughtmaster Society at the inaugural 1962 meeting were widely dispersed across Queensland.