SPRING bull sales have started at a newly-revamped selling, weighing and dipping facility in the Central Queensland town of Rolleston. 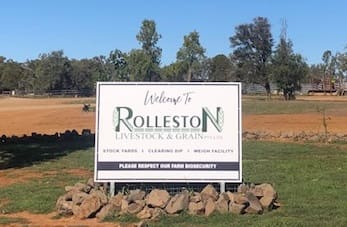 Sales have started at new stud selling arena in the Central Qld town of Rolleston. Photo: Rolleston Livestock and Grain

Jeff and Alex York and Jason Simmons from the local Acres Rural Supplies purchased the clearing dip in December 2019 under a new company called Rolleston Livestock and Grain.

In the past two years, the company has built a 36-metre weighbridge for both livestock and grain trucks, a new set of spelling yards and a stud selling arena.

Mr York said changes to tick-line regulations allowing cattle to be treated on-farm meant the group had to look for other forms of income to make the facility viable.

“It’s still the current clearing dip as we’re on the tick line here and we just added to that,” Mr York said.

“We decided to make it into a hub so you can weigh, clear and sell bulls here all at once.”

The company purchased the property with an old set of wooden pens, which were removed and replaced with steel yards.

While there was already stud selling facilities in nearby Springsure and Moura, Mr York said there was demand for the service in Rolleston, in the heart of Central Queensland’s cattle country.

“They all drive away from here to go and buy stud sires and stud bulls,” he said.

“There’s some local studs here that had showed some interest in the facility in Rolleston, so we decided to go down that track.”

Three stud sales have already been booked in this spring; with the Broadleaf Santa Gertrudis and Callandoon Angus studs holding a sale last Monday; and the multi-vendor Carnarvon Classic Droughtmaster sale and the Meldon Park Simmental sale both to be held later this month.

Mr York said while the first spring bull sale season had been a success for the company, the group had high hopes for the weighing business. “It’s a 36-metre weighbridge, it’s one of the largest weighbridges in Central QLD,” he said.

“It can single weigh all legal configurations – they don’t have to split weigh, they can drive the whole truck and all their trailers onto the bridge.”

Mr York said the cattle industry had been the main users of the facility in the early stages, but the group expected the grain industry to increase its usage in the long-term.

“Grain is more seasonal and I expect if we have a good grain year it will get a lot more use,” he said.

“At the moment it’s being used slightly more for cattle but in the long-term it will probably be used more for grain.”