WHILE the concept of breeding livestock that have a reduced environmental footprint may not be something that all breeders have considered and/or think is valuable, consumers are already demanding more environmentally friendly protein sources.

This is only likely to increase, and the beef industry risks losing further market share if it does not respond satisfactorily. Already we are seeing Australian beef wholesalers and brands offering certified carbon neutral product into the market, with the first carbon neutral brand released domestically in 2019.

Several more have quickly followed. Additionally, Meat & Livestock Australia has stated an aim for the whole red meat industry to be completely carbon neutral by 2030 (CN30).

The aim of this article is to discuss the options that cattle breeders have when selecting animals for greater environmental efficiency and the relationship between environmental and production efficiency.

The two categories might not be as different as one might think. While achieving carbon neutrality may sound daunting, there are already breeding practices and management decisions that beef producers routinely make that will reduce the environmental footprint of their enterprises.

Victorian beef producer Fiona Conroy agrees. “I’m sure there are a lot of producers out there who are already carbon neutral but just don’t have the figures to quantify it,” she says. Fiona and her partner Cam Nicholson have achieved carbon neutrality in their own enterprise (See case study on their operation below).

Genetics alone is not the only solution to reducing carbon emissions. Other practices, such as carbon sinks (trees, pasture and soil) and dietary changes (novel feed additives like seaweed and supplements), are also going to play their part in allowing the red meat industry to achieve total carbon neutrality.

From a breeding perspective, selecting for a reduced environmental footprint is highly similar to selecting for profitable cattle. The underlying reason for this is the positive relationship between dry matter intake and methane emissions, as shown in Figure 1.

An animal that efficiently converts dry matter to beef is likely to be the animal that emits the least methane per kilo of production.

When this relationship is broken down to component traits, this relationship becomes clearer. For example, faster growth to market specifications reduces both the amount of feed required and the amount of methane emitted as the animal will be younger when marketed. Equally, a cow which fails to rear a calf not only consumes feed but also emits greenhouse gas without producing saleable progeny.

As methane is a waste product that costs energy to produce, a more methane-efficient animal will better utilise the nutritional energy that it consumes over its lifetime.

Fiona summarises the link between production and environmental efficiency perfectly. “Being carbon neutral is complimentary with the way we run our beef enterprise, because our objective is productivity. It’s much easier to be ‘green’ when the enterprise is in the black,” she said.

Breeding for environmental efficiency still has its challenges. The gold standard for recording individual animal greenhouse gas (GHG) emissions requires sealed climate chambers to measure the emissions of each animal. For cattle, this is currently only available at a small number of research facilities, however transportable chambers for sheep have recently been developed in New Zealand and a GHG EBV made available for their sheep producers.

Such a GHG EBV has the potential to be included in the existing beef cattle selection indexes. Utilising the relationships described in the previous paragraph, the existing BreedObject software can be used to create the selection indexes used in BreedPlan that incorporate any potential livestock carbon taxes into its models and adjust breeding objectives appropriately.

While the correlation between dry matter intake and methane production gives breeders the opportunity to improve productivity without compromising their environmental footprint, this approach is limited by the low levels of NFI recording.

The recording of NFI requires the measurement of growth rate and the feed consumed to support this growth. Specialist equipment is required to identify the quantity of dry matter consumed by each individual and this has limited widespread adoption due to cost and availability. Additionally, the NFI test can currently only be used in a feedlot.

This is due to the difficulty in quantifying the amount of dry matter consumed by an individual animal when grazing pasture in a mob situation. While research has shown that pasture and feedlot NFI have a positive relationship, this limitation reduces the applicability of NFI results to cows and other animals grazing pasture. This is important because cows are responsible for the majority of the nutritional requirements of a beef production system.

Research is ongoing on these topics. 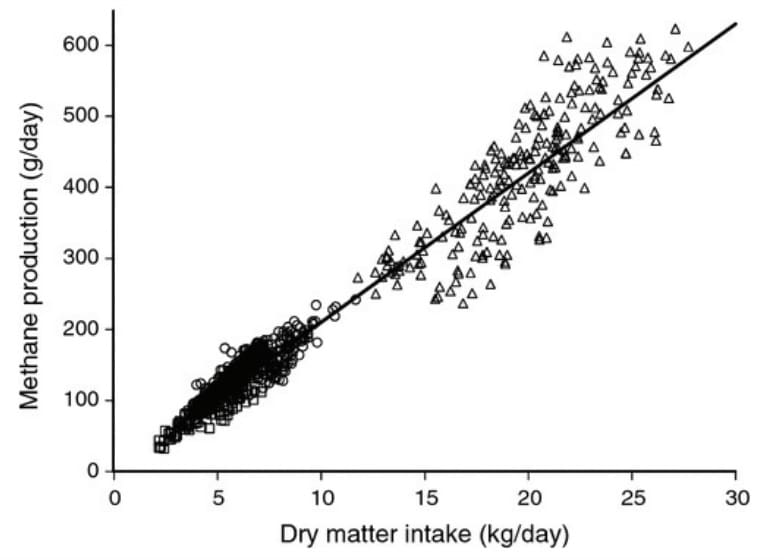 Fiona Conroy and her partner Cam Nicholson operate Knewleave Partnership, a 396ha livestock operation on the Bellarine Peninsula west of Melbourne, with an average annual rainfall of 550mm.

The high stocking rate grazing business is focused on productivity, with a self-replacing commercial Angus herd (200 cows) and a fine wool Merino enterprise (500 ewes). As a progeny test herd for Te Mania Angus, the Angus cows and their progeny are performance recorded with BreedPlan. Feeder steers are sold to Rangers Valley feedlot at Glen Innes, while breeding females are also offered for sale. 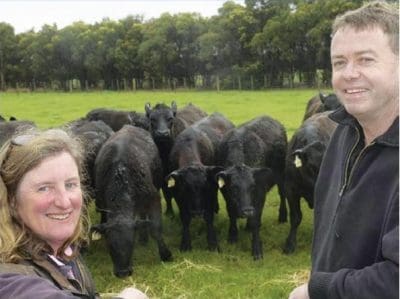 Fiona explains that they run a conventional farming system where they do a lot of measurements. “We soil test, measure pasture growth and record stock performance so that we can make evidence based decisions. We follow the mantra that if you don’t measure it, you can’t manage it.”

Knewleave Partnership has been carbon neutral since 2011. “We were probably carbon neutral prior to 2011,” Fiona explains, “although we haven’t crunched the numbers that far back.”

The vast majority – 97pc – of the farm’s carbon emissions come from livestock. “We calculate our emissions monthly because stock numbers, and their production stages, change throughout the year,” Fiona said. A small quantity of emissions comes from electricity, fuel, fertiliser and lime use.

When it comes to managing the farm’s carbon emissions, Fiona and Cam make sure that the livestock they are running are performing. “We make a concerted effort to remove unproductive animals, as quickly as possible, as they contribute to our carbon emissions but don’t add to our bottom line. This is where genetics and management are really important.”

At Knewleave, genetics are utilised to make the herd productive and profitable. “The traits that are important for us are fertility (good calving ease, moderate birth weight, short gestation length and short days to calving), good growth with moderate mature cow size, and solid carcase traits with strong figures for IMF.

All of these are packaged in bulls with indexes well above breed average, Fiona said. At Knewleave, the female herd is under plenty of selection pressure for fertility. A Fixed Time AI program covers one cycle before cows are put out in single-sire mobs to pick up one natural cycle.

Cows not joined to AI have a bull run with them for six weeks only. “We ultrasound pregnancy test six weeks after the bulls come out and immediately cull anything that is not in calf,” Fiona said. “We want females that get in calf and then calve unassisted as two year olds, then get in calf again. Heifers that have an assisted calf or fail to rear a calf are culled. A heifer that is grown out for two years – which has eaten pasture and contributed to your carbon emissions over that time – needs to perform, not fail.”

The tight calving pattern also allows Fiona and Cam to get an even calf drop with good growth rates, allowing stock to reach target weights. As long term suppliers to Rangers Valley, the couple have a good relationship with the feedlot which provides carcase feedback on their steers. This allows Fiona and Cam to produce the carcase and marbling attributes, and structure and confirmation, suited to the targeted long-feeding programs.

“One of the benefits of BreedPlan is that it allows you to assess stock for traits which you can’t necessarily see just by looking at them,” Fiona said. “The BreedPlan data also lets you look at what you have achieved in terms of genetic progress over time. We can see that our herd is improving in traits which are important for our productivity and profitability.”

In addition to breeding productive animals that will perform, Fiona and Cam use carbon sequestration to offset the emissions that they produce. Carbon sequestration is achieved through a combination of soil carbon (56pc of carbon stored) and trees (44pc). About 9pc of the farm is under trees. In addition to storing carbon, the trees also provide shelter, promote biodiversity (there are now more than 110 bird species recorded on the farm) and produce timber.

Fiona and Cam soil-test a third of the farm every year; a process they have done for 20 years.

This allows them to chart the changes in soil carbon, which has gone from 2.3pc to more than 3pc. “It might seem like a small change but our soils currently hold 141.5t of carbon/ha in the top 30cm,” Fiona said. “A small annual change, over a large area, adds up.”

The key to increasing soil carbon has been growing productive perennial pastures, promoting pasture growth with fertiliser and then practicing rotational grazing to allow for spelling of plants.

“The more pasture we grow above the ground, the more carbon we can accumulate in the soil.”

Knewleave Partnerships provides a great example of how beef producers who are chasing productivity can also reduce their environmental footprint. “Being carbon neutral is complimentary with the way we run our beef enterprise because our objective is productivity. It’s much easier to be ‘green’ when the enterprise is in the black,” Fiona said.

Fiona and Cam wish to farm with confidence that their farming system is sustainable and is benefiting the environment rather than damaging it. “It’s what all farmers want to do and I’m sure there are a lot of producers out there who are already carbon neutral but just don’t have the figures to quantify it,” Fiona said.

She believes that the carbon neutral issue is also important from a livestock industry perspective. “As an industry, we also need to address the consumer concerns and challenge misinformation that Australian red meat production is damaging the environment. MLA has set a target for the Australian red meat industry to demonstrate it is carbon neutral by 2030 – this is really important for our industry’s social licence with consumers.”