THE complementarity of Angus and Santa cattle works well for Maranoa (Queensland) beef producers James and Natalie Stinson and their family.

The Stinsons own and operate Moonya and adjoining property Tannaby, near Mt Abundance, 60km south west of Roma, running a breeding and backgrounding operation that turns off Angus x Santa and Santa x Angus feeder cattle.

Their genetics decisions stem from a drive to produce a true-to-type animal with consistency that lends itself to marketing lines of cattle into the feeder market. 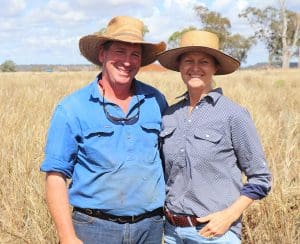 “The (crossbreds) are a totally marketable article in this part of the world. They are adaptable to the conditions in general and there is always someone who wants them, whether it is a backgrounder or a lotfeeder, or restocker producers from NSW.

They also present well, because they don’t have huge variation, they all look the same and it certainly gives them a line,” James said.

“We are really trying to narrow in on a specific type of beast and the Angus breed is pretty good on that front. We have an image in our mind what we are looking for,” he said.

“More recently we have been targeting growth and weight for age and temperament is a consideration. We find that poor temperament influences their own growth,” Natalie said.

By running a crossbreeding program, the Stinsons feel they achieve a degree of resilience to handle the extremes, with Mount Abundance regularly experiencing above 40°C during summer days and below freezing during winter.

“At the end of the day we are in Queensland, we don’t have a reliable rainfall and it gets hot as well as cold and dry. We get all the extremes. If buffel grass frosts, it loses it’s protein and the cattle still have to perform. It is that overall do-ability, that where we find benefit with the crossbreeding,” James said.

Ideally joining 900 females each year, the Stinsons run their females in mixed age mobs of 80 for ease of management and are cross-joined (Angus bulls over Santa cows, Santa bulls over Angus cows) for 12 weeks from mid-November each year.

“We structure our entire breeding program around having nothing lactating over winter and then we join to start calving in late August, early September,” James said.

“It’s all about breeding for us, keeping our replacement heifers, selecting what we like, or what we have evolved to like, and what we know does well. Fertility is the number one priority,” Natalie said.

Replacement heifers are joined for the first time as yearlings, and everything that is not in calf in at preg testing is culled.

“There are no second chances where fertility is concerned. If a heifer isn’t in calf we are not interested in her,” James said.

This no-tolerance approach has yielded results for the Stinsons, with preg testing results consistently above 80 percent, with yearling heifers returning 89pc PTIC and cows (including re-breeders) ranging from 86pc to 87pc.

“We are happy with these results. You always want more but they must have a bit of pressure and if you aren’t putting that little bit of pressure on, you aren’t improving what you have got by taking off the bottom. It also helps with cashflow,” Natalie said.

Like many producers, James and Natalie’s business has been significantly shaped by drought, and as a result the recent selection of replacement heifers has been mostly quantity-based.

“We are just trying to recover from the 2019 drought which was pretty ordinary and playing the balance between getting our breeder numbers back up, selection of replacements and shortening our joining period, coupled with time management constraints,” James said.

By shortening their joining period, the Stinsons hope to tighten-up calving and achieve a greater level of consistency again in their calf drop.

The smaller calves that are born a bit later tend not to fit the clear lines that we usually see across our herd. If we tighten joining and have tighter age groups at weaning, that will give us clearer marketing options with a deteriorating season, with management and with everything else involved in breeding,” James said.

“We noticed that our Angus cows in particular have a very tight calving window, even coming out of the drought. Their window has been tightening right up and their average calving date is ideal,” he said.

Traditionally, replacement heifers at Moonya were selected on a minimum weight of 320kg which was deemed to work well. However, the last couple of years James and Natalie have been chasing numbers to rebuild their female herd and as a result, have been only culling the animals that returned empty and that they ‘could not stand.’

“That is what we have done in the recovery phase, but we would like to get back to that minimum weight criteria and also getting an external classer to class the heifers,” Natalie said.

The Stinsons’ experience in the 2019 drought has also led them to begin planning major infrastructure works to better allow them to feed cattle over dry times.

“In the previous drought we sold everything, and then it was just too hard to get back in. To get the numbers and the genetics that we wanted took years, a lot of money and a lot of breeding.”

“During the 2019 drought we decided we would feed, we wanted to still have cattle at the end, and it worked in some ways, it didn’t in others, and it taught us a lot,” James said.

As a result, the Styinsons have put together a feeding program to take forward, with sorghum planted for silage and bunkers dug, silos for pellets or grain, a feed mixer and self-feeders purchased, a hay shed built and oats planted for hay.

“It is about preserving those genetics. We have put a bit of time into them, time is probably the biggest investment, and we have put money into them. We have discovered that you can’t just go out into the market and buy that cow back at the flick of a switch,” James said.

In addition to greater selection of replacement heifers and tighter joining periods, the Stinsons also are placing higher emphasis on their bull selection.

“We purchase all our bulls. It is the only opportunity that you have each year to introduce new genetics to stir the pot up, otherwise your gene pool gets too small,” James said.

“We primarily look at fertility. I really like the EBV  that the Angus Society has for Days to Calving, and it gives some indication of re-conception rates which essentially is what we have been trying to achieve.

“They have got to have a calf, raise it and get back in calf in 365 days. So that fertility trait is a strong priority, so that’s been our primary focus for the last few years,” he said.

“Docility, structure and growth are also of great importance to us. We use the figures as a reference and as a guide, but the ultimate decision is made on visual assessment. We just follow along with the data and if a bull has all the figures we then ask, ‘do we like his look? How’s his temperament?’”.

Significant attention is also paid to birthweight EBVs, with James and Natalie agreeing that it is a major consideration and as a result they don’t have a lot of calving difficulty.

All bulls have their BullCheck assessment completed prior to joining each year and the bulls are joined at a ratio of 1:40, meaning two bulls per 80-cow mob. A concerted effort is made to ensure that the bull herd at Moonya remains a young herd.

In terms of managing these bulls’ acclimatisation from wherever they have been purchased, James believes that basic management is key.

“Irrespective of where they come from, you must nurse them along a little bit, their environment has changed regardless, their feed has changed regardless. At the end of the day, they are bulls – they are there to do a job. I think that regardless of whether it was a searing heatwave or covered in ice, if there was a job to be done, that they would still go and do it. We haven’t had any issues with them, and they get on with the job,” he said.

The Stinson’s feel that they are fairly satisfied with the feeder article they are breeding currently and are receiving that feedback from the feedlots purchasing their male progeny.

Weaning onto oats at around 270kg, the steers are achieving gains from 1.2kg/day to 1kg/day depending on the quality of feed and are sold into the feeder market usually through paddock sale or occasionally via the saleyards.

In terms of limitations, hair is a concern of the Stinsons, and they feel that they gain adaptation benefits through crossbreeding and achieving a slicker coat.

“At the end of the day it is a Bos Taurus genotype, there is always going to be a challenge as far as the Queensland conditions go, but the positives are the weightgain, their polledness and temperament.

“We all detest dehorning, but 70pc of our calving herd now is polled, we would like to see fewer with horns and we will achieve that using the Angus genetics,” he said.

When asked what was next for the Moonya Agriculture operation, the Stinsons said there were several driving factors.

Infrastructure and preparedness for the next drought is a key focus, but James and Natalie also feel that it is achieving that next 1pc increase in production, as well as recovering the quantity and quality of their breeding herd.

They are currently involved in a phosphorus supplement trial with Queensland Department of Agriculture and Fisheries, aiming to see if greater phosphorus availability has an impact on pregnancy rates.

“We are always pushing for more, gain that extra 1pc and I suppose that is where this phosphorus work coming in, just trying to push that a little harder and try and gain out of that.

“I think we have most things covered and the trajectory is looking good,” James said.