ANGUS Australia will ring-in 100 years as a cattle society in 2019, with the breed’s centenary celebrations kicking off in January and continuing throughout the year.

Angus Australia was originally named the Aberdeen-Angus Herd Book Society and was founded in 1919 by a tenacious group of Queenslanders – George Clarke from East Talgai, Macintosh Charles from the Gootchie Stud and RS Maynard.

The first meeting held by the future society had the aim of ‘forming a society for the preservation of pedigrees’ and took place in Brisbane on August 12, 1918.  The society however did not officially materialise until its second meeting on May 9, 1919, when after a constitution was drawn up by Mr RS Maynard for a society, the group formally decided to establish the Aberdeen-Angus Society Herd Book Society of Australia.  James Cobb White from Edinglassie was appointed as the first President and RS Maynard as the Honorary Secretary.

The original society’s additional aim, ‘for the promotion of the best interests of importer, breeders and owners of Aberdeen-Angus cattle, and thereby the public generally’, resonates with the current Angus Australia aim of ‘promoting and enhancing the value of Angus’, almost 100 years on from this original sentiment.

Angus Australia today is a far cry from the society it was when first formed in 1919.

When the first Herd Book was published by the society in 1922, there were 14 listed members from every state except South Australia, and included 65 bulls, 313 cows, a number of cattle in the appendices and listed the royal show winners from the previous years.

At the end of 2017 there were 3590 registered Angus Australia members ranging from honorary life members down to junior members and a total of 67,034 calves were registered. The numbers nowadays show a vastly different society then that of its humble beginnings.

The Angus breed in Australia and the society is a generational achievement, with descendants of the original members of the society continuing to champion the breed as current members of Angus Australia. 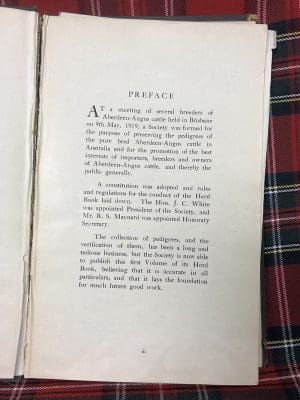 In a true testament to the resolute and steadfastness of the Angus breed, the Aberdeen-Angus Herd Book Society pressed on through depressions, wars and droughts to achieve the centenary milestone as Angus Australia in 2019.

Over the course of 2019, Angus Australia will be looking back at Angus through the ages and celebrating the achievements and highlights of the Angus breed and the society members over the past 100 years.

Angus Australia will host a National Conference in Albury NSW May 23-24, with the theme of ‘Angus Through the ages – building better Angus Beef’.  Angus Royal Show features are also set for Adelaide and Melbourne, with a number of rural shows across the country also featuring Angus.

Planning is well in place for other states to also host Angus events during the centenary year, therefore Angus enthusiasts are encouraged to visit the news and events section at www.angusaustralia.com.au to stay up to date with what is happening to celebrate the Angus breed.