ONE of Australia’s original pioneering feedlots, Robin Hart and family’s Kerwee feedlot near Jondaryan on the Darling Downs was established in 1965.

The feedlot is part of the successful Stockyard integrated beef supply chain business, which has specialised in high quality grainfed beef into Japan and other export markets for 30 years. 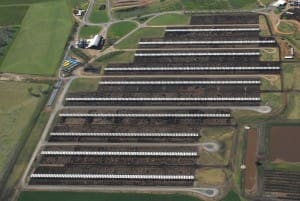 Stockyard is part of the Kerwee Group of companies, a family business established by Robin Hart in 1958.  The group owns and operates the feedlot itself, plus grain and pasture properties that supply the feedlot with stock and feedstuffs, and a Brisbane-based marketing and distribution company focussed on markets throughout the world.

Like most other early-established feedlots in Australia, Kerwee has undergone a series of expansions over the years.

Two years ago the yard underwent a capacity upgrade, lifting from 9170 head SCU to 11,100 head, following changes to Queensland Government’s environmental protocols (discussed elsewhere in this feature in coming days) which provided an opportunity.

Today, the feeding pens are divided between longfed Wagyu (mostly F4s), longfed Angus, and some custom-fed shorted programs for outside clients. Most of the Wagyu are bred under long-term contract by co-operator breeders stretching from Central Queensland to Northern NSW.

Feeding programs extending from +450 days on the Wagyu cattle and +210 days on the Angus means the feedlot’s annual cattle turnover is not as high as a feedlot specialising in say, supermarket heifers. Kerwee might average one to 1.5 cattle cycles per year, in Beef Central’s estimation, whereas a domestic-focussed feedlot of the same size might turn over four or five cycles of cattle per year.

That low cycle rate due to the use of longfed programs has some benefits in terms of reduced wear and tear on the feedlot infrastructure, as well as providing some labour savings.

One of the industry’s early steamflaking systems was introduced at Kerwee in 1991, both to enhance efficiency of utilisation of grains, but also to provide a positive environmental impact in terms of odour abatement.

One of the yard’s unique features is a separate composting business run alongside the feedlot, utilising pen waste. The feedlot was also an early adopter of pen shade, developing a unique system based on suspended cabling supporting permanent corrugated zinc sheet panels. Many other feedlots use less permanent and higher maintenance shadecloth-based sun protection systems.