YARRANBROOK feedlot near Inglewood on the Qld/NSW border can arguably lay claim to being one of the first feedlots developed as an integration strategy by an Australian export beef processor, having been established by John Dee in 1990 around the time of market liberalisation in Japan.

The John Dee processing business near Warwick, owned and operated by the Hart family (unrelated to the Robin Hart family from Kerwee (No 24 on this list) is the oldest single family owned meat processor in Australia, operating since 1947.

The feedlot’s operations were heavily driven by John Dee’s Japanese export business in its early days, cementing the company’s strong reputation in Japan as a producer of high quality marbled grainfed beef, which exists to this day.

While Yarranbrook holds a license to feed 25,000 head, it is currently built for 11,500 head capacity. 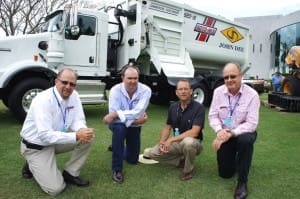 Many of the cattle on feed are Angus, or at least British-based, and sourced out of southern Queensland or the New England area.

A proposal is currently in place to expand the feedlot substantially, perhaps taking operating capacity out to 18,000-20,000 head. Work has already started towards that expansion, including clearing pen site areas, but the full implementation is yet to be finalised.

“It’s part of a change of strategy, re-looking at the John Dee business and seeing what we want to do,” John Dee director John Hart said.

“It may be that we do it in several stages, rather than as one development, growing with customer demand requirements,” he said. “It’s possible we might consider feeding some EU-eligible grainfed cattle for example, but it is yet to be determined.”

The surrounding paddocks produce a lot of the feedlot’s silage requirements, and this may also necessitate irrigation expansion, if the feedlot enlargement takes place.