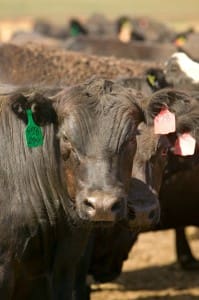 BUILT in the early 1970s by the late Uen Morgan, Lillyvale feedlot near Condamine, Queensland, has stood the test of time, continuing to successfully grainfed cattle four decades later.

As is typical of many of Australia’s pioneering feedyards, the site started with 1500 head, before undergoing a series of expansions as finances allowed, before reaching its current built capacity of 12,000 SCU. Feeding a few domestic weight cattle takes the practical operating capacity to 13,500.

The big news for Lillyvale this year is a recent license extension out to 25,000 head approved in recent months, but at this point there is no immediate plans to begin physical expansion to that level.

“It’s on the drawing board, but we wouldn’t want to put a timeframe on it,” principal Laird Morgan said. “We just want to see where this job goes to over the next 12 months, before making any decisions. Even though the cattle herd is down, and there might be some more grass around, my gut feeling is that international markets are still going to be chasing this higher quality (grainfed) meat that only feedlots can produce with consistency.”

While the balance varies depending on seasonal and market circumstances, Lillyvale currently constitutes about two thirds company-owned cattle and one third for outside custom feeding clients.

Lillyvale holds a Woolworths domestic contract supplying 230 head per week, as well as an ‘informal’ commitment to Kilcoy for 100-day Jap ox for about 1500 per month. The company also supplies a few cattle into AA Co programs.

The current balance is about two thirds domestic to one third export, but again that drifts depending on market cycles.

Grains including when barley and sorghum are tempered before rolling,

With utilisation effectively at ‘100pc’ for the past 18 months due to drought, Lillyvale has logged its biggest annual turnover ever during 2014, at around 48,000 head.

While the feedlot experimented with some wet distillers grain from ethanol production when it first came on the market, the economics was marginal, given the transport distance to the feedlot, so the feedlot has reverted to forage sorghum silage again.