GUNDAMAIN feedlot principals, Andrew and Tess Herbert, join the nation’s Top 25 Lotfeeders list for the first time by virtue of expanding their business interests with a second feedlot some years ago.

The Herberts established their original Gundamain feedlot near Eugowra in Central Western NSW in 2002, growing in stages to its current operating capacity of 6000 head. It was still too small to make the previous Top 25 report back in 2003.

In 2006 they undertook a joint venture with Coonamble stock agents, David Chadwick and John Brien in the development of the 10,000 head Coonamble feedlot (No 25 on our Top 25 list).

Four years later, the Herberts sold their 50 percent stake in Coonamble after purchasing the 6500 head capacity Ladysmith feedlot, plus 800ha of surrounding farming country, closer to home near Wagga Wagga.

Ladysmith had been developed in the late 1990s by Japanese meat importing company, Hannan Livestock, but had been dormant for three years before the Herbert’s bought the site.

It provided them with a combined feeding capacity between both sites of 12,500 head. Both sites feed a combination of 100-day grainfed and 70-day domestic cattle, all owned by the Herberts, and mostly forward-contracted to processors. No custom feeding is offered. 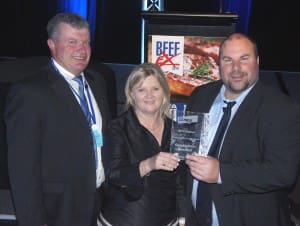 Andrew and Tess Herbert from Gundamain receive their Feedlot of the Year award from Elanco’s Trent Lawrence at BeefEx last year.

Gundamain was crowned Elanco Feedlot of the Year winner in the 3000-10,000 head division during the biennial BeefEx conference in October. Part of that win was due to the site’s strong emphasis on animal welfare management, with heavy use of Temple Grandin designs in the yards and processing area, designed to minimise stress, both on the cattle and the operators.

Dr Grandin, a pioneer of curved race designs and other innovations used widely in feedlots and processing sites, has been promoting the importance of good animal handling techniques for the past 40 years, with the aim to reduce stress.

The Herberts last year undertook a fact-finding trip to the US where they consulted with US experts on the latest research around feedlot design, planning to implement some of those features in site modifications this year.

Last year the combined Gundamain and Ladysmith businesses turned over just above 45,000 cattle.

Rations at both sites are based on tempered and rolled barley, silage, cottonseed, lucerne hay, a molasses supplement and meal mix pellets, with the inclusion of some almond hulls at Ladysmith, because of its g proximity to the Riverina growing areas.

Much of the hay and silage used in Gundamain’s feedlot rations is grown on the property and the feed rations are overseen by nutritionist and vet Dr Matthew George.

The Herbert family has been farming at Gundamain, a 1650ha property not far from Orange, for more than 150 years. Their children are the sixth generation born onto the land.