AS the only commercially-significant feedlot in the island state, the Japanese-owned Tasmania feedlot last year celebrated its 40th anniversary as a supplier of high quality Australian grainfed beef into Japan.

Although it has a licensed and built capacity for 16,000 head, the fact that the facility primarily feeds longfed Angus out to about 180 days to meet Japanese tastes for well-marbled beef means that it’s operating capacity, in practise, is limited to about 13,000 head. A feedlot’s capacity license is based on shortfed export cattle around 600kg in weight, meaning anything fed beyond that reduces a feedlot’s effective operating capacity.

During the last Top 25 industry survey carried out in 2003, Tasmania feedlot was rated at 9000 head, but again, that may have been overstated, based on licensed capacity, rather than longfed operating capacity.

Located at Powranna, south of Launceston, Tasmania feedlot is unique, for a number of reasons: 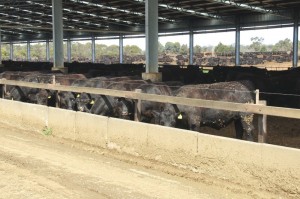 Part of the extensive permanent shedding infrastructure used at Tasmania feedlot. Click on image for a larger view

Shedding is employed in the finals stages of each animal’s feeding program, for a variety of reasons. Combined with the woodchip/sawdust bedding, the dry conditions greatly reduces dag-load prior to slaughter, while also delivering improvements in weightgain performance, both summer and winter.

The latest of three 120m x 240m sheds installed last year at a cost of $1 million is anticipated to have a payback period of just three to five years in productivity and management benefits.

Cattle carrying heavy dag burdens can suffer heavy cost penalties at the meatworks from having to shear ‘cut lines’ before slaughter to lessen the risk of bacterial contamination from dags during the manufacturing process.

Another handy ‘by-product’ of the shed facilities is the ability to harvest the water off the roofs. This produces about 45 megalitres of potable stockwater each year – a significant resource, when capital cost to supply water in Tasmania can cost $1000/Ml.

All of the bedding material and pen waste removed at cleaning is composted and sold for nursery and landscaping use. 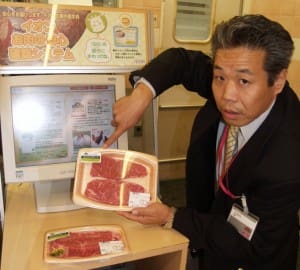 Each pack of beef from Tasmania feedlot in Aeon’s Jusco supermarkets has a bar code providing traceability back to individual animal level, feeding history and feedstuffs used, property of origin, processing location and date of processing.

The product on-shelf in the Jusco supermarkets proudly proclaims its Tasmanian heritage. Jusco supermarkets in Japan are renowned for developing and operating some of the most comprehensive individual animal traceability systems in the retail beef world.

Dry conditions across Tasmania last year saw the feedlot used for some custom-feeding for outside customers including Greenhams, mostly domestic weight British-type heifers. This tends to be done on an opportunity basis, when demand and space allows.

Feeder cattle are all straightbred, high-performance  Angus steers procured from a network of regular suppliers across the Tasmanian ‘mainland’ plus Flinders and King Islands.

The standard feeding program for the Aeon/Jusco supermarkets program is 165 days, minimum marbling score of 2, but with many now hitting scores of 3-4 with growing consistency. Barley is the primary grain component, plus lucerne and cereal straw, and the by products mentioned above. Carcase weights average 360-370kg across the yearly cycle.

Another big advance made four years ago was a grain processing move from dry-rolling to steeping, raising grain moisture levels to 20pc before rolling, which is delivering substantial productivity benefits in grain utilisation.

In no small way, the demand signals from the feedlot have been a major contributor to Tasmania’s beef cattle genetic profile ‘turning black’ over the past 20 years.