MORGAN Pastoral Co, operated by Peter Morgan and family, owns and operates two feedlots near near Quinalow, not far from Dalby, on Queensland’s Darling Downs.

While Morgan Pastoral Co chose not to provide details for this report, Beef Central’s inquiries suggest it currently ranks No 11 among the nation’s largest lotfeeders, based on capacity and estimated cattle turnover. 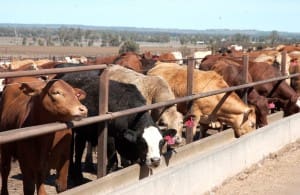 The business’s original Kurrawong feedlot built about 25 years ago now has a current one-time operating capacity of 10,000 head.

About eight years ago the Morgans purchased the neighbouring Whaka feedlot, about 4km away. Whaka has since grown from a built capacity of about 2000 head to 10,000 head today, giving a business total feeding capacity of 20,000 head.

Whaka was previously owned at one stage by Korean interests, who never executed a plan to develop an intensive dairying business on the site.

Morgan Pastoral Co’s lotfeeding capacity will soon expand further, however, with an additional 4000-6000 pen capacity expected to be completed and commissioned at Kurrawong over the next couple of months.

The two sites are too far removed to be serviced from a common grain processing facility, with separate flaker mills installed at both sites around 2007.