A YOUNG indigenous stockman from Birrindudu Station in the Victoria River District has earned the 2018 Alward Foster Memorial Award during the early stages of the Northern Territory Cattlemen’s Association annual conference being held in Alice Springs. 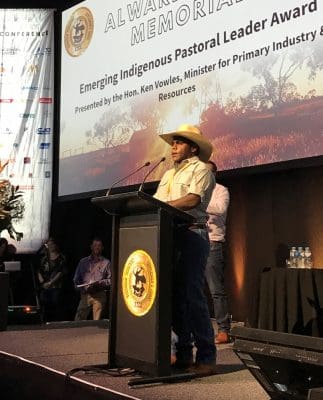 NT primary industry and resources minister Ken Vowles presented this year’s award to Travis Fisher, (pictured) before a conference audience representing the ‘who’s who’ of the northern Australian pastoral industry.

The Award recognises the effort and proficiency demonstrated by an individual within the Real Jobs Program, an initiative of the NTCA and supported by the Indigenous Land Council.

Dustin Hutley, Travis’s head stockman since he has been employed by Heytesbury Pastoral Co, described Travis as a hardworking and loyal member of his team.

“He is respectful to everyone, and in return is much respected himself,” Mr Hutley said.

“Travis will be continuing his employment at Birrindudu Station in 2018, where he will be able to contribute to the training of new junior employees.

“Travis has returned to the station, as the crew is now gearing-up for first-round mustering,” Dustin’s wife Kylie said. “I’m so excited for him to receive this award – Travis is very special to us here,” she said.

“Travis constantly displays resilience and aptitude for leadership, and is a significant role model for young indigenous men and women seeking a career in the NT pastoral Industry.”

NTCA senior field officer Kerrie Cokley said Travis was always the first one to jump up and lend a helping hand. “I look forward to working with him again this year, as he will also be a mentor for this year’s Real Jobs Program Pre-Employment Training program,” she said.

Riding horses in comfort and style will be the way for Travis now, as his prize is a magnificent Australian stock saddle sponsored by the Warriner family and supported by Geoff Newton from the Top Saddlery in Katherine.