Time to get serious about unlocking the north: Warriner 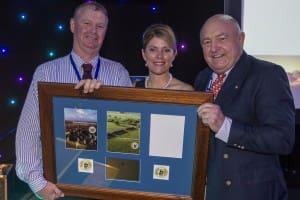 Talk of the need to “unlock northern Australia” has been a constant at Northern Territory Cattlemen’s Association annual conferences since the first one 31 years ago, outgoing president David Warriner noted at last Friday’s event.

However, despite lots of discussion, the north is still well behind where it needs to be to take full advantage of the market opportunities now emerging in Asia.

“Unlocking the north” was the theme of this year’s NTCA’s conference, and Mr Warriner devoted a large part of his final address to identifying the challenges that he believes must be overcome before the northern cattle industry can capitalise on the Asian opportunity.

Central to his speech were calls for a legislative and regulatory environment that fosters instead of inhibits investment in the north.

“I don’t know what political reform looks like but the current political situation is a disgrace, a blight and an embarrassment,” Mr Warriner said.

“That opposition parties irrespective of their political ilk are now willing to compromise national and/or state interests for their own agendas to get into power just bewilders me.

“They make knowingly impossible promises if they get into power and then intentionally break them. I believe this should be illegal.”

At present, all industry could realistically expect Governments to do while they carried so much debt was to create legal and regulatory environments that promote productivity.

Governments had become “addicted to gas” because of the royalties and jobs the industry created, but more even-handedness for landholders was needed.

“A very negative legacy of the gas and mining boom is the regulatory environment we have inherited which will hinder cattle industry for years,” Mr Warriner said.

Land tenure and current restrictions preventing the conversion of leasehold titles to freehold were also major constraints. Perpetual pastoral leases running cattle comprise 45pc of the NT land mass and turnover close to $500 million a year. By comparison, less than of NT’s land is freehold land used for agricultural purposes and it turns over more than $200 million.

Mr Warriner said capital was available from many sources around the world.

“But the environment in which this capital could be deployed is not competitive due the political, legal, and regulatory framework,” he said.

For example, for small producers trying to diversify, the cost of drilling irrigation water was too risky unless they could plant a crop that would deliver gross margins of $10,000-$15,000 a hectare.

“These are a bit thin on the ground and need to be developed and proven up.”

Mr Warriner shared a story to illustrate how potential northern infrastructure projects were sometimes stifled before they began by the parameters chosen for the economic analysis used to determine their future.

“I was talking a consultant who was up here a while back regarding redevelopment and building of a new port,” Mr Warriner explained.

“He was told to do an analysis that was based on current demographics.

“He was told to trajectorize those forecasts on an historic basis and work out if the port would give a good return.

“He did not say this officially, but the answer is a known. Given the current costs, current regulations, current level of demographics, we need at least 500,000 people and may get a port within 50 to 70 years.

“I’d say the question that should be asked is how do we get the legislation and regulation right to get the 500,000 people ASAP.

“That legislation, 100pc, is around immigrant labour, tax incentivization and land tenure change.”

Bipartisan support from both major political parties to develop the north was also essential.

The north had the market and it had the water, it just needed a business environment to stimulate and foster it.