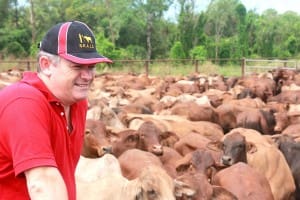 Kevin Mulvahil looks over a line of export cattle at the Berrimah Yards in Darwin.

Australian cattle exporters and Indonesian importers are urging the Indonesian Government to consider issuing permits on an annual basis instead of every quarter.

They believe the move would create cost savings in the supply chain which in turn would help to reduce inflationary pressure on beef prices in Indonesia.

Under the current system, importers and exporters are not told how many permits will be issued until just before each quarter starts.

The lack of forward notice makes it impossible to forward plan with certainty and results in a rush to deliver cattle at the start and end of each quarter which pushes up regulatory, trucking, yard, feeding and shipping costs.

Australian livestock exporters and their importing customers made the request for a move to annual permits in a meeting with Indonesian Ministry officials in Jakarta recently.

Indonesia has just issued permits for 250,000 cattle for the second quarter which starts tomorrow, April 1. The increase in volumes from the 98,000 permits issued for quarter one is intended to increase the supply of beef in Indonesia for Ramadan. However, as Beef Central reported yesterday, the new permits have largely come too late to achieve that goal.

The start of Ramadan each year is tied to the lunar calendar and gets earlier by about 11 days each year.

In previous years, as Ramadan has gradually moved through the months of September, August and July, the Indonesian Government has increased permit volumes in the second quarter to time the supply of beef for Ramadan.

However, Ramadan this year starts on June 18, which means a large portion of the 250,000 feeder cattle that will be shipped in the second quarter will arrive too late to reach optimal slaughter weights in time for Ramadan.

In terms of permits in future years, the timing will get more and more critical because Ramadan is taking place earlier in the year,” Australian Livestock Exporters Council chief executive Alison Penfold said.

“Indeed this year, bar any shipments that arrive in Indonesia in early April, all the cattle for Ramadan are already in the market (those cattle shipped under Q1 permits).”

The timing of the permit allocations are contributing to inflationary pressure on the price of beef in wet markets, because it now appears as though the supply of beef for Ramadan will be short this year.

There are already signs that cattle are being held back in feedlots to sustain supply for Ramadan, which in turn is adding further upward pressure to the price of cattle in the market.

“For the foreseeable future, Q1 will displace Q2 as the critical delivery quarter for cattle into Indonesia, if Indonesia continues to release permits on a quarterly basis,” Ms Penfold said.

She said the industry was working with the Indonesian Government to explain the production cycle and the long lead times required for producers and live exporters.

Northern Territory-based livestock exporter Kevin Mulvahil said moving to a system of annual permits would reduce a lot of costs that are associated with having to rush at the start and end of each quarter to meet Indonesia’s quarterly permit allocations.

“The live export supply chain is capital intensive, from the producer through to the feedlotter and abattoir. All participants have significant investments in assets sitting around idle just waiting for these permits to come in each quarter,” Mr Mulvahil, a former chair and CEO of the NT Livestock Exporters Association, said.

“You have registered premises suddenly having no cattle to bulging with cattle, and you have ships quite often sitting idle as well as accumulating demurrage charges. A ship needs to move all the time otherwise it costing you money.”

Receiving permit allocations earlier would allow exporters to manage the supply chain to match Indonesia’s requirements for cattle and would remove a lot of risk and costs from the trade.

“Consistency in the process for releasing permits along with an annual release of permits would create efficiencies and cost savings in the supply chain.

“We would much prefer to see the consumer in Indonesia have a cheaper product so they can buy more cattle in future.

“The current permit structure makes this a difficult objective.”