A RESPECTED environmental engineer whose ‘fingerprints’ are on many of Australia’s largest and most successful feedlot facilities was recognised with a special award presented during the BeefWorks conference in Toowoomba last week.

FSA Consulting head, Dr Peter Watts, was named as the recipient of the 2015 Elanco Award for Outstanding Services to the Australian Lotfeeding Industry.

His award capped a string of acknowledgements for achievement in different areas of the industry presented during the BeefWorks gathering, from workplace health & safety to training, and young lotfeeder achievement (see earlier report).

Dr Watts was saluted for his long-standing and invaluable contribution to the grainfed sector as an agricultural engineer. His work, stretching back 34 years, covers much of the modern era of feedlot growth, and the all-important move to self-managed quality assurance systems covering key areas like environmental management.

He first undertook feedlot project work in 1981 as a design engineer for ME McKay & Associates, an agricultural engineering consultancy, where he became a director.

From 1988 to 1990, he was principal of his own agricultural engineering consultancy, P.J. Watts & Associates, before joining the Queensland Government for four years to 1994 as executive engineer in the feedlot services division. Part of his work at this time was in managing Meat Research Corporation-funded feedlot waste management research. He also assisted in the development and application of feedlot guidelines.

During this time, he also acted as program leader (waste management) for the Cattle and Beef Industry CRC, and chaired a Murray Darling Basin Commission technical advisory group on intensive rural industries.

Much of this work revolved around systems to moderate and manage the environmental impact of cattle feedlots and other intensive livestock industries, and implementing changes to improve environmental performance and to provide data for the formulation of national feedlot guidelines. LORELLE Starr’s interest in animal welfare and the acclimation of cattle in the feedlot has contributed to her earning this year’s Zoetis Education medal, presented during the BeefWorks conference in Toowoomba last week.

Lorelle said with the increasing pressure from animal rights activists, animal welfare had never been more important in the beef industry.

“At the end of the day if a feedlot does not look after its cattle, it is likely to be shut down,” she said.

The Zoetis Education Medal is targeted at young people in the feedlot industry who have performed well in one of the tailored feedlot operations Certificate III courses conducted through New England TAFE at Armidale.

Zoetis’s intensive business unit director Fred Schwenke said the award was all about providing acknowledgement and encouragement of young people who had not only sought a career path in the industry, but who had gone to the effort advance themselves through further education.

“We’ve already heard during this conference about the challenges faced in feeding a world with nine billion people by 2050, and taking advantage of new technologies. We need young people to achieve that, so this award is about acknowledging those young people and encouraging them to stay in the industry and develop themselves through broadening their skills set.”

Growing up in Penrith, NSW, this year’s winner Lorelle Starr completed secondary school in 2013 and decided to move out to the bush to join her sister, who was working at Rangers Valley feedlot neat Glen Innes.

“We’ve had horses and animals all our life, and when my sister, who was already working at Rangers Valley gave me a call to let me know there was a job going, I just said, yeah, why not?”

Lorelle completed her Certificate III in Feedlot Operations this February at the New England TAFE while she was working as a pen rider at Rangers Valley.

After finishing at Rangers this February, Lorelle decided to move south to Rosewood NSW where she had bought a house and got a job at Ladysmith feedlot near Wagga Wagga in Southern NSW.

She said she was keen to further develop her skills in early detection of BRD in feedlot cattle, and advancer he diagnosis skills through autopsy.

Lorelle was one of four finalists selected for this year year’s Zoetis Education Medal, which also included Brendan Orr, a leading hand at Mort & Co Grassdale feedlot near Dalby; James Watson,  also from Ladysmith feedlot where he is a leading hand in the pen-riding team; and Caitlin O’Connor, a pen rider from Gundamain feedlot near Eugowra, NSW. All four finalists were awarded a swag, Lorelle received a $500 cash award towards further study. “By actually engaging them we can show some leadership and some opportunity,” he said. 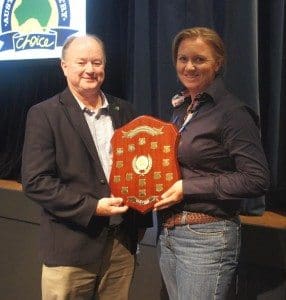 This year’s competition entries were put into two categories: best safety management system, and best solution to an identified problem.

For each award the feedlots were reviewed on a range of criteria, judged on a scale of one to five. Management and staff of Safe Work Australia helped judge the awards this year.

Over the past two years the smaller 5000-head Tungali feedlot has undergone a complete overhaul of its safety protocol. The South Australian based feedlot has put in a new mill and introduced a safety standard which means visitors now have to do inductions before entering the facility.

Feedlot manager Paul Jonas said upgrading the facilities had made Tungali more efficient, along with being a safer place to work.

“Upgrading the machinery has taken a bit of a stress out of working here both mentally and physically,” he said.

Mr Jonas said in the future, in terms of safety, he would like to see Tungali keep its record of having a low rate of accidents.

“We haven’t had an accident here at the yard for around three years now,” he said.

There were two other finalists for the first award: Mort & Co’s Grassdale feedlot near Dalby and Australian Agricultural Co’s Aronui feedlot, near Bell.

In the second safety award category for best solution to an identified problem, the winner was AA Co’s Goonoo feedlot near Comet in Central Queensland.

There were nine entries in the second category this year, ranging from meat processors and feedlot operators to Serious Rain Gear, a protective clothing company. However it was Goonoo station’s horse assessment program that was chosen as this year’s winner.

Anyone who rides a horse on Goonoo is assessed, based on a range of tasks they perform and placed on a ranking table which rates them beginner, intermediate or advanced.

Along with this, every horse, including stock that staff or contractors bring onto the property themselves, are tested based on their obedience and skills.

From there the rider is able to be matched-up with a horse which best suits their level of riding ability.

Sara Gruber, livestock leading-hand at Goonoo, said the aim was to get most riders at the feedlot to an immediate level, which meant they are able to work unsupervised.

“We often have beginner to intermediate riders, and we definitely do have beginners learning how to ride at Goonoo,” she said.

However she felt horse assessment programs like the one at Goonoo had developed were becoming a standard within the beef industry.

“Speaking to other lotfeeders here at BeefWorks, it appears that other have, or are developing similar systems,” she said.