Trials to evaluate automated detection of BRD in feedlot cattle

CUTTING-edge technology enabling automated detection of the leading cause of sickness in Australian feedlot cattle will be trialled in Australia under a new research project. 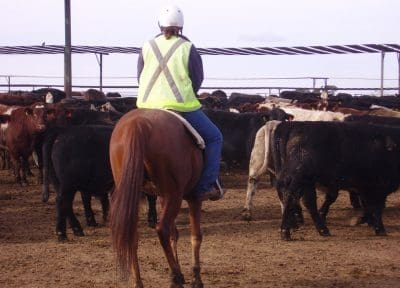 Bovine Respiratory Disease (BRD) is the feedlot sector’s biggest health cost and historically has been detected by feedlot pen riders observation  of visual symptoms including depression, loss of appetite, nasal and eye discharge, and audible sounds of respiratory distress.

“Research and development into an automated detection system in feedlots in North America and Canada over the past three years has enabled earlier diagnosis and treatment of the disease, and promoted judicious antimicrobial use by treating only true cases,” Dr McMeniman said.

The technology will be trialled in two feedlots in southern Australia in collaboration with Dr White, prior to commercialisation, to demonstrate its value compared to traditional methods of BRD diagnosis. “REDI monitors multiple factors including feeding and watering behaviour, animal movement, and social interactions of animals,” Dr White told the recent BeefEx feedlot industry conference. “This data is then transferred to a computer server and into a proprietary algorithm to make ‘calls’ on sick animals daily,” he said.

The ear tag itself is a little larger than a typical electronic ID tag but it’s applied in the same manner using a tag applicator.

“It’s applied when cattle arrive at the feedlot, and that tag immediately starts measuring behaviour as they go forward,” Dr White said. “By the time we get to 36 hours after arrival, we’ve accumulated enough data that we can start to make a disease call or determine their wellness state.”

“The system identifies things that we simply can’t see with our eyes because we don’t have the time to watch every individual animal 24 hours a day, seven days a week,” he said.

“That’s where the technology is a real benefit – it gives us the opportunity to constantly collect data and augment what the feedlot pen rider sees.”