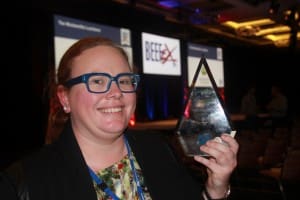 2014 ALFA Phibro Young Lot Feeder of the Year Emily Perkins with her trophy.

Emily Perkins’ feed allocator and feed truck driver is a former policeman. Her senior administration officer is an ex-school teacher.

Both are part of a successful and motivated team the 30 year old JBS’ Prime City Feedlot manager has assembled since being charged with re-opening and managing the previously mothballed facility near Griffith eight months ago.

Griffith is not a commercial cattle area, and Emily quickly realised that attracting all of the rural-oriented and appropriately skilled people she would need from afar was going to pose a challenge.

So instead she decided on a balanced approach. She strategically recruited some experienced people from away with the skills to teach others, and then actively sought to engage and then train less experienced but motivated, passionate and positive people from the local community.

Emily shared her recruitment journey at Prime City feedlot this year with the BeefEx conference on the Gold Coast on Thursday, where she joined an illustrious field of past winners to be named the ALFA Phibro Young Lot Feeder of the Year.

Emily told the conference that when she was given the opportunity and challenge to re-open the Prime City feedlot in March, she knew it would be crucial from the start to recruit the “right people”.

From her research she understood that the costs of staff turnover could range from anywhere from 50pc to 150pc of each individual’s annual gross income, and therefore was a problem that had to be avoided.

But as she began the recruitment process she also thought about the great diversity of skills and jobs that were involved in a feedlot business, and how local people from outside the rural sector could be attracted to help fill those roles.

“In what other industry do you have exposure to intensive animal husbandry, large scale animal nutrition, grain and commodity handling, accounting and financial reconciliation, environmental, OH&S and QA compliance and implementation, IT system management and the most challenging, yet the most rewarding part of our job, the coordination and management of people?” she asked.

“So my thinking started to expand – Can’t I teach people that have skills in other industries that are not necessarily agriculturally focused and apply their skills to the feedlot acknowledging that we would have to teach them cattle skills?

“And my answer was yes.” 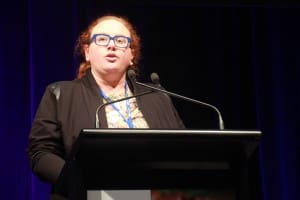 She also drew on experience she gained as an induction supervisor earlier in her nine-year career with JBS when she found that “some of the best people were those that had no preconceived ideas, just the right attitude to learn”.

The key attributes she identified as required were people that were motivated, passionate and willing to learn new skills.

Her recruitment strategies targeted people who were already engaged in other industries in the local community and people who had not yet made a decision about their career.

She has since hired 24 people in the past eight months – that number will grow to 40 in time – and said the local employment strategy had been a success.

The experience had highlighted that the person who does not necessarily fit the rural or more particularly cattle-orientated stereotype can have a large impact on the efficiency and operation of the feedlot.

“It is a success because they challenge the norm, they don’t come in with any preconceived ideas and it can be pretty robust.

“If you have a policeman and a teacher sitting around a table trying to solve a problem, they have very different ways to come at it and managing it, but if you empower those people and you give them the training and the necessary skills, they will achieve what they need to achieve.”

Emily grew up at Texas in Southern Queensland and then Tamworth in northern New South Wales before completing a dual degree in agribusiness and animal science at the University of Queensland in Brisbane.

She said she loves the intensity and the diversity of the feedlot sector, and was gratified to be named the 2014 ALFA Phibro Young Lot Feeder of the Year.

“At 30 I’d never thought I would be running a 35,000 head feedlot, so it is a good recognition and if I can inspire people then that is good too.

“I went from being mentored to now mentoring other people and now helping them aspire to be something.”

Her advice on recruitment to other feedlot managers is simply to have an ‘open mind’.

“Sometimes the people you don’t think have all the skills, they might be very grateful to have a job working for you, and they will put 110pc effort in.”

12 candidates were involved in this year’s 2014 Young Lot Feeder of the Year Award.

Six were chosen to undertake a workshop program at ALFA headquarters in Sydney, and then three were short-listed as finalists – Andrew Slack from Smithfield Feedlot, Keisha Hillam from Grassdale feedlot and Emily from Prime City.

Each of the three finalists delivered addresses and were awarded with certificates at the BeefEx conference on Thursday.