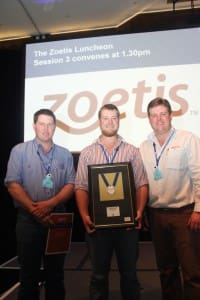 2014 Zoetis medallist Rory Hart from Gundamain Feedlot at Eugowra near Orange, NSW has no doubt that the Australian feedlot industry is where he hopes to make his career.

Rory wasn’t raised on a farm – his dad is a builder and his mum is an interior designer – but says he was always the “farm boy of the family”.

He would take any opportunity as a high school student to work with cattle and horses on his uncle’s property near Boggabri, before being introduced to the feedlot industry upon leaving school in 2012 by Andrew and Tess Herbert.

“One day after a school party I was talking to Andrew about the feedlot, and he offered me a job for about a month before I went away overseas for a year,” Rory explained.

“When I got back I was looking for work and I was thinking well, I enjoyed that so much, I thought I would go back to it.”

For the past eight months he has worked at Gundamain Feedlot as a pen rider while taking on more and more responsibilities during that time.

Yesterday he demonstrated just how far his fledgling feedlot industry career has come by being named the 2014 Zoetis Medallist at the BeefEx conference.

The Zoetis medal is designed to acknowledge excellence among graduates from the feedlot industry training courses in pen riding, mill management and feedlot management conducted through New England TAFE.

The judging criteria are each candidate’s general knowledge of the broader feedlot industry; their knowledge and skills in their particular field; their commitment to the industry; and their potential to have a positive impact on the industry in the future.

Rory was announced as this year’s winner, with James Jarrett from Rangers Valley Feedlot named runner up.

James has been involved in the cattle industry since a young age, and followed his father into the auctioneering business in northern New South Wales before joining Rangers Valley as a pen rider 18 months ago. 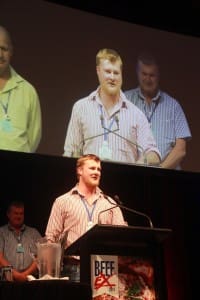 Rory told the BeefEx conference that he enjoyed working in the feedlot industry and said he believed he could make a big impact.

“I would like to become a manager of a feedlot one day, whether it be Gundamain of 6000 head or for example Jindalee with 30,000, I don’t care how big it is, I’d like to manage a feedlot one day, because I really enjoy the experience, I love working with people, and with cattle,” he told Beef Central.

“I think it is a great industry. So many opportunities open up to you once you get your foot in the door.”

Zoetis has partnered with ALFA and the New England Tafe for the past 10 years to ncourage up and coming talent in the feedlot industry via the Zoetis Medal.

Zoetis general manager Mike van Blommestein said high turnover of staff was an issue for the feedlot industry, so Zoetis had looked at what contribution it could make in terms of retaining talent and providing development opportunities.

“Whilst we might be a company that talks about pharmaceuticals and vaccines, our biggest asset is not our products, but it’s people,” Mr van Blommestein said.

“Investing in people and making sure you retain and keep talent it is critical for the success of any organisation.”