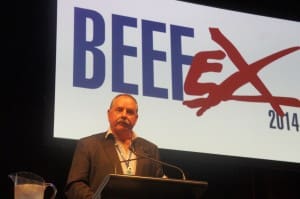 There was a sense of renewed optimism and confidence evident among lotfeeders attending the Australian Lot Feeders Association’s BeefEx 2014 biennial conference, which wrapped up on the Gold Coast last night.

ALFA president Don Mackay sensed that there was a more confident mood among delegates attending this year’s event, than there was at BeefEx two years ago.

“There’s been a lot more lotfeeders making the effort to attend; trade exhibitor numbers are up, and there’s a general positive tone evident around the venue over the past three days,” he said.

If there was an underlying trend evident in commercial trade displays at BeefEx this year, it was in greater-than-ever reliance on electronic technology to deliver ever-greater efficiency and productivity in goods and services applicable to the feedlot sector.

That was expressed in everything from remotely-managed digital feed management systems, to digitally-enhanced stethoscopes used for more effective respiratory disease diagnosis in cattle, to simplified feedlot and cattle management systems targeted at smaller lot operators.

Beef Central will showcase a selection of the new and upgraded technologies on display at BeefEx in coming weeks.

“A lot of that was about finding ways to make a feedlot business operate more efficiently,” Don Mackay said.

“The conference program this year was really about looking outwards at the opportunities that lie ahead for Australian beef. The message was, ‘there’s the opportunity, here’s some of the risks and challenges associated with it, now here’s some tools to help manage those risks’.”

“But the underlying message was, ‘don’t let the opportunity go by’.”

China might still be the big gorilla in the room, but it was only one of a number of exciting market prospects presenting themselves for Australian beef.

Mr Mackay said live export had provided a really good lesson for the broader industry in the dangers of being too reliant on just one export customer.

“We had similar circumstances in the 1970s and 80s with beef into the US and Japan, but the export beef industry is now in a much better place. With the difficulties in Japan over the past ten years, as the currency has been deliberately driven down in value, Australian grainfed beef has had to find new markets. China has come along, the Middle East, the EU, even markets like Indonesia and southeast Asia,” he said.

“Every little market adds up. People often ask me, where does Rangers make its money – is it tenderloins, topsides or trim? But the fact is you need to have a strong and vigorous market for every little bit of the carcase, whether it be tongues, offals or eye fillet. And these new-found diverse markets are delivering it. Some markets might not necessarily be high-value, but if they take big volume butt cuts, then that’s great in the overall mix.”

The grainfed industry was now in a much better place in understanding those issues, and feeding cattle specifically for market end-points, Mr Mackay said.

“So many feedlots now feed cattle to very tight specifications for very specific customers, whether that be longfeeding Wagyu, or domestic MSA. Increasingly, you have to be very good at what you do, in your own particular segment.”

Looking ahead at the outlook for 2015, he suggested that while overall feedlot throughput this calendar year would be ‘pretty high’, whether it eclipsed last year’s extremes would depend somewhat on spring/early summer weather patterns. Rain in coming months would inevitably see some feedlots reduce numbers, he suggested.

“But there are certainly a number of significant feedlots that have either re-activated or expanded this year – JBS Prime City, near Griffith is a good example – which will add momentum to this year’s result,” he said.

Unlike the grassfed sector, which is anticipating a large decline in levy revenue stream next year as a result of herd liquidation this year due to drought, lotfeeders are not anticipating a big check in cattle on feed, and hence levy revenue in 2015.

“Numbers on feed may be lower next year, but not by any dramatic level,” Mr Mackay said. “Processors clearly understand that slaughter cattle numbers will be difficult to find in 2015, given the recent weather and cattle sell-off, so many will look to put cattle on feed, wherever they can, as well.”

The profitability that’s evident in meat processing and the shortage of cattle numbers could see more cattle re-directed back into feedlots, he said.

As a result, grainfed levies are not likely to suffer the same setback that the grassfed levy stream is anticipating next year, in ALFA’s opinion.

Mr Mackay agreed that there had been ‘a little more revenue’ in the industry this year, both for custom feedlots and owner-occupied yards.

“There is profitability in the system,” he said.  “The margins are there this year, and stakeholders have done a little better than they did earlier.”

While grain price trends were always difficult to predict, the issue that was likely to cause greatest difficulty for lotfeeders next year would be high feeder cattle prices.

“It is difficult to be negative about that, because cattle producers have had a tough time, market wise, due to drought and oversupply. But there is profitability in the system, and we’ve seen the strongest international demand for Australian beef in a lifetime. As a result, sharing it around (profitability) is likely to happen next year.”

Asked what the prospects were in 2015 for all three sectors (breeder, lotfeeder, processor) making good money – an extremely rare occurrence, in recent historic terms at least – Mr Mackay said he “certainly hoped so.”

“Again, that will depend on a couple of variables. If our currency remains where it is in the US80s, or thereabouts, and we get a season, then I suspect there will be more sharing of profit within the broader industry. And feedlots, by and large, should get their cut.”

During his president’s report to members during the ALFA AGM, he said feedlots had again played a significant role in absorbing a large number of cattle displaced by the ongoing drought in Queensland and parts of Northern and Western NSW.

There had also been many external forces at work affecting the grainfed industry in 2014.

The A$ stayed stubbornly high until very recently, but was now under downward pressure which would have significant benefits for our sector, if sustained.

“Cross currency rates are not as good however with the Yen, for example, trading around the mid-90s, creating significant problems for customers in our largest international grainfed market,” Mr Mackay said.

The year also delivered both challenges and opportunities from within, he said.

Grain prices remained historically high in many areas of Australia, fuelled by strong export demand and equally strong domestic demand. The grain volumes tended to be in the South with the strongest demand for feed grains in the North.  As a result freight became a major cost for many lotfeeders.

Feeder cattle prices had again varied significantly between different geographic zones and also breed type. Northern cattle had been in high supply following the dry conditions in Queensland. Improved live export demand slowed this southern movement a little, but numbers still found their way into feedlots as the year progressed.

With the significant herd sell-off this year and the high demand for beef around the world, feeder cattle prices looked likely to continue to strengthen in the year ahead as supply tightened, Mr Mackay said.