WELCOME to Beef Central’s Top 25 Livestock Transporters feature, the first in a sequence of similar industry profiles to be published over the next 12 months.

This report profiles one of the most important, and often overlooked links in the complex Australian meat and livestock supply chain.

To Beef Central’s knowledge, no such national list has ever been compiled before. Research for this report has been exhaustive, touching every state, territory and region over the past two months, in an attempt to make this list as comprehensive, consistent and reliable as possible.

Presented here is the most comprehensive summary ever prepared on the nation’s livestock transport industry, and its largest players. The feature includes: 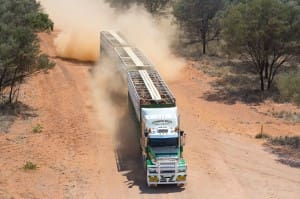 A Johnson Brothers rig plying its trade in western Qld

In combination our inaugural Top 25 members operate a total of 614 prime movers and 1368 trailers, used in road-train, B-double, B-triple and single configurations.

At an average replacement cost per prime mover of $375,000, and trailer/dolly of $190,000, it values our total Top 25 fleet at close to half a billion dollars. A typical six-deck roadtrain configuration set up for heavy-duty work today costs about $900,000 to put on the road, before registration.

Suffice to say that our Top 25 feature will contains a number of big surprises as it unfolds in coming days.

Here are some of our key observations about the entries and industry trends, which will be explored in greater detail:

One of the issues to emerge during our research was how different companies seek to overcome the challenge of ‘running home empty’ after a stock delivery. Return leg paid-freight is seen as one of the big challenges in efficiency and productivity faced by the livestock transport sector.

A range of solutions are evident in trying to manage this. For larger companies, networking and building client bases in different regions appears to be a key. Some companies in different geographic locations work cooperatively, especially during seasonal lows. Others use their websites (www.boylestransport.com.au is a good example) to post upcoming jobs, in an effort to find ‘complementary’ trucking business coming back the other way.

We at Beef Central hope you enjoy this important industry feature as it unfolds over the next fortnight.

For future reference purposes, the feature articles and the Top 25 list will remain prominently displayed on the website.