AUSTRALIA would be best served by seeking its own quota access to the EU grainfed beef market, rather than relying on loopholes allowing it to access the original quota designed for the US.

That’s the view of a number of EU beef trade customers currently in Australia to attend the Beef 2015 industry event in Rockhampton this week.

Beef Central caught up briefly yesterday with a Dutch visitor and two Germans – part of an 830-strong contingent of overseas visitors attending the triennial industry event. 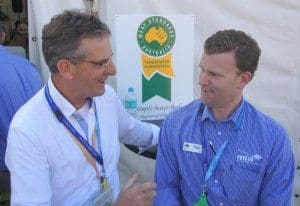 Ton Zandbergen started importing Australian grainfed beef produced by the Australian Agricultural Co five years ago, and the volume has continued to grow. Both conventional 1824 grainfed and AA Co’s Wagyu beef are imported.

Most is used in the upper-end hotel and restaurant markets. Much of the Wagyu is lower marbling scores in the 4-5 range where there is a bigger potential customer base in Europe, where consumers are more familiar with grassfed beef. Smaller quantities of score 7-9 beef are also included for more specialised clients.

“For me, Australia has done a good job in establishing a foothold in the EU beef market, but it is important that it achieves a better outcome in quota arrangements, and gets away from the current US-oriented quota,” Mr Zandbergen said.

“Australia should seek a country-specific quota, rather than sharing the High Quality Grainfed Beef quota with others. Australia already imports a lot of pork from the EU, so there is a basis for some reverse trade in beef,” he said.

Also in Rockhampton for Beef 2015 was German importer Patrick Burgers and one of his large wholesaler customers, Wolfgang Muller, from Niggerman.

Mr Burgers business, the Beef Company, has been involved in the imported Australian grainfed trade since the quota was first launched in 2010. He works closely with integrated supply chain managers Blair and Josie Angus, who produce grainfed beef under their Angus Pastoral Co Signature Beef brand program.

“We are finding customers all over Europe for Australian grainfed beef,” he said. In sourcing product from Australia, the US or Canada, his company tended to seek-out smaller supply chains (like Signature) with a strong brand story that could be carried forward by customers in top and middle level restaurants.

“It’s important for us to have that provenance, and a strong brand story about the background behind the product,” he said.

Since the grainfed quota was launched in 2010, Australian grainfed beef had established an excellent reputation in Europe, Mr Muller said.

“It’s the consistency of quality, constant availability, and is priced a little below the equivalent US grainfed beef, partly because of currency,” he said.

In his company’s case, he was looking for traces of marbling, but not necessarily an abundance. “In our program we’re looking for a marbling score of 2 or better,” he said.

Mr Zandbergen said relationships with his customers were built on future supply security and it was difficult to build that future when there was some uncertainty over where the current quota arrangement might end up.

“I think Australia has to fight for its own quota for supply to the EU,” Mr Burgers added.

“Perhaps the first thing to do is speak to France, to establish an ally. The French make excellent cars, and want to export vehicles to Australia. There are very few French cars here, from what I have seen. Cars for beef seems a logical basis for a trade agreement. Let’s make a trade.”

He said the quality and performance of Australian grainfed beef, since the grainfed quota had started, should also be a strong attraction to a trade deal.

“Shelf-life is very good, consistency is very good, cutting lines and fabrication among the Australian processing companies is very good, and the veterinary inspection service is very strong. The grading system is also very robust – we can count on what we get, we never get sub-standard product,” he said.

“All that builds towards a strong argument to take to the European Union to negotiate a country-specific quota.”

“Why grainfed? Because it does no compete with the grassfed style European beef. It’s a different segment. Politicians may say we have enough normal beef within Europe itself, but what Europe lacks is enough higher quality beef.”

Mr Burgers said there was in fact an existing quota open to Australia for buffalo exports, totaling 2700 tonnes. It had not been used for the past 20 years.

“Trade it in: keep the quota for beef,” was his suggestion. “Just change the rules.”

In the context of Australia’s current scrutiny of the beef trading language, Mr Burgers urged Australia to allow ossification to be used as a maturity gauge, instead of dentition.

European assessment is based on ossification, making Australian product a little more hard to align, in this criteria. Because of the way age was determined, and in order to meet EU’s strict age limit requirements, he said Australian cattle were often killed too young to achieve their real marbling potential.

Ton Zandbergen said he was impressed to see the extent of description about different beef products appearing on steakhouse menus in Australia.

“In the same restaurant, I can buy a Wagyu steak fed 400 days on grain out of southern Queensland, or a yearling Angus grassfed steak from Victoria. All the details are mentioned on the menu, and there can be ten such steak items listed.”

Mr Muller said in Germany and other parts of Europe, the menu often had just one item, described simply as ‘beef steak.’

“It’s our job to encourage the change of menu cards in Europe, so they are more like Australia, selling beef through little stories about each item’s heritage. It’s done so well, not unlike the stories on a wine bottle.”

While Australia has benefitted through access to the EU high quality grainfed beef quota since it was implemented in 2010, there are a number of potential risks ahead, driven by changing world trade access agreements and other politically-driven factors.

The tariff-free grainfed quota to which Australia has access, currently 48,200t in size, was originally designed specifically for US supply, as an ‘appeasement’ over the EU’s hard-line opposition to the use of HGPs in US beef. But Australia soon realised it could qualify under the terms of the non-country-specific access.

When the EU-US agreement was negotiated in 2009, legal advisors in both governments took the position that if the quota was open only to US beef, other suppliers could take action through the World Trade Organisation.  So over time, Australia, New Zealand, Uruguay, Canada and as of last week, Argentina, were given access to the duty-free quota, after putting in place production systems that the EU recognised as compliant with the quota’s feeding and grading conditions.

But recently, concerns have been raised by trade participants over what happens to Australia’s access to the EU grainfed quota if a Free Trade Agreement is struck between the EU and the US, or of the existing quota gets filled this year.

Any FTA established between the EU and the US would likely see the abandonment of the current multi-country supplier quota, leaving Australian product on the wharf, unable to gain entry.

While seeking access based on past performance might be in Australia’s interest, it’s unlikely there would be any guarantees that Australia would gain equivalent access to that which it currently enjoys.

Hitting the quota’s limit, originally designed specifically for the US industry, might also upset the US, possibly leading to some form of protest.

It could quite easily result in the US pulling the plug on the current GFB quota, and the quota access disappearing, commentators have suggested. That would be unlikely to happen overnight, however, because they would have to provide for their exporters adapting to any new arrangements.