Beef 2015: The most successful producers are those with the lowest cost of production 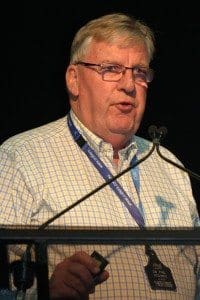 Even before Phil Holmes told his Beef Australia 2015 audience yesterday they should totally disregard cattle prices to be successful in the north, it was obvious his would be no ordinary presentation.

The respected consultant and principal of Holmes and Co was slated to deliver key findings and insights from the Northern Beef Situation Analysis (NBSA) under the title ‘How to tell if a beef business is successful.’

Instead, Mr Holmes made a “slight amendment” to his presentation to give a no-holds barred recipe for a successful northern beef business based on research and experience.

This included principles learned from the NBSA, plus some from his 20 years working in the north, put into a protocol or checklist for those buying land and livestock or expanding.

If producers did not go about things “very differently” their performance was likely to mirror that of the 80 percent of all family farm businesses in northern Australia the NBSA found were economically unsustainable, Mr Holmes said.

“Only 20 per cent of those businesses are sustainable or viable going forward.”

Mr Holmes said producers must understand the rules of the commodity game.

“It can’t be differentiated much on price, you’ve got to get rid of your production when it is ready to go, you can’t store it and you can’t effectively hedge it.

“The most successful commodity producers are the ones with the lowest cost of production and that‘s got to be your focus and totally disregard that (nominal beef price).”

Producers who believed the nominal beef price would go seriously astray, he said, rather than bringing the price back to today’s dollars, strip inflation of it and look at it in real terms.

Mr Holmes said nominal beef prices have been increasing steadily since 1985 to the current record level, while the “line of best bit” showed that real prices have been declining 1.3c/kg live weight per annum.

The only way to combat the “always” falling real beef price was to keep cost of production low or steady through productivity, he said.

“Ignore most of what breed societies say, it is mostly propaganda,” and “and ignore your neighbours (advice) unless they think you’re slipping,” he said.

Mr Holmes told his audience they need to understand prudent debt management, be wary of bank advice and not go to one with a proposal unless it was a ‘lay-down misere’.

“If you need their advice to tell you whether it (your proposal) is okay or not, you haven’t got the business skills that you need to go forward, in my view.

“There are too many people out there who are not prepared to treat debt like a brown snake, which you have to do,” he said.

“It’s an extremely powerful tool and used properly it can be used to create wealth, but if you don’t know how to manage it and you don’t understand the principles of it then it’s going to send you broke.

“The over-riding principle when you employ debt is…..the return that that you get from that investment must exceed the cost of debt or it is not going to work.”

Mr Holmes said land and infrastructure assets must be bought at a deep discount to their intrinsic economic value, not their price, as indicated by valuers and real estate agents.

“The first hurdle to jump over is a very simple calculation.

He urged potential land buyers to rate property based on land condition class, and performance relating to AEs, to determine the safe long term carrying capacity of a block and maintain productivity.

“I need to know how many AEs I can run on that block sustainably over time, adjusting for the odd drought when it happens, because I know if I exceed that for any length of time, you will see that land fall through A to D (land classes) over time.”

Mr Holmes said the corporate model in northern Australia is “to be big”, but this resulted in an integrated approach to production, with separate breeding and finishing country, meaning significant inherent stock transport and opportunity costs.

It is far better to have stand-alone profit centres, with land systems on each property to allow finishing, he said.

“Try and buy a block that can do the lot (breeding and finishing) and have that as a stand-alone profit centre.”

Mr Holmes said northern beef operations would struggle to be viable with fewer than 5000 AEs turn-off annually and it was “absolutely impossible” with less than 1500 AEs, but there were “dis-economies” of scale.

“That’s the tipping point for northern beef herds, when you start to go over 30,000 AEs there is a 50pc chance that your business performance is going to start to decline.”

Due diligence on infrastructure and staff needed

Mr Holmes urged buyers to do their due diligence on a property’s infrastructure.

“You can buy infrastructure far cheaper than you can build it.”

First class staff must be attracted and retained, with performance and incentive payments, responsibility and accountability, he said.

Mr Holmes’ said key performance indicators should be benchmarked for improvement and these included:

– in the long term keep equity above 85pc, especially if a family operation

– an interest cover four times, ie. EBIT is four times the size of the interest bill.

Mr Holmes said the NBSA showed that the average northern family-owned beef business could not afford to have any debt, because the level of cash coming out left “absolutely nothing over” after interest was paid.

The herd is all about productivity

Mr Holmes said productivity in a beef herd is about reproductive and mortality rate, and turn-off weight.

“That herd if it is functioning properly should be producing in excess of 100kg of beef per AE across the whole business.

“If it falls much below that you won’t achieve that $90 EBIT per AE.”

Labour productivity must be greater than 1500 AEs per labour unit, he said.

“Below that your labour and labour-related costs will just dominate your overheads and swamp the result.

“At the moment about 2000 AEs per full time equivalent is where you want to be and if you go much above 2500 the wheels will start to fall off the business.”

Cost production should be less than $1/kg live weight

Mr Holmes said the cost of beef production preferably should be less than $1/kg live weight.

“It is one of the single most important figures you need to know and ideally it has got be under a buck.”

Claims of 90pc calves weaned and two per cent mortalities were “absolute rubbish” and should be ignored.

“The Northern Beef Report showed that the average was 55pc calving and the breeder mortality survey that MLA did recently (showed that) nine percent of the breeders in paddocks across Australia, die every year.”

“That’s why the people in the live export trade are on a hiding to nothing — they are not producing enough kilograms.

“If the country won’t let you sell heavy, at least heavier steers, don’t buy it.”

Mr Holmes said producers had to be able to control mate heifers by restricting their exposure to the bull, preferably 12 weeks or less.

“If the country won’t allow you to do that, don’t buy it,” he said.

Mr Holmes said producers should not buy any bull that is not extensively described with (Group Breedplan) Estimated Breeding Values.

“I don’t care how good it looks, how many ribbons its sire has won, or how charming the breeder is, don’t buy it,” Mr Holmes said.

“Go and buy a bull that is going to affect your income for the next 15 years from someone who is prepared to describe an animal in objective terms.”

Mr Holmes said he had not seen many investments in northern Australia made on a similar protocol.

“Maybe that’s one reason why the northern beef industry is in the mess that it’s in.”

Mr Holmes urged his audience to read the NBSA report and attend an MLA-run BusinessEDGE course.