In all, 13 stud breeds were judged on the opening day of the Landmark Stud Cattle Championships, representing one of the largest competitions of its type ever staged in Australia. 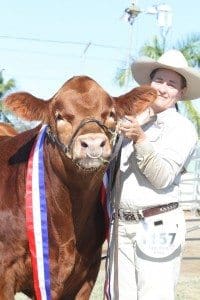 Grand and calf champion Gelbvieh bull, GN Kings Ransome led by Claudia Campbell. Click on image for a larger view, or access via gallery at base of page.

Another hugely popular event was the junior led steer competition which attracted a large crowd on spectators on the opening day of judging.

There were also strong showings in the Limousin and Hereford/Poll Hereford rings as well as the Charbray and Murray Grey breeds.

Click here to access each day’s detailed stud beef class results, as they are posted by Beef 2015.

Presented in the gallery below is Beef Central’s photographic summary of Day One’s action. Click on the images to scroll through.