Unsure what genomics could mean for Australian cattle in future? At a Meat & Livestock Australia-hosted genetics forum at Beef 2018 in Rockhampton, leading geneticist Dr Ben Hayes from the University of Queensland gave producers a brief history of how genetic science has been applied to livestock production and why genomics is seen as a major game changer to accelerate genetic gain in future. This is an extract of his speech:

LET’S reflect on what we have learned after applying modern genetics – providing the pedigree and trait measurements to get estimated breeding values (EBVs) and then selecting on them. 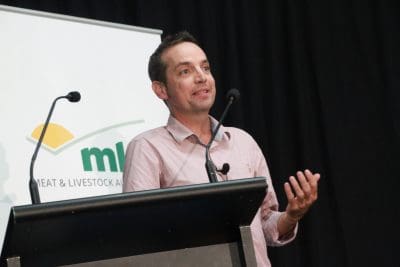 What we have learned is it is very powerful science.

In the dairy industry milk production has more than doubled over 50 years as a result of selecting on EBVs.

We’ve also learned it is a very bad idea to just select for a single trait, and the dairy industry is maybe the exemplar of this, where selecting for milk production for say 40 years led to a rapid decline in fertility, because some of the genes involved in increasing milk production were the same genes that affected fertility, but in an unfavourable direction.

So it is very important that we balance what we are breeding for, balance our breeding objective. The beef industry has actually been on the front foot in terms of the science of this for about 20 or 30 years.

In Southern Australia the traits that have been recognised as important to breed for are growth, carcase traits, reproduction, more recently, intramuscular fat, and even more recently traits like feed efficiency.

And these are all incorporated into indices that try to balance up the emphasis on those traits to get maximum profit out of selecting the animals, such as the Breedplan heavy grain index.

In northern Australia the traits and the emphasis are a bit different, there is emphasis on growth but also increasingly on reproduction, as it is increasingly recognised that fertility is a key driver of profitability, and the Breedplan Jap Ox index recognises this and tries to weigh the traits to generate the most profit.

Some of these traits are much easier to select for than others. Growth is an easy trait to select for, so the temptation is to select just for growth and to go hard for that trait.

That is not a great direction to take, because traits like fertility are so important and fertility is a major contributor of profit. Feed efficiency is as well, although we have less data about that trait at the moment.

Traits like fertility are hard to breed for. You have to collect a lot of data over many years before you have a handle on fertility.

There are some studs that do a really good example of this, Collins (Collins Belah Valley, CBV) being an excellent example, there are some others as well, but in general these are hard traits to select for.

This is where genomics comes in.

If you can achieve this then you can accurately identify the young bulls that carry the best genetics for fertility as well as the other traits and use them as early as possible to accelerate genetic gain.

I said there if we can achieve this.

What is actually required to get to this point where we have accurate genomic breed values for fertility, as well as for the other traits?

What is required is very large data sets, where we have traits measured on the cows for their fertility, repeated pregnancy tests, ideally the number of calves they have over their lifetime as well as traits like age of puberty and so on.

And we also need those cows to be run across DNA marker panels so we have information on their DNA, on their genome, so we can put that together to get their genomic breeding values.

This is already happening; the Brahman breed already has a genomic breeding value for days to calving.

And that is terrific.

What is actually happening at the moment is that there are ongoing projects to put together these very large data sets. In some breeds the beef information nucleus projects have been running to accumulate carcase data.

For fertility there are at least two projects that are running at the moment, one on research stations, and one on collaborator herds across the north, and I will just go through both these projects:

This technology is moving very rapidly. On the lab side it is actually being driven very very hard by the human genetics community, the biomedical people.

We periodically look over the fence and borrow technology from them.

One bit of technology that is pretty exciting is the ability to sequence animal’s genomes really, really quickly. So potentially within minutes.

And this could lead to crush side genotyping. So imagine you have got your cattle in the race, you pull a tail hair, at one of the race, stick it in to a machine, and this is machine you might stick it in: 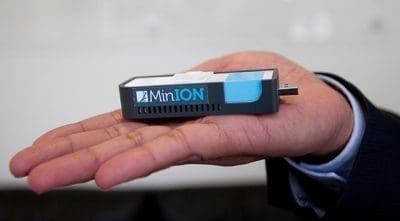 This is actually a DNA sequencer that is the size of a USB stick and it reads off the genome of the animals.

And that means that by the time the animal gets to the crush, you might have not only its genome sequence, but through your computer a generated genomic breeding values for the animal.

Then you could decide: ‘ this heifer has really poor genetics for fertility, she is less likely to get pregnant, we are going to have to cull her, whereas this other heifer, the prediction is she will have lots of calves over her lifetime, we will keep her’, so is really exciting.

So to finish up, it is really important for breeds to balance up the different traits they contribute to profitability, including fertility, and genomic breeding values are really an opportunity to accelerate genetic gain.

The industry has a couple of challenges here, one is we need to collect these fertility phenotypes, and that is going to be an ongoing job. One thing we have learned in genomics all around the world, in Ireland as well, you just need to keep collecting this data to keep backing up genomic predictions, the job is not over once we have finished these projects, that is absolutely critical.

There are exciting technologies on the horizon like crush side genotyping.