IF THERE was a role of honour for Rockhampton’s Beef 2018 event, then surely Russell Pearson from Bull Creek at McKinlay in the state’s northwest should be on it.

The well-known cattleman has been to each and every event since it started in 1988, and he’s seen plenty of changes along the way. Russell Pearson, from Bull Creek near McKinlay in Queensland’s northwest, has seen massive changes over the 30 years he has attended the Beef Expos in Rockhampton. Click on images for a larger view

The octogenarian and his family run 12,000 cattle in a certified-organic production system which he adopted about 13 years ago.

Beef Central caught up with Mr Pearson as he was about to watch the interbreed judging.

While it was the fourth day of the event, he was still eager to see all that the five-day Beef 2018 had to offer.

“It’s called Beef Week – so I come the first day and I stay til it closes,” Mr Pearson said.

He recalls the first event as something worth travelling for, despite what he said were tough enough circumstances for the industry at the time.

“It was an event that was planned to celebrate Australia’s bicentenary, and I think it was initially meant to be a one-off, but since then it has been every three years,” Mr Pearson said.

Mr Pearson said despite the first event being much smaller, he still enjoyed what it had to offer not only in terms of learning but also meeting and talking with fellow producers.

Fast forward to 2018 and there are definite changes that he has seen.

“There are more industrial and trade sites now and that is good because there are developments in this area all the time.”

The nature of competitions has also changed, especially the breeds that appear in both the stud and commercial judging competitions.

“There are now more flatback cattle in the commercial cattle judging (done at the nearby Gracemere saleyards),” he said. 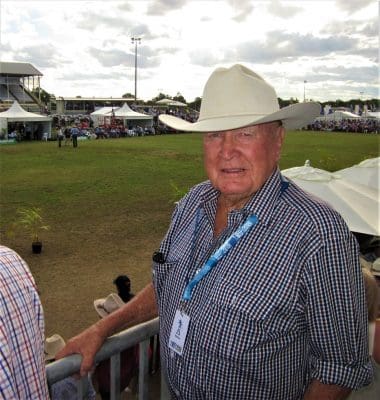 He’s a fan of learning, but not so much of the seminars, especially those which offer technology which may not be available for many years.

“We are here to learn, but we are also here to enjoy the event – it’s not an event you attend purely to be educated,” Mr Pearson said.

As Beef 2018 drew to an end last week, Mr Pearson described it as a “magnificent international event”.

“Blair Angus (the chairman) has done a superb job which goes along with him being such a committed cattle producer,” he said.

“There were 600 international visitors here which really shows how it has become a world event.

“They are here to look at our cattle but also to do business and that’s a reflection of how far the event has come.”