Dame Quentin gets Ilfracombe, women into the conversation

DAME QUENTIN Bryce has visited 55 countries around the world, and her husband is sure that in every one, the former Governor General of Australia has mentioned the home town of her childhood. 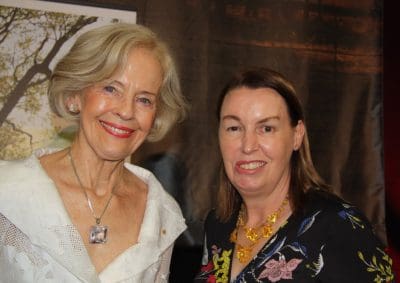 “My husband says he can’t believe I can get Ilfracombe into every conversation,” Ms Bryce said.

It was a message that resonated with the 500 women who gathered at the Westpac High Tea, one of the many social events on the Beef Australia 2018 program earlier this month in Rockhampton – the city the young Quentin thought of as “the big smoke.”

As the event’s guest speaker, Ms Bryce spoke about the importance of friendships, speaking out, the arts, and more room for women in top spots.

Ms Bryce said she would like to see more women in decision-making roles, and even though the rural sector was one where women were taking leadership roles, improvements could be made.

“I’d like to hear more women’s voices – it’s the most important tool we have.”

“Just keep pushing. It indicates how much work has to be done before we get equality for women.”

Ms Bryce’s recollections of growing up in Ilfracombe in the 1940s involved her parent’s commitment to education, for which she has always been grateful, and a society with rigid expectations of children.

“That was that me and my sisters should be seen and not heard, be beautiful daughters, do our best…and be extremely well behaved, especially when you were visiting anyone.”

These days, Ms Bryce sees children as much more empowered.

“A young girl in primary school years is a very powerful creature. They have a sense of independence, creativity, and a lot of that starts to get squashed out of them.”

She said the key to developing women leaders was to nurture that sense of self, and the power of friendships which helped to do that could not be overestimated.

“Sometimes we all need a poke between the shoulder-blades.”

“It’s about having confidence within ourselves to take the first steps, to stop thinking we’re imposters and we couldn’t do that.”

Ms Bryce played host to tens of thousands of city and country schoolchildren in her time as Australia’s head of state, and chatted with many, some of whom she later found out named one of their animals after her.

“I love the way country kids are very articulate. They are great conversationalists.”

For some, the stark contrast to their drought-ravaged home environments was what impressed them most about the vice-regal residence.

“I loved seeing country kids come to Government House, and some would sit down and start patting the green grass.”

Ms Bryce was a lawyer before she moved into executive positions which promoted human rights, gender equality and improved childcare.

She said regardless of wealth or standing, the principles of courage, kindness, service, civility and respect could put all Australians in good stead.

“It’s about having respect for our own health and respect to develop our own potential.”

Role for the arts

Ms Bryce has 12 grandchildren, and said the greatest contribution she could make to their lives was to expose them to the arts.

“What I want to do…is build their stores of resilience to cope with whatever changes they have to… and the way I do that is through the arts.”

Ms Bryce said the messages in performances and exhibits, and the perseverance and dedication which drove the artists who created them, helped young people to see their own potential.

Ms Bryce said part of her advocacy for rural and regional Queensland involved encouraging those involved in performing and visual arts to step outside the metropolises.

“I’m always asking companies about where they go, and when will they be going to rural Queensland.”

Ms Bryce has continued to work and travel since stepping down from the Governor-General role in 2014.

She headed the Domestic and Family Violence Taskforce, which produced the Not Now, Not Ever report and put domestic and family violence on the public agenda, and chaired its Implementation Council for 12 months.

Mr Bryce is also an ambassador for the Murdoch Children’s Research Institute, which receives all funds raised from her 2017 book, Dear Quentin – Letters of a Governor-General.

“I love to visit our remote indigenous communities, rural centres and regional cities such as Rockhampton, as there’s a strong sense of community,” Ms Bryce said prior to the Westpac High Tea.

“I think growing up in the bush helps build resilient and strong personalities as many live in close knit communities where people depend on each other,” said Ms Bryce.