Michele Fleming and daughter Tanya from Glendale Stud near Serpentine, WA, have three heifers travelling 5500km to compete at Beef 2018

IF THERE is such a thing as a long-distance exhibitor award at Beef 2018, it will surely go to an intrepid Western Australian stud breeder who is bringing her Gelbvieh entries more than 5500km across the Nullabor to compete.

Michele Fleming, who with husband Barry breeds Gelbvieh and Red Angus bulls at their Glendale Stud near Serpentine, not far from Perth, has entered three Gelbvieh heifers in stud beef classes at Rocky.

The family is repeating the exercise they undertook three years ago at Beef 2015, when they made their east coast debut as live cattle exhibitors, with a single heifer which went on to be judged calf champion. 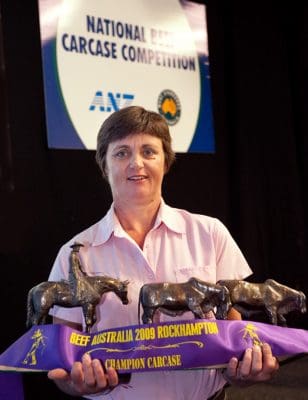 Six years earlier, however, the Flemings won the Beef 2009 carcase championship, with pen of Gelbvieh cross steers processed at Daadanup Butchering Co. Three years ago, Mrs Fleming accepted the Beef 2015 award for champion and reserve champion pen of carcases on behalf of her neighbour, Bruce Campbell.

The Flemings have bred Gelbvieh since 1992, selling most of their bulls to commercial cattle breeders in WA’s southwestern corner for use over Poll Hereford, Shorthorn, Angus, Murray Grey and crossbred cow herds to produce baby beef for the Perth domestic market.

A Gelbvieh society national councillor for the past nine years, Mrs Fleming harbours a deep interest in helping young people with a passion for the stud industry, and Gelbvieh in particular.

She has forged a working relationship with Gelbvieh youth member, Jesse Joseph, who runs a small Gelbvieh stud herd at Rocky Creek, near Lismore in northern NSW.

Jesse already has the Glendale show heifers under his care near Lismore, having completed the first part of their trek from WA at the end of February. They will complete the final leg from Lismore to Rockhampton later this week, having travelled a total of 5500km since leaving home.

“We love coming over for such a big show as the Beef Expo, and spend a lot of time looking over all the different cattle. We want to be a part of it, and it helps showcase the quality of cattle we have back in WA,” Michele said.

The Gelbvieh breed has so much to offer the beef industry, but still went largely un-noticed, she said.

“They have changed a lot since they first arrived in Australia in the 1980s, to suit location conditions and market requirements. They are a lot softer and easier-doing cattle now, while retaining their exceptional mothering ability.”

Gelbvieh stud entries for Rockhampton this year total will total close to 30 head.

The Thompson family in the past has also competed in stud beef at Rockhampton in 2009, 2012 and 2015. It’s understood there will be quite a contingent of WA beef people making the trip across for a look at Beef 2018 this year.