Mr Grey and his family operate Glenflorrie, an extensive cattle property in the state’s West Pilbara region covering about 330,000ha, including a sub-lease. 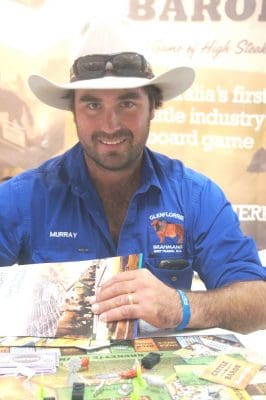 Pilbara, WA cattleman Murray Grey, from Glenflorrie Station, with some of the brochures he collected from ag tech exhibitors around the Beef 2018 trade displays

Having been to three previous Rockhampton Beef Expos, he was in a good position to note the momentum that has built in the ag tech space recently.

“I’ve been wandering around the grounds for the past two days talking with people we’ve already been involved with in trial work, and also trying to soak-up what else is coming to market in this space,” he told Beef Central during a visit to our site to buy a copy of Cattle Baron.

“What the ag tech exhibitors at Beef 2018 have told me is that in contrast with previous events where there were a lot of tyre-kickers and passing interest in an interesting concept, this year, producers are rolling up saying, I like what you’ve got; how can I roll this out on my place?”

“The big difference is that now, they are ready to invest.”

Despite its remote location, Glenflorrie has been an early-adopter in ag tech. Given the property’s scale, much of that has primarily focussed on labour savings and efficiency of operations. A full run checking waters, for example, is a 400km round trip.

“For cost efficiency reasons, UHF connection works best for us, although satellite connectivity is getting a lot cheaper, and the opportunity is now there to maybe integrate some satellite-driven monitoring systems as well as UHF,” Mr Grey said.

“The impact already has been fantastic. We’ve been able to minimise the amount of time stock are off water when we have a breakdown. Typically we were doing our mill runs once or twice a week, meaning three to seven days, but now with the monitoring stations, we can safely push that out to 14 days between physical visits – as long as the monitoring units are not showing a failure.”

“And if one does show a failure, we can respond immediately, and cattle aren’t staring at a dry trough. The industry is getting to a point now where there is no excuse, even in the most remote areas of the continent, for cattle to be off water for more than a few hours.”

“We now have the ways and means to stay well in front of any animal welfare obligations, and the system has tremendous advantage in terms of labour efficiencies,” Mr Grey said.

“We no longer have to do water runs quite so frequently, just for monitoring purposes. And if there is a breakdown, it’s easier to diagnose what the problem is likely to be. Our furthest bore is 85km one way – a 170km round trip – and if you have to do it twice because you don’t have the right spare part for a fix, it’s a problem. Now, we take all the bits that we know we’ll need to fix a water, the first time.”

Glenflorrie has also participated in remote walk-over weighing (WoW) trials, driven through the Ninti-One CRC and Precision Pastoral, and supported by MLA. 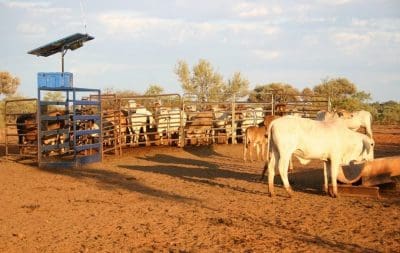 Autonomous walk-over weighing system in use on Glenflorrie

The property was the first WA trial site for WoW technology, producing what Mr Grey described as some “pretty large revelations.”

“Regular remote weighing gave us some valuable snapshots of where we were losing performance in our herd, and helped us reassess our feed on offer and carrying capacities in certain paddocks. It is very practical, useful information, especially when cattle weights recorded over the scales is combined with satellite imagery using NDVI (Normalised Difference Vegetation Index), against the animal growth pattern,” he said.

“It means we are making better strategic decisions on supplementation programs, and it also allows us to monitor growth rates of different genetic lines.

“It’s making it easy to recognise the best doers in a paddock, on the same feed and water – one steer doing a kilo a day gain, and another doing 0.4kg. Picking that cow (or bull) with the good growth genetics, and that’s the one we want to breed from.”

Added to that was the ability to draft on weight using the WoW system, and it avoided the need to physically go into the paddock and bring cattle to the yards.

“We’re finding a massive gain through not disrupting the whole herd’s routines by having to muster and push them through the yards unnecessarily. This way, we only harvest the animals we want into a holding yard and the others continue on their merry way.”

While Mr Grey said the expansion and development of the WoW and remote monitoring technologies with which he has been involved had been ‘fantastic to watch’, he now has his sights set on other technologies that may be of value in extensive cattle applications.

“For us, one of the next steps we’re interested in is virtual fencing. Potentially, it may work even on the scale that we operate at.”

“If we could incorporate virtual fencing with walk-over weighing, we could graze animals on a selected area, and the moment weightgain begins to falter or reaches a trigger-point, we could move them on. Essentially, that could all be done, one day, from the office.”

Aged 32, Mr Grey said these were “exciting times to be in beef” for young people.

“For those of us in remote areas, management changes do not always happen at a rapid pace, but I think we are only seeing the tip of the iceberg in this whole ag tech development area.”