There have been some rises in direct consignment cow grid offers in southern Australia over the past week, but the challenges surrounding getting cattle out of waterlogged paddocks and across flooded creeks to plants make the price adjustment something of a moot point.

Plenty of processors told Beef Central they have good commitments for cattle on their books, but access remains the key. A number of operators from Central Queensland to South Australia will miss working days again this week, due to the weather conditions.

The 2022 season could still end with a flourish if conditions did start to dry out in coming weeks, due to the backlog of cattle – but with more widespread rain across central and southern Queensland and parts of NSW in the past 48 hours, that is looking increasingly less likely.

More likely is a very solid start to processing operations in January 2023, if weather conditions allow, as a bunch of slaughter cattle left over from this year are likely to be carried-over.

Northern grids steady, advances in cows in the south

Grids seen this morning for kills in coming weeks in Queensland have four-tooth steer at 745-755c/kg (upper limits include some HGP-free cattle), and heavy cows 690c.

In southern states, some quotes have gone up 10c/kg on cows and steers last week, now sitting at and 740c/kg for heavy cows, with four tooth HGP-free grass bullock 815c/kg (805c for implanted).

Despite that rise on southern cows, if anything there’s been a larger gap open up between cow and steer price over the six weeks, due largely to the current relative strength of the domestic market over exports (where cow-beef demand is higher).

Warmer weather and the annual footie finals season barbecuing have been given as reasons for rising beef demand out of Australian domestic consumers since early-October.

For lengthy periods earlier, the gap between heavy cows and four-tooth ox was only 50-60c/kg in some processor grids, but in some areas the differential is now out to 75c/kg.

Long delays are being experienced in weekly national slaughter reports in recent weeks due to weather and other factors.

The week ended 21 October saw a sharp rise in processing operations to 95,678 head, but that came on the back of five consecutive weeks impacted by rain and flooding, public holidays, or a combination of both. Incredibly, there have been only three weeks this entire year where national beef kills have crept (barely) above 100,000 head.

According to the regular calculation carried out by analyst Matt Dalgleish from Episode 3 (previously Thomas Elder Markets), processor margin losses during September blew out to $377,* after narrowing to a loss of ‘only’ $214 per head back in July, due to softer domestic cattle prices.

Throughout the balance of winter and into spring, margins have eroded further, however, due in part to rising slaughter cattle prices.

This brings the annual average processor margin loss in Episode 3’s model to $298 per head, which is about $150 worse than would be expected based on the historic scatterplot of cattle slaughter to margin performance. 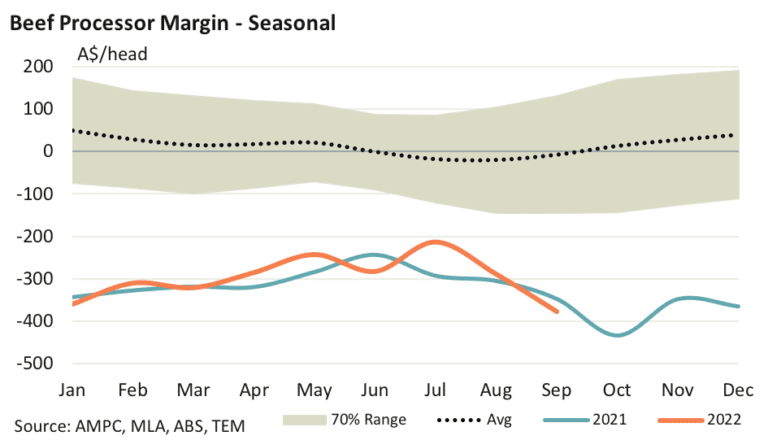 September’s loss of $377 per head was the lowest monthly margin recorded so far this year – although not the worst processor margin on record: that was seen in October 2021 when the loss slumped to $434 per head.

The historic monthly margin since 2000 is shown below and highlights just how sour the current situation has turned for beef processors, according to the processor margin model, with much of 2021 and 2022 spent in extremely poor margin territory.

Analysis of processor margins as a proportion of the national heavy steer price are probably a better way of looking at the margin trend, as this compares margins relative to cattle prices, so it takes into account that cattle are more expensive these days. 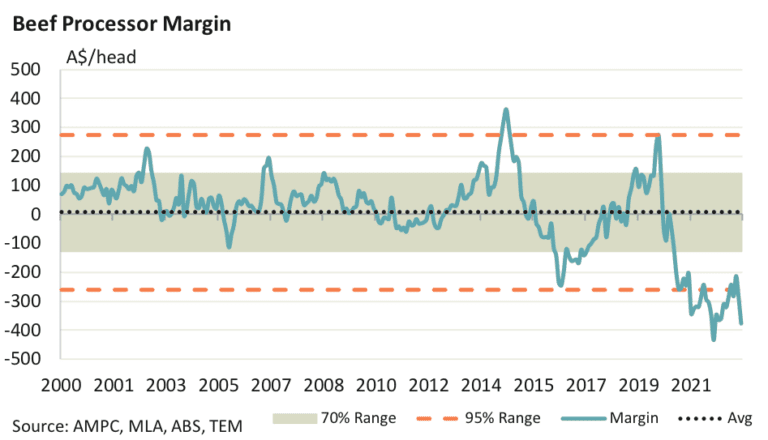 A comparison of the annual cattle slaughter levels to the average annual margin highlights that the current level of beef processor losses are beyond what would be anticipated, according to the line of best fit. 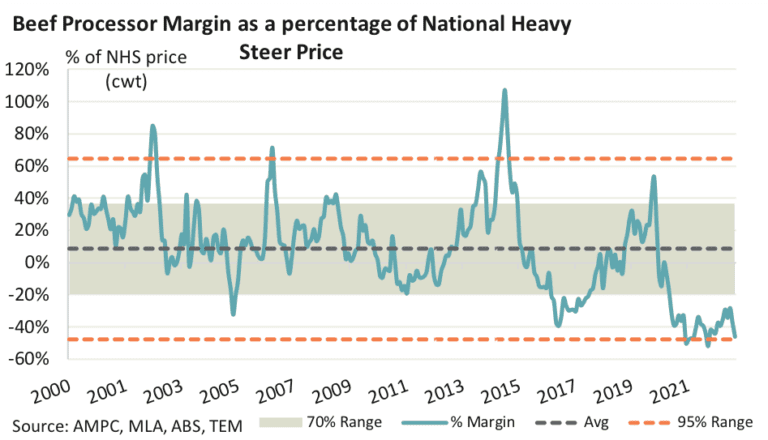 With cattle slaughter forecast at 6.6 million head for 2022, an annual average processor loss closer to $150 per head is what would be expected, but with margins heading south into spring it will take a decent turnaround in processor fortunes for the remainder of the year to get the annual average losses back nearer $150 per head and this seems unlikely, Episode 3 said in commentary.